Chameleon prawns change colors based on the season • Earth.com 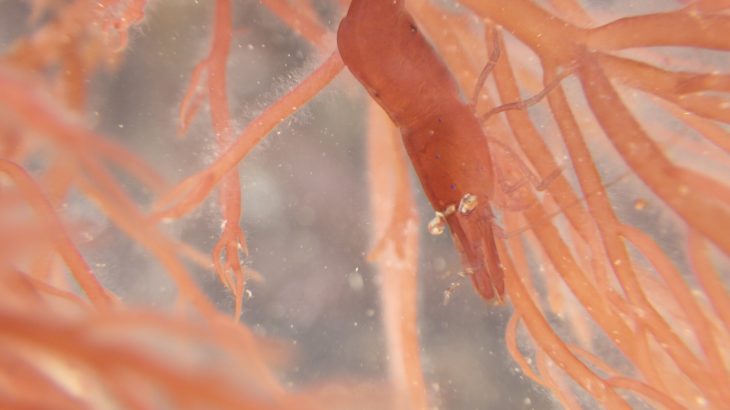 Chameleon prawns change colors based on the season

A study led by the University of Exeter has revealed that chameleon prawns can change color to coincide with seasonal changes in the surrounding seaweed. This camouflaging strategy is much different from chameleons or cuttlefish, which rapidly change their colors. Instead, chameleon prawns take weeks to alter their appearance.

The new research shows that the camouflaging abilities of chameleon prawns are suited for the longer seasonal changes taking place around them. As for the short-term background changes, the researchers found that the prawns compensate for their lack of color-changing speed with their behavior by seeking out the seaweed that best matches their coloration.

“Our study shows that these prawns exhibit impressive levels of camouflage on the seaweeds in which they live,” said co-author Sam Green. “We measured the camouflage of prawns to the vision of their predators and recorded color change in the lab, and found the prawns can improve camouflage against their new backgrounds over a number of weeks.”

“Seaweeds vary seasonally in UK rockpools and this ability probably enables prawns to maintain camouflage throughout the year. However, as the rock pool environment consists of a variety of different colored seaweed patches, our behavioral experiments show that the prawns also select backgrounds that match their existing appearance.”

“This helps maintain camouflage in the short term, helping prawns to deal with the challenges of rock pool life. For example, a wave could dislodge a prawn from its chosen perch. This demonstrates how color change and behavior combine to facilitate camouflage in varying environments over different timescales.”

Professor Martin Stevens noted that the rock pool environment is incredibly challenging because it is constantly changing every day and over the seasons. The combination of behavior and camouflaging ability helps the prawns survive in this dynamic habitat.