The cheetah is quickly vanishing from our planet • Earth.com 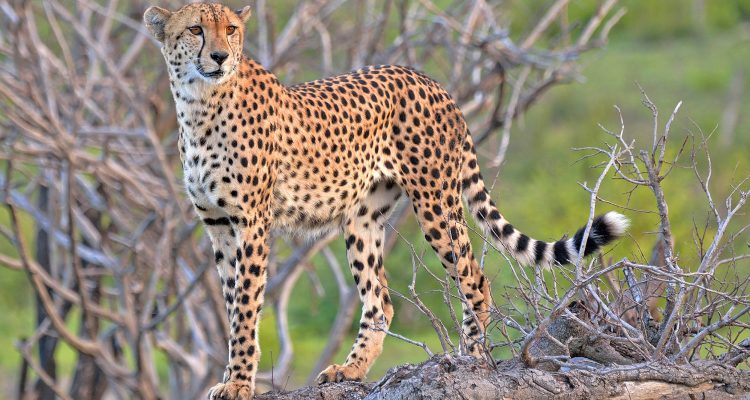 The cheetah is quickly vanishing from our planet

The cheetah, which is the fastest land animal in the world, is now at high risk of extinction. Known for its golden coat with black spots and amazing speed, this majestic creature is quickly vanishing from our planet.

According to an investigation led by the Zoological Society of London (ZSL) and the Wildlife Conservation Society (WCS), only 7100 cheetahs remain globally.

As one of the world’s most wide-ranging carnivores, the majority of cheetahs live in unrestricted and unprotected areas. This leaves them much more vulnerable to human pressure.

The WCS warned recently that the cheetah population has declined by over 85% in Zimbabwe and fewer than 50 remain in Iran. According to previous estimates, there were 100,000 cheetahs at the beginning of the 20th century.

“The cheetah is sprinting towards the edge of extinction and could soon be lost forever unless urgent, landscape-wide conservation action is taken,” ZSL said in a statement.

The authors of the study led by the ZSL and the WCS, including lead author Dr. Sarah Durant, are urging for the cheetah to be uplisted from ‘Vulnerable’ to ‘Endangered’ on the IUCN Red List of Threatened Species. When wild animals are classified as ‘Endangered,’ they usually get more international attention and support.

“This study represents the most comprehensive analysis of cheetah status to date. Given the secretive nature of this elusive cat, it has been difficult to gather hard information on the species, leading to its plight being overlooked,” explained Project Leader for the Rangewide Conservation Program for Cheetah and African Wild Dog Dr. Sarah Durant. “Our findings show that the large space requirements for cheetah, coupled with the complex range of threats faced by the species in the wild, mean that it is likely to be much more vulnerable to extinction than was previously thought.”

Major threats to the cheetah population including human-wildlife conflict, habitat loss, overhunting, and illegal trafficking of live cats have been largely overlooked.

“The recent decisions made at the CITES CoP17 meeting in Johannesburg represent a significant breakthrough particularly in terms of stemming the illegal flow of live cats trafficked out of the Horn of Africa region. However, concerted action is needed to reverse ongoing declines in the face of accelerating land use changes across the continent,” Durant stated.

Scientists are now urging for the creation and adoption of a new cheetah conservation approach that transcends national borders and utilizes existing regional conservation strategies.

Panthera’s Cheetah Program Director Dr. Kim Young-Overton stated, “The take-away from this pinnacle study is that securing protected areas alone is not enough. We must think bigger, conserving across the mosaic of protected and unprotected landscapes that these far-ranging cats inhabit, if we are to avert the otherwise certain loss of the cheetah forever.”