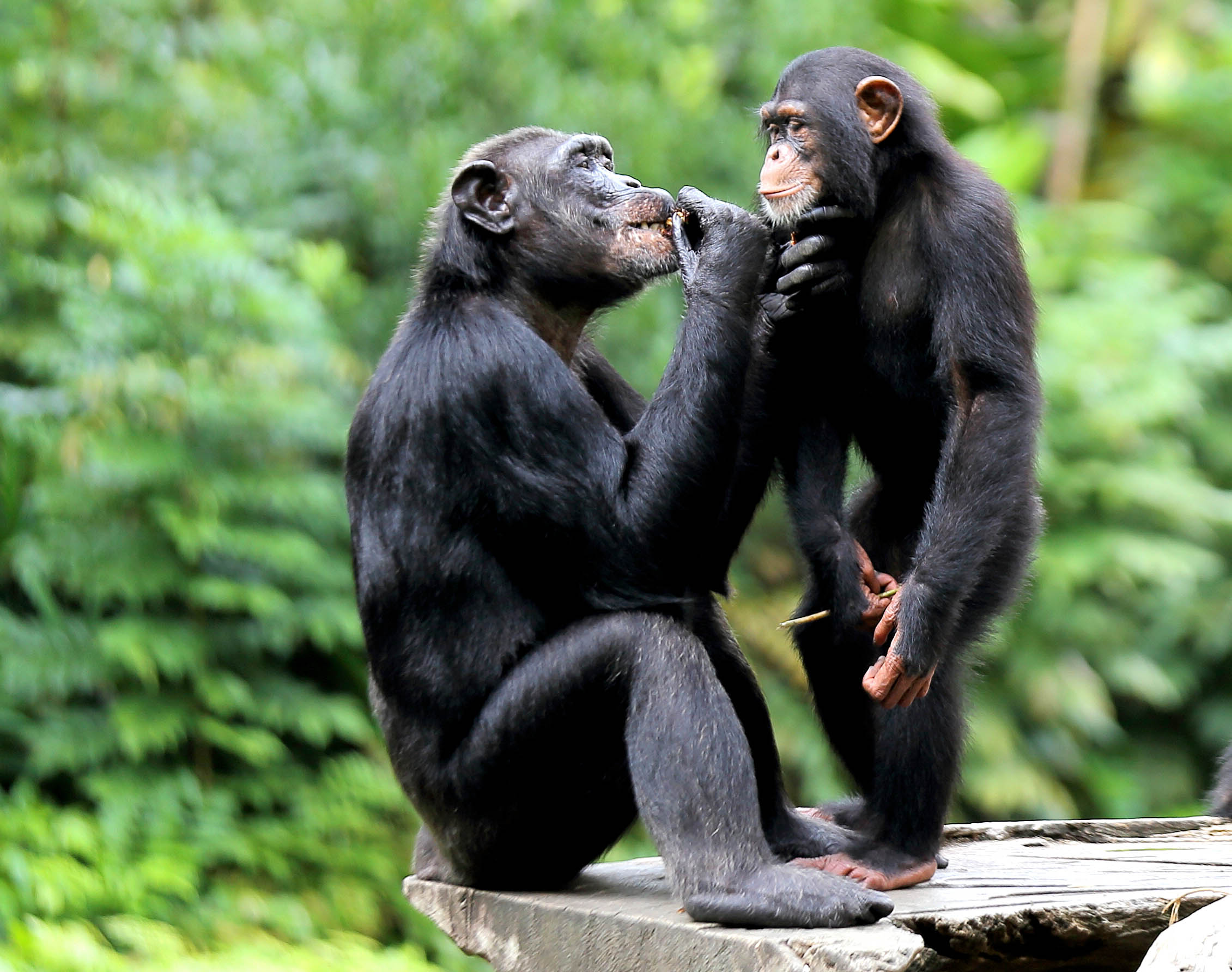 Just like humans, Chimpanzees learn how to behave from their mother’s.

A group of researchers led by Richard Wrangham from the Ruth Moore Professor of Biological Anthropology has shown, for the first time, that chimpanzees learn grooming styles from their mothers. Once learned, chimps continued to perform the behavior the same way, long after the death of their mothers. The study was published in Current Biology.

“I think what it shows is how strong the maternal influence is,” Wrangham said. “It’s very charming that our oldest known son was almost 40 years old, still doing what his long-dead mother did.”

Known as “high-arm grooming,” the behavior occurs during the regular grooming sessions chimpanzees engage in throughout the day. As two chimps groom each other, each raises one arm and either clasp hands or cross their arms as they continue to groom. These brief – sessions averaging only about 45 seconds are repeated as often as ten times a day.

But while grooming behavior is universal among chimps, high-arm grooming is not.

The behavior has been observed in eight chimpanzee populations across Africa; Wrangham said, each of which shows differing rates of clasping and non-clasping, but is notably absent in three other well-studied populations.

It’s not clear, however, whether any significance should be attached to those differences – at present, researchers have no clear answer as to why chimps engage in high-arm grooming, or what benefits they get from it.

“So what we wanted to understand was what’s responsible for the variation in palm-to-palm clasping,” Wrangham said. “When a young female joins a new group does she look at what everyone else is doing…and then do what the rest of the group does for the rest of her life?”

Wrangham and colleagues collected the most detailed data ever on how – and how often – chimps in a particular population engaged in high-arm grooming, and they quickly realized that nearly all previous theories about the behavior were wrong.

“This type of behavior, which seems so trivial in many ways – whether you clasp hands or cross arms – has been suggested as signaling membership in a group,” Wrangham said. “People often see these types of strange behaviors we see in chimpanzees and wonder if it is some sort of group identification sign.”

“Alternatively, people have suggested that maybe it signals a special type of social relationship if two individuals do it more often with one another. But what we’re showing with this paper is that none of the obvious possibilities figure out,” Wrangham said. “The pattern varies widely within the group, it’s not closely associated with friendship, it doesn’t vary by age or sex, and it does not depend on how long an individual has been in the community.”

He stated the only connection researchers were able to identify was the maternal one. The chimpanzees were imitating their mothers, not identifying with the community.

Like humans, young chimpanzees learn behavior from their mothers.

“Even when they’re adults, even after their mothers are long dead, they still do it the same way their mother did it,” Wrangham said. “This is the first time anyone has realized this, and the pattern is delightfully clear.”

“People may say it’s important because they stick to it,” he said. “But the alternative view is that no one in the group cares. There’s never rejection (when a clasper meets a non-clasper) – everyone has tended to think that this is something that would be seen more among individuals that have a strong alliance relationship, but it turns out to not be true.”

Wrangham states that this finding leaves several unanswered questions, with the hope that further study may yet yield insights into the behavior.

“Now that we know some families clasp hands as much as 90 percent of the time, and others do it only 10 percent, what happens when you get two individuals high-arm grooming together when one is a clasper and the other is not?” Wrangham said. “What is it that decides which pattern they will use? Is it dominance? Is it the higher ranking individual? The older one? Or maybe it is the one that initiates?

“Our current evidence suggests that neither dominance nor age carries sway. Eventually, I hope we can work out the social significance of this quirky behavior. If we can find a pattern for which individual “wins” when a clasper grooms with a non-clasper, maybe we will get a clue to why individuals do high-arm grooming at all.”