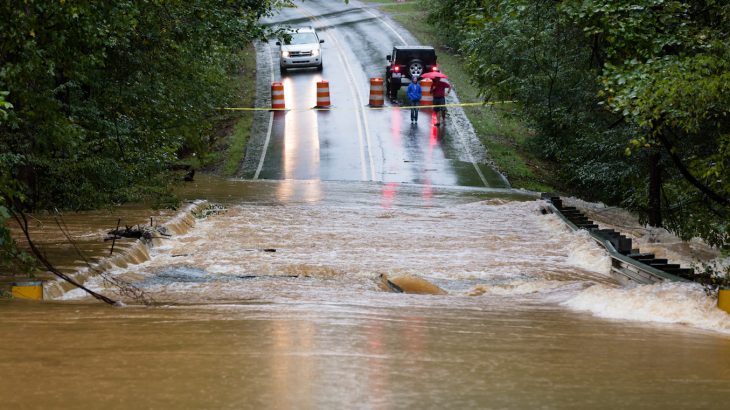 Report: Climate change to reduce the American economy by 10 percent

As temperatures, greenhouse gas emissions, and sea levels rise, we find ourselves coming closer and closer to the point of no return where no amount of climate mitigation will be enough to stem the rising tides, both literally and figuratively.

Not only will climate change threaten food security, infrastructure, and the environment, but now a new report offers an exhaustive breakdown of the increasing economic costs if climate change goes unchecked.

13 federal agencies conducted the Congressionally mandated report, and what’s most surprising is that the report came directly from a presidential administration at odds with even the idea of climate change.

President Trump and his administration have taken repeated steps to increase fossil fuel emissions, foster fossil fuel production, and reduce protected lands all in the name of economic progress.

But, this report, which was made public by the White House on Friday, predicts that climate change could shrink the American economy by ten percent.

The report estimates that by the end of the century, sea level rise alone could cost the US economy $118 billion, infrastructure damage could cost $32 billion, and severe droughts and heat waves could cost $141 billion in heat-related deaths.

No corner of the country will go unscathed as climate change could cause an increase in wildfires in both the southwest and southeast, and declines in trade and agriculture will put major stress on food security and imports.

The report even discusses climate change impacts for Puerto Rico and the Virgin Islands where coastal flooding could contaminate drinking water, according to the New York Times.

Extreme weather events could shut down factories abroad and drive up prices and demand for certain products in the US, and the report says that this may become a common occurrence in the future.

“Climate change is another risk to the strength of the U.S. trade position, and the U.S. ability to export,” Diana Liverman, a University of Arizona professor and co-author of the report, told the New York Times. “It can affect U.S. products, and as it drives poverty abroad we can lose consumer markets.”

One of the most worrying aspects of the report are the predictions for agricultural yields in the US which could decline to 1980s numbers.

“Rising temperatures, extreme heat, drought, wildfire on rangelands and heavy downpours are expected to increasingly disrupt agricultural productivity in the U.S.,” the report states. “Expect increases in challenges to livestock health, declines in crop yields and quality and changes in extreme events in the United States and abroad.”

Going forward, it will be interesting to see how this report will fit in the current administration’s strategy. Will the news help inform key emissions regulation strategies or will it simply be ignored until the next climate change report?

The agencies who conducted the report do offer several solutions to help limit the impacts of global warming including taxing emissions, regulating greenhouse gasses, and investing in clean-energy initiatives.

Whether or not these suggestions will be taken into consideration is another matter altogether.