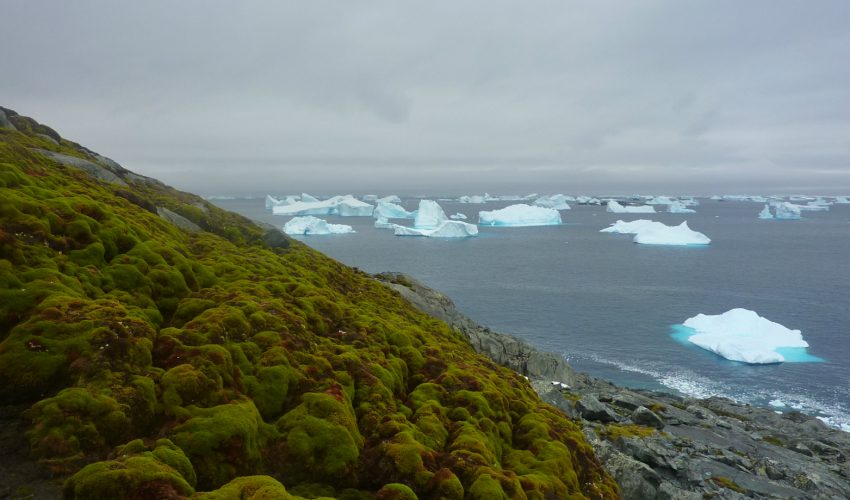 There is limited terrestrial life in Antarctica – plants only exist on approximately 0.3 percent of the continent. Moss, however, is part of the region’s year-round landscape. Weather patterns in Antarctica are rapidly changing, and moss banks are predicted to make the continent much greener if the temperatures continue to climb.

Temperatures are warming in Antarctica faster than almost anywhere else on the planet, and the ecosystem is changing as a result. Moss in Antarctica has expanded very quickly with the rising  temperatures. Scientists from the University of Exeter set out to get a more detailed account of this phenomenon.

The team studied the cores of moss from approximately 400 miles of land.

The cores are well-preserved in the cold conditions of the region. An analysis of the last 150 years – recorded in moss cores from 3 different sites – revealed that major biological activity has taken place over the last 50 years.

“Temperature increases over roughly the past half century on the Antarctic Peninsula have had a dramatic effect on moss banks growing in the region,” explained Dr Matt Amesbury of the University of Exeter. “If this continues, and with increasing amounts of ice-free land from continued glacier retreat, the Antarctic Peninsula will be a much greener place in the future.”

The change in weather patterns on the Antarctic Peninsula has been recorded in great detail, particularly since the 1950’s. The samples collected from this project, however, provide an even more extensive historical view of the climate change that has taken place here.

In 2013, the same research team recorded similar findings from a single site in Antarctica. As a result of the current study, the scientists learned that the rapid biological response to climate change was more widespread than previously thought, and could be applied to a much larger region.

“Although there was variability within our data, the consistency of what we found across different sites was striking,” said Professor Dan Charman, who led the study.

The research is published in the journal Current Biology. The team plans to expand this project by analyzing moss samples that are thousands of years old. By doing so, they hope to view how climate change affected ecosystems before human-induced global warming.