Even areas of cold permafrost are threatened by warming temperatures • Earth.com 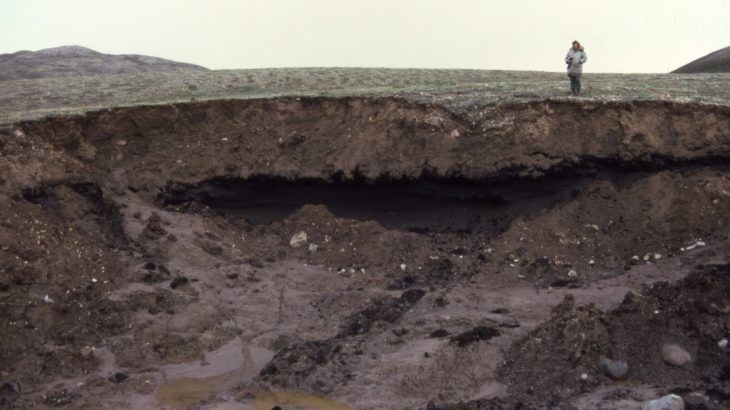 Even areas of cold permafrost are threatened by warming temperatures

According to new research from Antoni Lewkowicz, a professor in the Department of Geography, Environment and Geomatics at the University of Ottawa, Arctic permafrost is not as immune to rising atmospheric temperatures as previously thought. These findings are published in Nature Communications.

Lewkowicz and colleague Robert Way used satellite images from the Google Earth Engine Timelapse dataset to analyze and record a massive increase in the number of retrogressive thaw slumps — those being landslides caused by the melting of the ice in the permafrost — on the Arctic’s Banks Island over the last thirty years.

85% of the landslides on Banks Island occurred after four specific hot summers in 1998, 2010, 2011, and 2012. The topmost layer of the permafrost thawed during these four years, and Lewkowicz predicts that it’s likely to again as global warming continues to progress. In fact, Lewkowicz estimates that 10,000 new slumps could occur on Banks Island alone per decade and continue to grow.

The effects of these slumps are detrimental to surrounding water systems. Sediment runoff from the landslides has clogged river valleys and piled up in over 250 lakes on the island. Frozen material then thaws and breaks down in these ecosystems, releasing methane and carbon dioxide, therefore increasing greenhouse gas emissions. Because there is no baseline data for these water systems and ecosystems, the impact of slumps on island aquatic life is unknown.

Furthermore, the Inuvialuit community on the island has noticed how the slumps have affected their mobility and access to areas, which has therefore impacted their hunting and fishing.

“We cannot stop thousands of thaw slumps once they start,” Lewkowicz said. “We can only make changes in our own lives to reduce our carbon footprint and we can encourage our politicians to take the necessary measures to help reduce our greenhouse gas emissions, so that future warming is as limited as possible.”