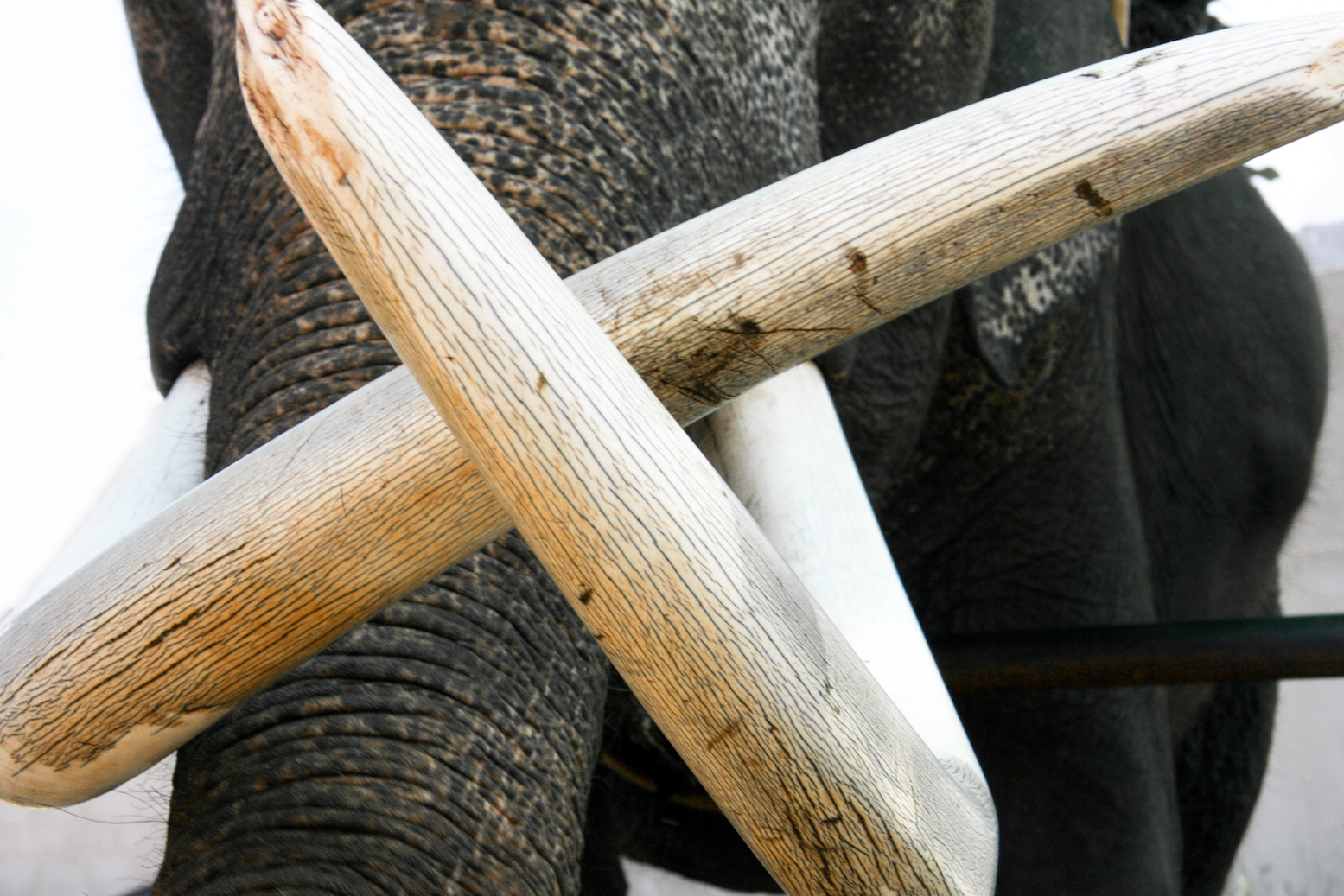 Commercial paleontology can quickly drift into moral grey areas.  Many people question the practice of selling fossils for profit at all.  I would counter this by saying that museums also sell and buy fossils, and targeting commercial dealers artificially divides industry from academia.  In fact, museums are often clients of commercial companies I’ve worked for.

Having worked in commercial paleontology for years, I have found that most in the field are able to distinguish scientific valuable finds from those less useful, and target academic organizations to acquire those fossils beneficial to science.  I’m also a bit hesitant to let government decide how people will deal with everything discovered on private land, as public land is completely out of the reach of law abiding commercial paleontology. Personally, I feel public land should remain public in all aspects.

Ivory plays an interesting role in the debate over commercial paleontology.  In a business showroom I recently visited, enormous tusks arch in simple metal stands.  Other tusks are intricately carved with leopards and mammoths. The tusks are mammoth tusks, but if they were from animals killed by humans, the killing happened before recorded history.

But how to distinguish mammoth ivory from elephant ivory?  Some states, including California, have banned the sale of fossil ivory such as mammoth ivory to completely avoid mistaking elephant ivory for mammoth ivory.  The law in California was challenged in court by the Ivory Education Institute in November 2016, but was ultimately was upheld by the Los Angeles Supreme Court.

The non-profit Ivory Education Institute argues that elephant ivory trade is already blocked by international treaties and that the California law is ‘superfluous’. The Institute says that banning ivory trade of all kinds won’t stop poaching, and a list of historical bans that failed is cited.  Prohibition didn’t stop Americans from drinking, the war on drugs hasn’t stopped us from getting high, etc. The Ivory Education Institute argues that the only way to stop poaching for ivory is for demand to be met through normal, legalized trade.

It seems there may be some truth to the idea, if a small one.  In states like Alaska, where fossil ivory is plentiful, you can buy pieces of jewelry featuring mammoth ivory for relatively cheap.  The Ivory Education Institute goes on to argue that making ivory illegal increases scarcity, which in turn makes the existing ivory more valuable, increasing the incentive to poachers.  Diamonds come to my mind, naturally rather plentiful, some companies hoard diamonds, creating artificial scarcity and inflating their value.

Elephants are living animals.  If someone was torturing an animal for sick pleasure, I would not pause to try my best to stop them.  Outsiders imposing bans on ivory in Africa is in some ways harkening back to imperialism. The international ban on ivory though, is more like the ban on human trafficking: a moral imperative.  Further, banning the trade of ivory in the US or in California specifically says nothing about what Africans do in Africa. The truth is that different African nations have taken different approaches, such as Zimbabwe’s attempt to create a sustainable ivory trade.  Of course, without the ability to export ivory, what is done in Zimbabwe or South Africa is of limited use for their own trade.

Others have argued quite forcefully that legal trade in ivory, or indeed, in anything, fosters a black market.  If any ivory is legal, it creates the problem of verifying the status of any ivory, opening the door again to poachers.

The Ivory Education Institute has a point, though; few legal bans have created lasting change.  For lasting change, we may look at something else: how views change. At one point, birds were at the whim of the fashion industry.  During America’s Gilded Age, hats, pins and other fashion items featuring feathers or sometimes entire birds were the height of women’s fashion.  Plume hunters that killed wild birds for their feathers made quick cash for their trade, with little care for the negative aspects. At least one early wildlife ranger was murdered for trying to protect birds from gangs of plume hunters.  It’s estimated that in 15 million birds were killed for their feathers.

Wildlife refuges, including those protected by rangers to the death, were partially established to give birds a chance to survive in the face of plume hunting.  Bird City, a private reserve in Louisiana by Edward Avery McIlhenny, Tabasco Sauce heir, was established partially in response to plume hunters nearly wiping out Snowy Egrets.  Some surviving Snowy Egrets were taken to Avery Island where the refuge was located and introduced first through an aviary and then set free so they could continue their migration.

Acts by the government and private individuals such as Avery did something more important than give birds safe breeding grounds.  Slowly through, public acts of compassion toward wild birds through pamphlets blasting the trade in feathers and speeches, things changed.  What ended up saving birds like the Snowy Egret wasn’t so much a ban in the feather trade. Laws, such as the 1900 Lacey Act prohibiting transport of birds across state lines that were killed in violation of state laws, didn’t stop the feather trade.  What happened is that slowly American women had a collective change of heart. Culture changed. It’s not just feathers either, it’s the fur trade as well. Furs are still sold even if they’re often socially taboo.

The stance of The Ivory Education Institute is repulsive, not so much because it doesn’t have a certain logic to it.  I find the argument that ivory is a natural resource disgusting but it isn’t surprising. Conservationists talk of trees, rocks, minerals, fossils even hunted animals as ‘resources’ all the time.  The problem is viewing elephants, trees and even the Earth as a thing. This is a problem that we must fix in the ‘hearts and minds’ of every person in the world. We must collectively learn empathy and compassion for others and for the earth itself.