Conservation vs agriculture: The battle over water in California • Earth.com 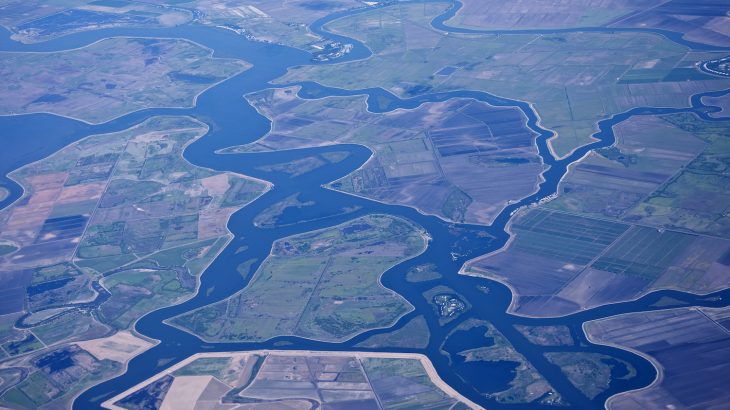 Conservation vs agriculture: The battle over water in California

It started with President Donald Trump, who ordered the Bureau of Land Management (BLM) to maximize water for the farmers of the San Joaquin Valley as drought and climate change continue to plague the arid western United States.  Evidence shows that fish in the estuary of the Sacramento-San Joaquin delta are in decline. Despite this, Trump’s plan proposes to pump water from the delta southward. The plan is largely supported by agri-business that would potentially profit from more water.  Those opposed to the Trump plan include commercial fishermen that would suffer as well as environmentalists and those concerned with water quality near the delta itself.

As for now, the Sacramento-San Joaquin Delta is part of an ecosystem supporting a diversity of species despite the human impact of water usage.  The Water Education Foundation reports that the delta is home to more than 55 fish species as well as more than 750 wildlife and plant species.  Four separate runs of Chinook Salmon spawn in the San Joaquin River, identified by the different times of year they cross under the Golden Gate Bridge.  The Winter-run Chinook Salmon are an endangered species and the spring-run Chinook are a threatened species. In addition to the native species, there are over 200 introduced species living in the area.  Invasive species include fish that were introduced for fishing.

Competition from exotic species along with contaminants, water usage and overfishing have led to a decline of native wildlife in the delta.  Studies from 2002 and 2004 have shown a decline in pelagic species and especially a decline in juvenile striped bass and Delta smelt. The Delta smelt is a small, three inch long fish found only in the Sacramento-San Joaquin delta.  The smelt is naturally vulnerable, besides living in such a small area, it has a lifespan of only one year and has a limited diet. Overall the decline of the delta due to human causes has led to 100 wildlife species, 140 plant species and 13 fish to be protected in one way or another by state or federal regulation.

The Mercury News reports that the California state government is trying to block the Trump administration’s plan to allocate less water to the fragile Sacramento-San Joaquin Delta. Currently, as little as 20% of the San Joaquin River reaches the ocean, making it one of the most overused rivers in California.  Preliminary proposals by California’s State Water Resources Board would raise the amount of water reaching the sea to 45-65%. More detailed water usage plans are to follow.

Trump won support of the California farmers he would now supply with water, saying on the campaign trail, “It’s is ridiculous where they’re taking the water and shoving it out to sea.”

Now it appears President Trump is trying to fulfill promises by promoting a maximum water delivery plan.  Unfortunately for the president, the state of California has very different ideas on how to allocate water.

The Sacramento Bee reported last year on a new plan for water allocation in California.  California’s State Water Resources Control Board boldly proposed allocating less water for humans and agriculture and more for fish.  The board cited the decline of several fish species and the possibility of a looming environmental catastrophe as justification for the plan.  Not only does allowing more water to flow to the sea support wildlife and communities in the delta region, it also allows more water to refill the ground water, including aquifers that are being used for agriculture.

The plans by the board are also in conflict with plans by California’s former governor Jerry Brown, who proposed new pipes in the Sacramento-San Joaquin Delta to move water south.  Under Jerry Brown’s plan, water flow of the San Joaquin to the sea would increase to 30%-50% of its natural state.

For an idea of the impact of less or more water flow into the Sacramento-San Joaquin Delta, it’s helpful to look at salmon numbers of salmon caught that were hatched during historic drought conditions.  Fish Bio reports that salmon and the profits made from fishing them declined from 2013 to 2015. The profit from commercial salmon fishing in 2013 was $244 million in economic impact and $104.5 economic impact from recreational fishing.  Those numbers dropped to $88.4 million economic impact for commercial fishing and $33 million for recreational fishing in 2015. The fish being caught in 2015 were hatched during drought conditions. The other side of the issue is farmers who feel more water would help them succeed.

According to the Public Policy Institute of California, agriculture in California produced $50 billion in sales in 2017.  California farmers also use 40% of available water, while cities use only 10% of the state’s water, and the rest is categorized as ‘environmental’.  Farmers have steadily shifted to crops that create more profits and jobs per share of water, the financial value of farming more than doubling since the 1960s when adjusted for inflation.  Still, other businesses in California have grown, overshadowing agriculture which now is only about 2% of California’s economy. The main issue is still that everyone needs water and every industry is dependent on agriculture to feed workers at very least.

Efficiency in water delivery systems has improved, with water being more often delivered with drip and micro irrigation systems than the previous flood systems.  Unfortunately the new systems also leave no water to seep back in and recharge ground water, leading to an overall drop in ground water levels. Farmers are also growing more crops like nuts, fruits and vegetables as opposed to grains, which create more income per acre allowing them to drill deeper wells, further decreasing the ground water levels.  Unfortunately these new crops are also thirstier and less drought resistant than previous crops. Nitrates from farm runoff have also started to damage the quality of groundwater.

California’s State Water Resources Board argues that agriculture and conservation can co-exist.  With the decline of quality water throughout California and the western US as a whole, it becomes obvious that extreme efforts at efficiency and good planning on the part of all parties is necessary.  We stand at a crossroads and the quality of life for humans and non-humans alike in the western US is at stake.