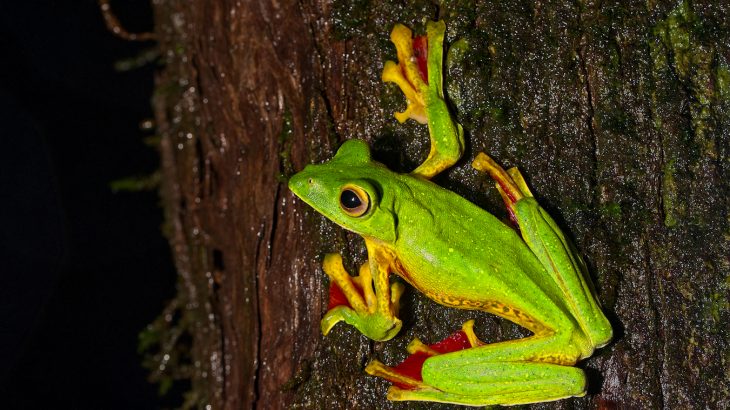 It’s easy to see that lizards and salamanders have similarities.  Their bones and basic body structure are remarkably similar. A major difference between the true groups of herptiles is of course skin the lizards are scaly while the salamander’s skin is smooth and porous.  These differences are obvious reflections of different lineages, those of amphibians and reptiles respectively. It’s clear that the evolutionary history of salamanders and lizards is very different from the outset.

It’s probably obvious that salamanders and lizards live very different lives.  Salamanders require water for at least part of their lives, while some species never leave water at all.  Lizards on the other hand are sometimes adapted to dry conditions as anyone who has spent time hiking in the desert of Utah can attest to.  Some lizards have go as far as evolving to never drink water, obtaining all their hydration from prey instead. Clearly the tailed quadrupedal body of both lizards and salamanders simply evolved for two separate types of life, not due to similar evolutionary pressures.  There are still some interesting cases of convergent evolution between reptiles and amphibians.

One type of salamander does actually resemble a specific type of lizard in what can be considered convergent evolution of tongues.  The Plethodontidae family of salamanders often referred to simply as the ‘lungless’ salamanders may seem at first blush nothing like chameleons.  However, as a paper in the Journal of Experimental Biology notes, some of these salamanders have extremely high powered tongue projection.

The tongue of these salamanders can be extended up to 80% of the animal’s total body length in just 20 milliseconds.  If you’ve ever observed chameleons for any length of time, you’ll have noticed that they too have projectile tongues used to capture elusive prey.  According to National Geographic, chameleon tongues average even longer at about twice the animal’s normal body length.  Not just tongues have converged in their evolution in reptiles and amphibians.

Prionosuchus is an extinct genus of amphibians that lived in what is now Brazil approximately 270 million years ago.  Brazil in the Permian when Prionosuchus lived wasn’t radically different from what we think of Brazil today: hot, humid and forested.  The amphibian was found with fish and other aquatic animals, so it certainly lived in the water like its extant relatives.

According to NewDinosaurs, Prionosuchus was a giant, measuring up to 30 feet long and weighing more than 2 tons when alive.  Most specimens are much smaller but the larger individuals would have been terrifying. The monstrous amphibian also had a long, thin snout lined with sharp teeth and a low, squat body with a wide tail adapted for swimming.  Interestingly, with its general body shape, aquatic lifestyle and tropical habitat, Prionosuchus resembles nothing so much as an extinct, amphibian crocodilian.  Indeed, it seems likely that Prionosuchus once inhabited the same ecological niche now occupied by crocodiles and alligators.  Other examples of convergence are out there.

Much has been made about the convergent evolution of flight and it is fascinating.  Birds, bats, pterosaurs and insects are not closely related but all have evolved the ability to fly.  It’s obvious with not much more than a cursory examination that the ways in which each of these animals fly is unique to their lineage.  An insect wing is nothing like the boney feathered wing of an eagle and neither is very much like the membrane spread over a modified hand that bats use to fly.  There is convergent evolution not just in flying but also in gliding.

So called flying squirrels are probably the most famous example of animals that regularly glide.  Mammals aren’t the only animals to evolve the ability to glide though, and much like the art of flight, it has evolved differently among different animals.  With flying squirrels, there is a membrane of skin between the limbs which allows the animal to glide.

The Malabar Gliding Frog (Rhacophorus malabaricus) evolved a different strategy.  The gliding frog is native to the Western Ghats, a mountain range in India where it lives a life in trees.  The frog can extend its large webbed feet when jumping and glide. Another tree frog, the genus Ecnomiohyla of Central and South America evolved to glide in the same way, an example of convergent evolution among different frog groups.  The lizard genus Draco has evolved a remarkably similar strategy to a similar problem though in a very different way.

Draco has a flattened rib cage which can expand beyond their normal configuration reports National Geographic.  With ribs extended, skin is stretched across them, making the lizard appear superficially like a flying squirrel.  Interestingly, Draco is also found in the forests of Southeast Asia, where the female lizards only venture down from the trees to lay their eggs on the ground.  The ability to glide is a useful one for quickly escaping predators or perhaps even catching prey.

There’s even a genus of snakes, Chrysopelea that evolved the ability to glide by flattening their bodies and undulating in a unique way.  These snakes are also native to the forests of Southeast Asia, a place that seems to be a hotspot for the evolution of gliding.  Southeast Asia is even the home to two genera of gliding geckos. Clearly there must have been a lot of danger lurking in the heights of Asia’s forests that gave an advantage to those animals that could leap away and glide to safety.  Or perhaps the ability to glide is an adaptation to being prone to falling. Either way, patterns that show up again and again in unrelated organisms tell us something important.

Convergent evolution shows us the extent to which the same physical limitations dictate our individual histories.  Each lineage may respond differently but sometimes it’s a response to the same problem, similar in effect to different engineers contriving unique solutions to the same problem.  The difference of course is that evolution is a natural process occurring without guidance over vast stretches of time acting on minute difference in genetics.