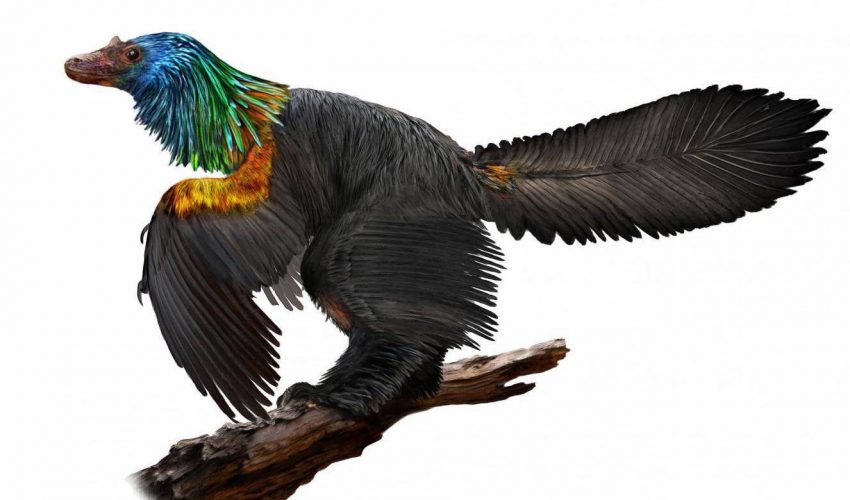 Scientists in China have examined the fossilized remains of a previously unknown, crow-sized dinosaur from the Jurassic Period. What makes this particular creature so unique is the fact that it had brightly colored feathers on its head, neck, and chest.

The ancient remains, which are estimated to be 161 million years old, were unearthed in northeastern China and then analyzed by an international team of researchers led by Dr. Dongyu Hu of the Shenyang Normal University. The dinosaur was named Caihong juji, which is Mandarin for “rainbow with the big crest.”

The fossil was found to be in excellent condition, making it much more useful for analysis. Chad Eliason is a postdoctoral researcher at the Field Museum in Chicago and co-author of the study.

“The preservation of this dinosaur is incredible – we were really excited when we realized the level of detail we were able to see on the feathers,” said Eliason.

Using a powerful tool called a scanning electron microscope (SEM), the scientists detected structures that closely resembled melanosomes, which are responsible for pigmentation. The shapes of the platelet-like structures were found to be much like those found today in hummingbirds, and indicated that C. juji had colorful feathers on its head and neck with darker feathers on the rest of its body.

“Hummingbirds have bright, iridescent feathers, but if you took a hummingbird feather and smashed it into tiny pieces, you’d only see black dust,” explained Eliason. “The pigment in the feathers is black, but the shapes of the melanosomes that produce that pigment are what make the colors in hummingbird feathers that we see.”

There is a growing collection of scientific evidence that today’s birds evolved from small, feathered dinosaurs. C. juji was a two-legged predator with a skull and sharp teeth like a Velociraptor, and most likely preyed on small mammals and lizards.

C. juji is the oldest specimen found with asymmetrical feathers, which help birds to steer during flight. But, while modern-day birds have these feathers strategically placed on the tips of their wings, C. juji had these feathers on its tail. This suggested to the researchers that the newly-discovered dinosaur could not fly, and that the feathers were used for warmth and to attract mates.