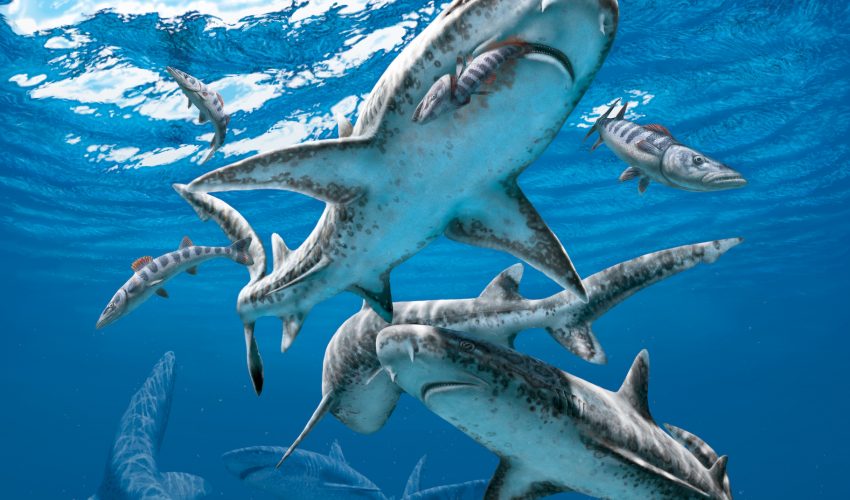 A single great white shark can lose thousands of teeth in its lifetime thanks to the several rows of teeth located within its jaws.

Fossilized shark teeth are somewhat abundant, and it’s through these that researchers can gain a better understanding of how the end-Cretaceous mass extinction event impacted shark diversity.

Around 66 million years ago at the end of the Cretaceous period, a mass extinction event wiped out all non-avian dinosaurs and completely re-shaped wildlife on Earth.

Without the dinosaurs and many other species and predators, food chains were rearranged and some species that were once less abundant had the opportunity to thrive like never before.

Researchers from Uppsala University in Sweden and the University of New England in Australia examined hundreds of fossilized shark teeth and found that shark diversity underwent a major change likely triggered by the mass extinction event that killed the dinosaurs.

Where before Mackerel sharks (lamniforms) like great whites ruled the sea during the Cretaceous period, they were soon replaced by Ground sharks (Carcharhiniformes) which is the most diverse shark group today.

There are over 200 species of Carcharhiniformes that exist around the world today, and something shifted at the end of the Cretaceous to allow for this switch in shark group abundance.

“Our study found that the shift from lamniform- to carcharhiniform-dominated assemblages may well have been the result of the end-Cretaceous mass extinction,” said Mohamad Bazzi, the project’s leader.

The researchers used analytical techniques to examine fossilized shark teeth, specifically focusing on variations of tooth shape between carcharhiniforms and lamniforms. Shark species’ diversity was then measured by calculating the disparity or variations of shape in the different teeth.

The researchers found that the two groups of sharks responded differently to the extinction event and lamniform diversity decreased while carcharhiniforms thrived.

“Carcharhiniforms are the most common shark group today and it would seem that the initial steps towards this dominance started approximately 66 million years ago,” said Bazzi.

One possibility for this reversal in shark species dominance may have to do with changes in food availability following the extinction event.

More research is needed to fully understand how shark diversity was changed at the end of the Cretaceous period but this study shows how tooth morphology (its shape and structure) can provide insight into an animal’s diet and evolutionary history.

“By studying their teeth, we are able to get a glimpse at the lives of extinct sharks,” said Nicolás Campione, an author of the study. “And by understanding the mechanisms that have shaped their evolution in the past, perhaps we can provide some insights into how to mitigate further losses in current ecosystems.”