Earth’s magnetic field may have taken longer to reverse than previously thought • Earth.com 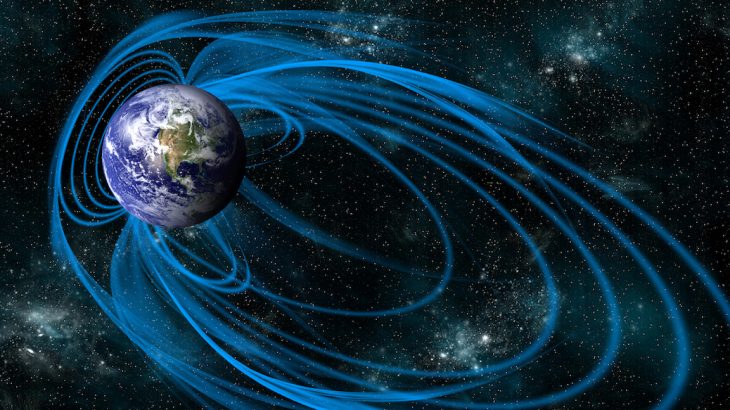 The last reversal of Earth’s magnetic field may have taken much longer to complete than previously thought, according to a new study.

Roughly every few hundred thousand years, the Earth’s magnetic poles switch, and research suggests that we may be overdue for another reversal.

Earth’s magnetic field is produced by spinning molten iron in the Earth’s core. The field protects the planet from harmful solar and cosmic radiation. A pole reversal could leave us exposed to this radiation, interfere with satellites, and even shut down power grids.

We depend on the magnetic poles, and yet researchers know very little about how and why field reversals occur.

Researchers from the University of Wisconsin-Madison examined lava flows, ice cores, and magnetic readings from the seafloor to piece together a complete picture of the Earth’s magnetic field during the last pole reversal, which took place around 777,000 years ago.

That reversal, called the Matuyama-Brunhes reversal, took around 22,000 years to complete, much longer than previously realized, according to the study published in the journal Science Advances.

“Unless you have a complete, accurate and high-resolution record of what a field reversal really is like at the surface of the Earth, it’s difficult to even discuss what the mechanics of generating a reversal are,” said Brad Singer, a geologist involved in the study.

The researchers collected and analyzed samples from lava flows in Chil, Tahiti, Hawaii, the Caribbean, and the Canary Islands.

“Lava flows are ideal recorders of the magnetic field. They have a lot of iron-bearing minerals, and when they cool, they lock in the direction of the field,” said Singer. “But it’s a spotty record. No volcanoes are erupting continuously. So we’re relying on careful fieldwork to identify the right records.”

The team reviewed data from Antarctic ice cores to reconstruct a record of the Earth’s magnetic field over a period of 70,000 years.

During the final stages of the last field reversal, the poles snapped into their new positions in just 4,000 years. However, this final stage was preceded by a long period of instability and partial reversals that took nearly 18,000 years.

As the magnetic field has consistently been getting weaker each century, there are concerns that we’re in the midst of an imminent reversal. But this study shows that while a weakening field is a tell-tale precursor to a pole flip, it may be sometime before the poles completely switch positions.

“I’ve been working on this problem for 25 years,” said Singer. “And now we have a richer record and better-dated record of this last reversal than ever before.”