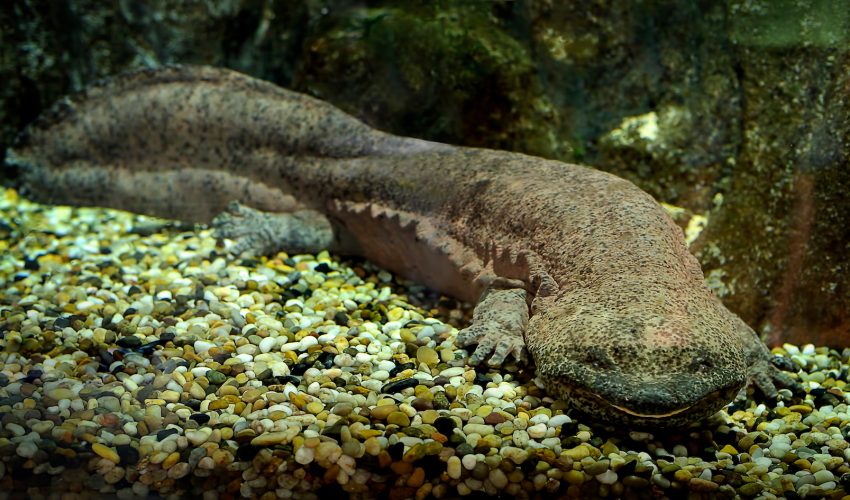 The Chinese giant salamander is one of the more prehistoric-looking animals that is still around today. These ancient creatures – dating back 170 million years – are amphibians that can grow up to six feet long and weigh 140 pounds. They’ve been depicted in Chinese culture for thousands of years, but have now become a highly coveted delicacy amongst the country’s wealthy. As a result, they have all but disappeared from their freshwater habitats.

In order to keep up with growing demand, these amphibians are routinely harvested from the wild in an effort to stock commercial breeding farms. China has officially banned the harvesting of wild giant salamanders, but supports widespread releases of farmed salamanders as a conservation effort. But this conservation measure may actually be harming wild populations by mixing genetic lineages and facilitating the spread of diseases.

Recently, a research team from the Zoological Society of London (ZSL) conducted a wide survey of river sites where the salamanders are known to live. These field surveys covered 97 sites in 23 Chinese provinces through a period of four years.

“We cannot confirm survival of wild Chinese giant salamander populations at any survey sites,” the authors say in Current Biology. “And consider the species to be extremely depleted or functionally extinct across the huge surveyed area.”

The researchers warn that these amphibians are in “catastrophic” decline, with only a handful potentially left in the wild. The species is already categorized as critically endangered in the International Union for Conservation of Nature Red List of Threatened Species.

“The over-exploitation of these incredible animals for human consumption has had a catastrophic effect on their numbers in the wild over an amazingly short time-span,” says Dr. Samuel Turvey, a member of the research team from the ZSL. “Unless coordinated conservation measures are put in place as a matter of urgency, the future of the world’s largest amphibian is in serious jeopardy.”

The salamander population has experienced a dramatic decline in the last few decades as a result of poaching and habitat destruction. But despite their status as an endangered species, this amphibian is still widely regarded as a delicacy. Luckily, recent legislation by the Chinese government has made it so anyone found to be eating this salamander could receive a jail sentence of up to ten years.

Co-author Dr. Fang Yan, from the Kunming Institute of Zoology, laments “It’s essential that suitable safeguards are put in place to protect the unique genetic lineage of these amazing animals, which dates back to the time of the dinosaurs.”