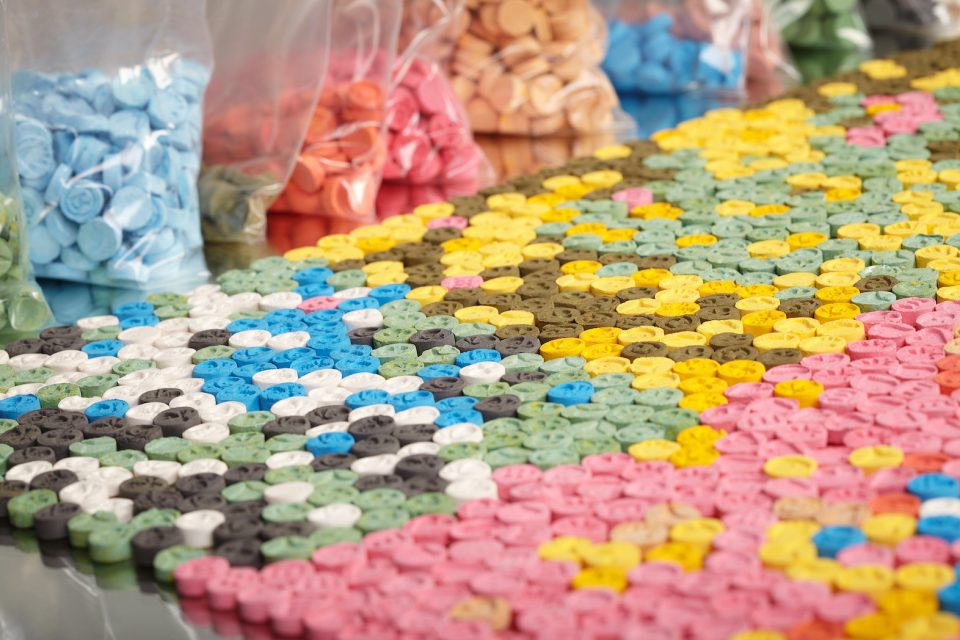 The protection of rare species and the illegal drug trade may at first seem entirely unrelated. However, the environmental impacts of illicit drug production are very real. Because these markets remain underground, they cannot be held accountable for their disastrous impacts on our planet. Currently, one tropical plant is being decimated to produce the illicit drug MDMA.

MDMA is an illicit drug also called ecstasy, E, or molly. It is a substituted amphetamine that acts as a stimulant and produces “empathogenic” effects. It is one of the most common illegal drugs with an estimated 12-24 million users yearly.

MDMA is a psychoactive compound that was first synthesized in 1912, but its effects in humans were not observed until much later. Sometime in the 1970s, the drug began to appear in recreational tablets.

Soon after, chemist Alexander “Sasha” Shulgin began researching the compound. Shulgin believed the drug had great potential for the treatment of mental health disorders. Around this time, MDMA was also gaining popularity as a party drug. As a result it was classified as a Schedule I substance by the DEA.

What is MDMA used for?

The effects of MDMA include stimulation, euphoria, and feelings of empathy and compassion. MDMA is known to make users more social and trusting, even if the user is an octopus! MDMA causes these effects by inducing the release of the neurotransmitter serotonin. This is the same system targeted by psychedelics as well as some antidepressants (SSRIs).

MDMA is best known as an illegal drug used at raves, festivals, and clubs. In these settings, MDMA can pose health risks to users. The illegal production and distribution of MDMA allow criminals to substitute drugs such as crystal meth and bath salts for MDMA. These drugs are often far more dangerous than pure MDMA. This risk is worse in the US where drug laws are stricter.

Real MDMA can still pose health risks. Increased body temperature, dehydration, and depletion of the neurotransmitters serotonin and dopamine can cause long term damage. Repeated use has been shown to produce neurotoxicity in primates. Unlabeled products of varying potency make overdose a significant risk. Addiction and dependence are also risks associated with MDMA. Visit the non-profit Dancesafe if you are interested in learning about reducing harms of MDMA use.

In recent years research on MDMA has experienced a resurrection. Initial studies indicate that MDMA has great promise for treating psychological disorders including PTSD and depression.  MDMA is used as an adjunct to therapy to increase openness. In a controlled setting with pharmaceutical grade MDMA, these treatments are very safe.

How is MDMA produced?

There is a huge international market for MDMA. 17 million Americans (6%) report having tried MDMA. It is estimated that 100-125 metric tons of MDMA are consumed each year. This is the equivalent of over 1 billion doses. Though estimates vary, the MDMA market is definitely in the billions of dollars. The existence of this black market helps fund and empower dangerous criminal organizations globally.

Like most illicit drugs, MDMA is produced in clandestine labs with no regulation or oversight. These labs exist all around the world. They rely on heavily controlled compounds as the building blocks for MDMA synthesis. The production of these precursors is threatening a rare Cambodian tree and the wildlife refuge in which it is found.

The most common MDMA precursor is safrole. This oily chemical is produced by various plants including Sassafras (the traditional flavoring for root beer.) Sassafras and other safrole containing plant extracts have been used in traditional medicine as well.

Sassafras oil was banned for consumption in the US in 1960 by the FDA due to mounting evidence that it is carcinogenic. This compound is produced by a handful of other plants as well.

The forests of Southeast Asia are home to many unique and rare species. Cambodia has vast protected forests that are home to many species seen nowhere else in the world. The Cardamom Mountains of western Cambodia are no exception.

To preserve the natural resources of this region, the Cambodian Ministry of Environment and Forestry has protected the 1,300 square miles of Phnom Samkos Wildlife Sanctuary. This wildlife sanctuary is home to 62 threatened animal species and 17 threatened tree species. In addition, 30,000 indigenous people live within the sanctuary and rely on the forest for their livelihoods.

Amongst this treasure trove of diversity is a tree called Mreah Prew Phnom (Cinnamomum parthenoxylon). This tree is endemic (found nowhere else) to these forests. Nearly all of them grow within the Phnom Samkos Wildlife Sanctuary. This species has not been well researched, and the IUCN has too little data to determine it’s population status.

What is known is that Mreah Prew Phnom is disappearing at an alarming rate. This Cambodian tree shares something with American Sassafras. The roots of this tree contain safrole. Because of this, the tree is being dug up and harvested to produce safrole oil for the illegal manufacture of MDMA.

Though it has been illegal to harvest this plant in Cambodia since 2004, the practice continues. Illegal factories operate within the forest. Trees are uprooted, and their roots are shredded. These safrole containing roots are extracted and then the safrole is distilled. Distilled safrole is then smuggled out of the country to laboratories that produce MDMA.

Environmental destruction on a massive scale

In order to produce a barrel of safrole, four Mreah Prew Phnom trees are killed. In addition, each tree harvested requires six more trees to be felled for firewood to power the extraction.

The scale of this deforestation is revealed by the amount of safrole seized by authorities. In one bust in 2008 1,278 barrels were seized. This equates to over 5,000 Mreah Prew Phnom trees and 7,000 other trees burned for fuel. The rate of destruction could wipe out the rare Mreah Prew Phnom trees in as little as 5 years.

This industry harms the environment in many ways. Operating unregulated, clandestine factories in the middle of a protected wildlife reserve has dire consequences. Dead fish and frogs float in the rivers downstream from these factories. The distillation of the oil requires cool water to condense the final product. The makeshift distillation equipment in these facilities leaks the carcinogenic safrole into the water. The pollution of these factories threatens the many rare and endangered species in these forests.

These practices also affect the indigenous residents of this Wildlife Sanctuary. Poisoned water sources, damaged ecosystems, and risks of violence all threaten these people.

The safrole extraction industry is run by large criminal organizations. These groups are associated with human trafficking and wildlife poaching. Because of their unregulated, illegal nature, these facilities are heavily guarded. Land mines are even used to deter unwanted attention.

The Cambodian Ministry of Environment and Forestry has a 50 ranger patrol for this wildlife sanctuary. Though they have had many successful busts of clandestine factories, it is a very dangerous job. Multiple rangers have been murdered in Cambodia after encountering illegal activity.

The international war on drugs has created this illegal industry, and its operation is in the hand of criminals. These organizations operate outside of international regulations and protect their interests with violence. The illicit and underground nature of these groups prevents any accountability for their actions.

This story raises an important question. Who is benefiting from the prohibition of these drugs? Natural resources and disadvantaged people are exploited. Extreme violence is used to protect profit. Governments spend massive amounts of money attempting to fight these organizations. Street drugs are more dangerous. Treatment is less accessible to those in need.

Kingpins, human traffickers, poachers, and other criminals profit, while violent criminal organizations are the actual winners in the war on drugs.