Frogs have lungs that cancel out background noise • Earth.com 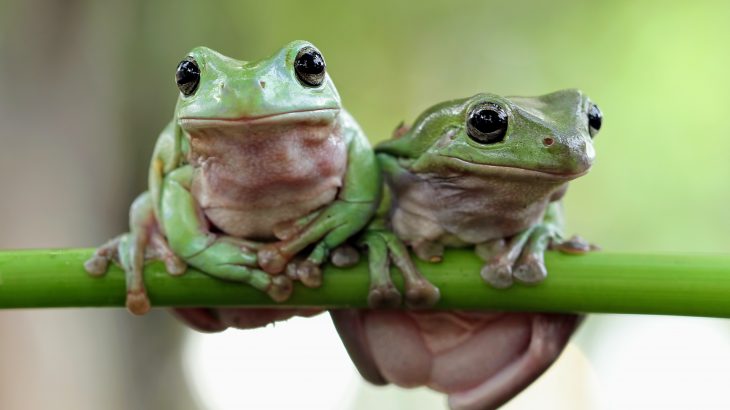 Vocal signals are key to reproductive success among frogs, but how do females hear the mating calls produced by males against a noisy background? In a new study published by Cell Press, experts have discovered that frogs have lungs that act like noise-canceling headphones.

When the lungs are inflated, the eardrum’s sensitivity to environmental noise in a specific frequency range is reduced. According to the researchers, this makes it easier for female frogs to hear the calls of males from their own species.

“In essence, the lungs cancel the eardrum’s response to noise, particularly some of the noise encountered in a cacophonous breeding ‘chorus,’ where the males of multiple other species also call simultaneously,” said lead author Professor Norman Lee of St. Olaf College.

The specialized function of the lungs produces an effect known as “spectral contrast enhancement.” The effect makes the frequencies in the spectrum of a male’s call stand out against noise at adjacent frequencies.

“We believe the physical mechanism by which this occurs is similar in principle to how noise-canceling headphones work.”

The researchers explained that frogs possess a unique sound pathway that can transmit sounds from their air-filled lungs to their air-filled middle ears through the glottis, mouth cavity, and Eustachian tubes. While this sound transmission pathway has been previously described, its function has remained a mystery.

Some studies have suggested that the lungs may increase the degree to which eardrum vibrations are direction dependent, which would improve a frog’s ability to hear mating calls.

However, the current study has produced a different explanation. The experts found that while the state of the lungs’ inflation appeared to have no effect on directional hearing, there was a substantial impact on the sensitivity of the eardrum.

When a frog’s lungs were inflated, the eardrum vibrated less in response to sounds in a specific frequency range. This led the researchers to speculate that the lungs were dampening vibrations, and canceling out noise as a result.

The study ultimately confirmed that inflated lungs in green treefrogs make it harder to hear the calls of other species, but do not affect their ability to hear their own species.

“Needless to say, we think this result – a frog’s lungs canceling the eardrum’s response to noise created by other species of frogs – is pretty cool!” said Bee.

According to the researchers, the findings demonstrate the power of evolution to co-opt pre-existing adaptations for new functions. Going forward, they plan to further investigate the physical interaction between the various sources of sound that influence the eardrum’s sensitivity. The experts also want to explore how widespread noise cancellation is among frogs.