Giant pandas have the perfect camouflage for their natural habitat • Earth.com 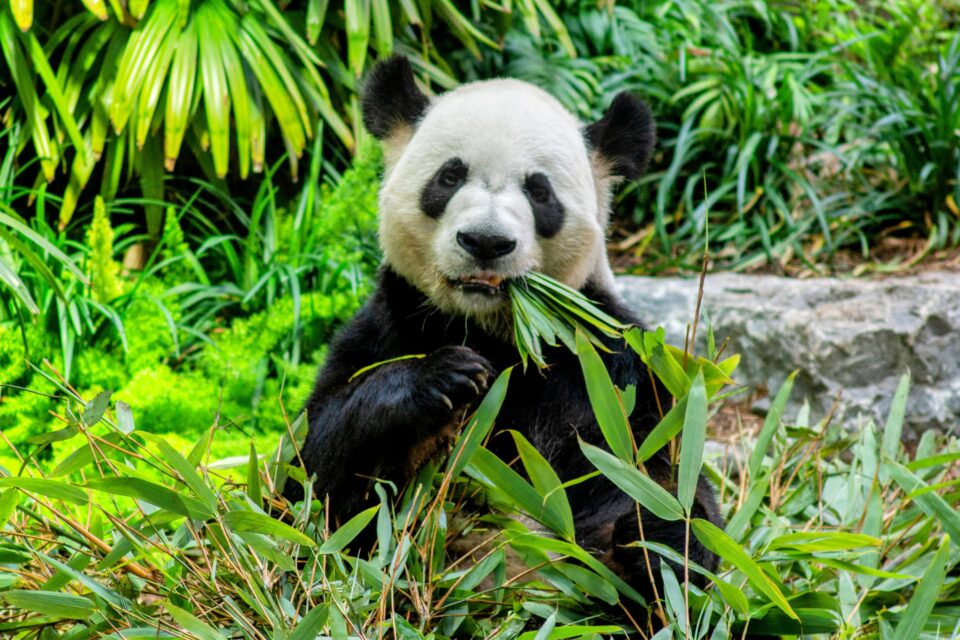 Giant pandas have the perfect camouflage for their natural habitat

We might think that the bold, black-and-white coloration of giant pandas makes them highly conspicuous to humans and predators alike. But we would be wrong.

A new study led by the University of Bristol demonstrates that the unique pattern of black and white fur coloration works to disguise giant pandas in their natural environment. For their investigation, the researchers made use of state-of-the art image analysis techniques.

“I knew we were on to something when our Chinese colleagues sent us photographs from the wild and I couldn’t see the giant panda in the picture,” explained Professor Tim Caro. “If I couldn’t see it with my good primate eyes, that meant that would-be carnivorous predators with their poorer eyesight might not be able to see it either. It was simply a matter of demonstrating this objectively.”

Initially, the international team of experts analyzed the rare photographs of giant pandas in their natural environment. They found that the black patches of fur blended in with dark shadows and tree trunks, while the white patches matched foliage and snow. Also, the rare brown fur that some pandas exhibit matched ground colors and bridged the gap between the dark and light elements in the visual environment.

The results are consistent whether viewed by humans, or by felid or canid vision models (which both represent potential predators of pandas).

Next, the researchers assessed whether giant pandas show disruptive coloration. This is a form of camouflage in which high-contrast patterns break up the outline of an animal’s body or obscure easily recognizable internal features, such as the eyes or mouth.

The experts found that the large black and white patches of fur do indeed make it more difficult to identify the various parts of a panda’s body as being joined together. This defensive color pattern means that the black legs and ears do not look as though they are part of the panda’s white body, especially when it is viewed from some distance.

Lastly, the researchers utilized a novel color map technique to compare a similarity-to-background metric across a variety of species, including the giant panda. This comparative analysis confirmed that the background resemblance of the giant panda fell solidly within the range observed for other species that are traditionally considered to be well camouflaged or cryptic.

“The rare photographic evidence allowed us to examine the giant panda appearance in its natural environment for the first time,” said study lead author Dr. Ossi Nokelainen. “With help of the state-of-the-art image analysis, we were able to treat these images as if the pandas would have been seen by their predator surrogates, using applied vision modeling techniques and also to explore their disruptive coloration. Comparative results totally bust the myth of giant pandas being overtly conspicuous in their natural habitat.”

“It seems that giant pandas appear conspicuous to us because of short viewing distances and odd backgrounds: when we see them, either in photographs or at the zoo, it is almost always from close up, and often against a backdrop that doesn’t reflect their natural habitat. From a more realistic predator’s perspective, the giant panda is actually rather well camouflaged,” explained Professor Nick Scott-Samuel.

Pandas are not alone in having bold and extreme color patterns rather than the drab browns and earthy tones present in the mammals usually considered to be well camouflaged. Zebras, skunks, badgers and orcas all have striking black and white patterning on their bodies, something that has intrigued and challenged scientists for decades.

The results of the study are published in the journal Scientific Reports.