How gynandromorphs manage to be half male and half female • Earth.com 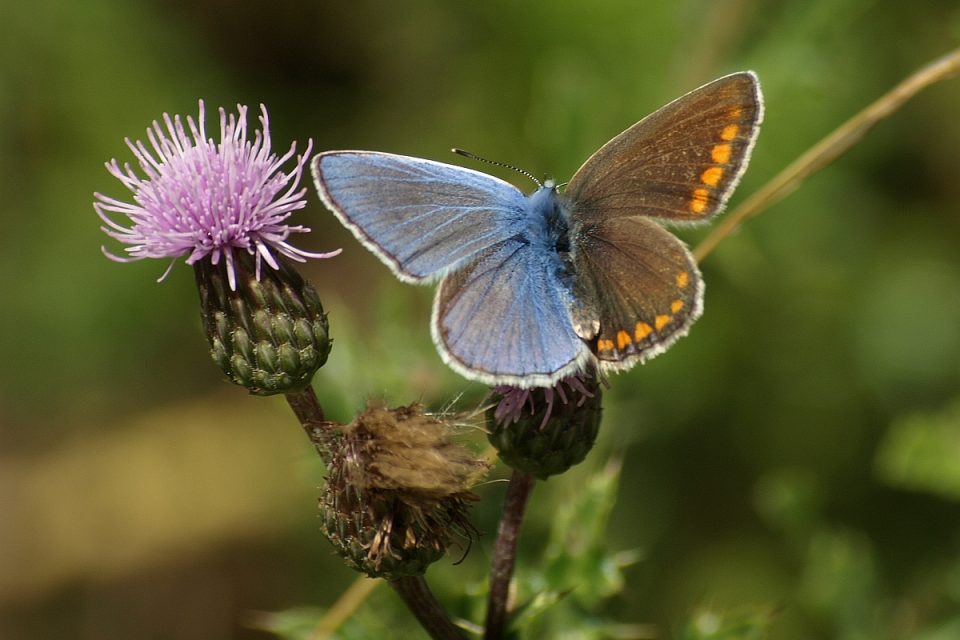 How gynandromorphs manage to be half male and half female

Male and female animals are often—but not always—dimorphic. They exhibit characteristics that reflect the sex roles of their species. In some animals, this means that the males display flamboyant ornamentation demonstrating their fitness and thus the desirability of their genes to females. This is particularly apparent in birds…think of peacocks and other pheasants.

In others, particularly social animals, males are larger, a function of their roles as the leaders and defenders of their groups. Think of silverback gorillas. Sometimes, visual differentiation of the sexes is more subtle…think of the hundreds of species of sparrows and finches, whose sexes are distinguished by variations on a theme of brown and white streaks and patches. It takes at least some knowledge of these markings to tell the sexes apart in such cases—thus the joking dismissal of them as “little brown jobs” by stymied birders.

These differences, discernible to human eyes or not, reflect the evolutionary reality of the animal kingdom. Animals are a sexually binary group. That is, they have evolved to reproduce through the fusion of two gametes, each produced by a separate sex. This process of genetic recombination has proven to be an enormously successful strategy —allowing the fittest individuals to merge their genes and confer their benefits to the next generation. And its significance is reflected in the morphology and habits of the entire animal kingdom. Sex is advertised visually, behaviorally, and pheromonally. Its importance is evident in nearly every animal in existence. Every so often, though, genetic accidents occur and the distinction between the clearly defined sexes is blurred.

Among the most striking of these accidents results in gynandromorphism. This term refers broadly to the incidence of organisms that contain both male and female tissues. The word “gynandromorph” derives from the Greek words for female and male (gyne and andro) and shape (morph). A number of recent news stories have highlighted northern cardinals (Cardinalis cardinalis) that, to the delight of backyard bird watchers, appear to be half male and half female. One half of the body displays the brilliant crimson plumage that is the trademark of the male and the other the muted dun of the female. It is as if one half of a female were dipped in red paint…or, if you prefer, one half of a male had been bleached. These birds are sometimes referred to as “half-siders”—they are bilateral gynandromorphs, literally half male and half female. Though genetic tests would be required to confirm that these birds were actually gynandromorphs, it is quite likely. There are no other known genetic phenomena that would explain the split coloration.

Gynandromorphism has also been observed in captive zebra finches (Taeniopygia guttata), passeriform birds distantly related to cardinals. The differences in coloration between female and male zebra finches are more subtle than those in cardinals: females lack the cheek patches and spotted flanks seen in males. Still, gynandromorphic specimens are easily distinguishable and can be isolated for examination. In a fascinating study of gynandromorphic zebra finches, it was determined that, unlike mammals, sex in birds is exhibited in a “cell-autonomous fashion.” That is, hormones are not necessarily the primary drivers of sex-specific physiology and behaviors. The cells themselves are either male or female.

The research found that a half-male, half-female zebra finch still sang like a male. Analysis of brain tissue found that one half of its brain was composed almost entirely of male cells and the other of female cells—indicating that perhaps male cells dominated behavior or that hormones secondarily mediated sex-specific behaviors. While the introduction of male hormones did induce fully female birds to sing in a more masculine fashion, it did not totally erase female characteristics. Blocking male hormones in fully male birds, though, did not prevent them from singing—a sex-specific behavior intended to attract mates. This suggests that the cells themselves have a fundamental role to play in determining sex-specific behaviors.

A 2010 study on gynandromorphic chickens broadly corroborated these findings. Interestingly, when male cells were transplanted into female tissue and vice versa, they retained their sexual identity, thus giving credence to the idea that sex is determined on a cellular level in birds. An earlier study (1923) of a gynandromorphic chicken found that each side of its body exhibited characteristics typical of one sex or the other, including larger bone structure on the male side, as well as the presence of a testis-like gonad on the male side and an ovary-like gonad on the female side. Though the bird in that study did produce eggs, it did not mate with males and so it was unknown whether it was fertile.

The 2010 study, which focused on three specimens, found that one had a more ovary-like gonad, one had a testis-like gonad, and one had a gonad that had characteristics of both. The gynandromorphic zebra finches did mate but proved sterile, suggesting that in all likelihood gynandromorphs cannot reproduce. There is a slim possibility that an avian gynandromorph with an ovary on its left side might be able to produce viable young—female birds have only one functional ovary and it is on the left side of the body.

The organization of bird sex chromosomes is the reverse of that in mammals. Whereas male mammals have XY sex chromosomes, and females, XX, in birds, males have ZZ sex chromosomes and females have ZW chromosomes. So: males are the homogametic sex in birds whereas females are the homogametic sex in mammals. It is thought that in birds gynandromorphs occur when the female’s gamete fails to shed its W chromosome in what is known as the polar body. Usually, this extra DNA is discarded and not fertilized by the DNA contained in the male gamete. However, sometimes, for unknown reasons, it is retained and thus provides a site for fertilization by an additional sperm within the same egg.

The proper nucleus and the polar body are both fertilized and the resulting embryo then develops with both male and female genetic information. Because this happens at such an early stage, when the zygote divides, it maintains the sex division of the two sets of recombined DNA. The sex that each indicates is thus expressed along bilateral lines—half and half. Occasionally, cells of the opposite sex do migrate across the lateral boundary but each side is either predominantly male or female. This is essentially a form of chimerism—the blending of two separate genomes. Essentially, twins develop within the same egg and ultimately coexist in one body.

This chromosomal organization is mirrored in lepidopterans—butterflies and moths—in which some of the most astonishing cases of gynandromorphism have been discovered. Sexual dimorphism manifests in the wing coloration and even shape of these insects. So, in cases of gynandromorphs, the wings will exhibit the coloration of one sex on one side and the other sex on the other. This may occur on smaller portions of the body if a sex chromosome is lost from a cell later on in embryonic development. In bilateral gynandromorphs, this occurs at the first cell division, and so there is an even split. However, if, say, a sex chromosome is lost during the second division of the zygote, which would result in four cells, one quadrant of the body might be one sex and the other three the other sex. This is known as mosaicism. Interestingly, a study of gynandromorphic butterflies found that while their wings were usually typical of one sex or the other, their genitalia exhibited the characteristics of neither.

A rash of gynandromorphic butterflies and moths were found near the sites of the Fukushima and Chernobyl nuclear disasters, indicating that the residual radiation may increase the likelihood of these mutations.

Perhaps even more dramatic are cases of gynandromorphism in stick insects. In addition to color differences, there are significant size and morphological variations between the sexes in some species. Females are larger and green whereas males are smaller and brown. Males also have wings, whereas females do not. This is reflected in the lopsided appearance of gynandromorphic individuals: the female side is hefty and jade-colored, without a wing, while the male side is skinny and brown, with a wing. 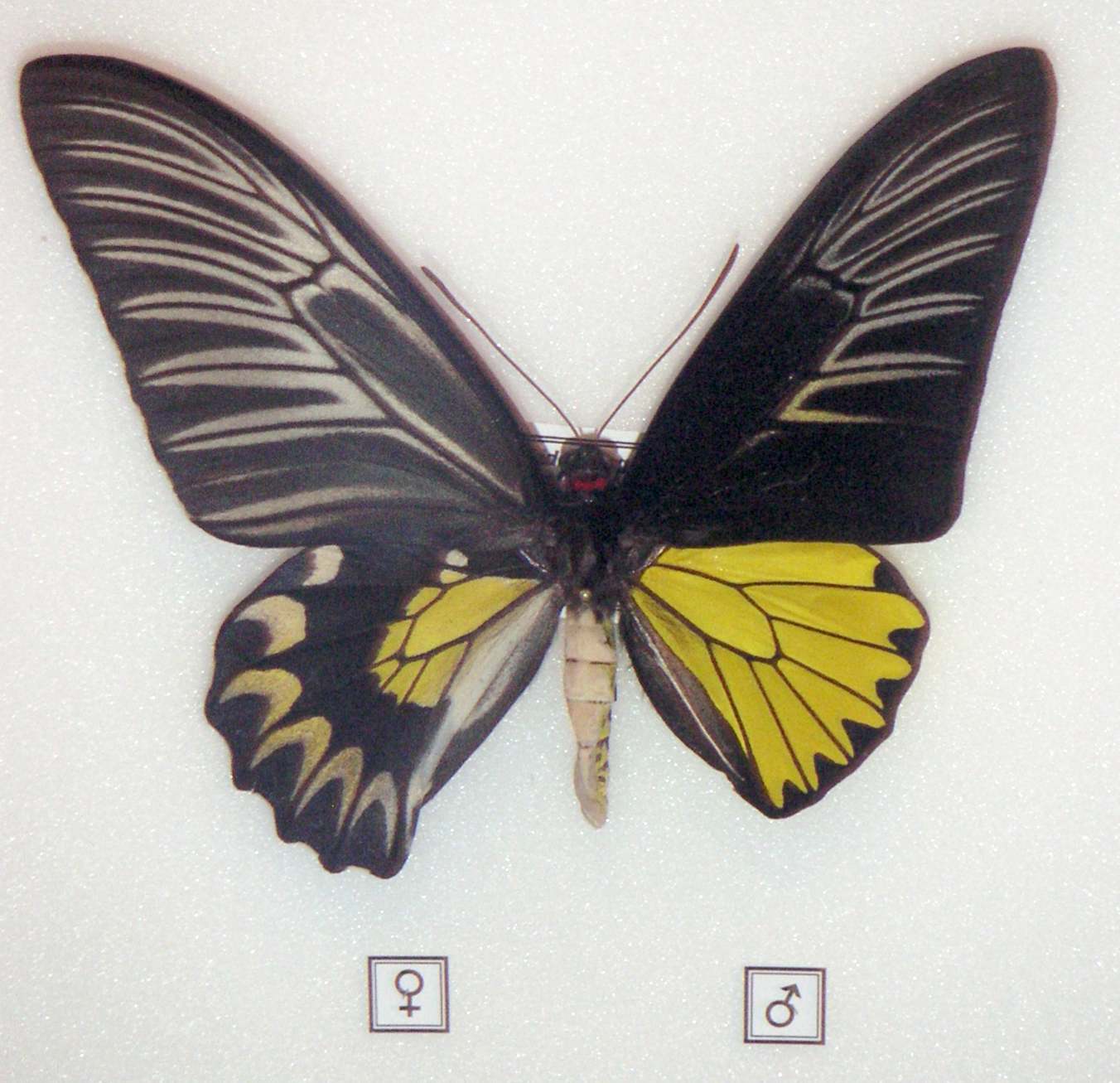 In honeybees, gynandromorphism occurs through different mechanisms. Males develop from unfertilized eggs and females develop from fertilized eggs. Often, more than one sperm fertilizes a single egg and sex determination may be scrambled as a result. Bees that result from this disordered genetic information may include components typical of queens and workers—females—and those of drones—males. Some may have as many as three fathers. One apparently normal female worker bee was discovered to have no maternal DNA at all… it had two fathers and no mother. Two of the sperm that entered its egg fused and exchanged DNA, as opposed to the sperm and egg exchanging DNA. It has been speculated that these unique means of genetic recombination may have led to the development of different worker castes in another group of hymenopterans, ants, which, unlike bees, sometimes have different types of workers that specialized in certain tasks.

It is perhaps unsurprising that one of the more intriguing and well-studied incidences of gynandromorphism occurs in the fruit flies, those workhorses of the genetic lab. Unlike insects such as lepidopterans, the arrangement of their sex chromosomes mirrors that of mammals: females have XX chromosomes and males have XY chromosomes. Incidences of gynandromorphism in these flies were among those first described in the early 20th century. Because certain other phenotypic characteristics are tied to sex chromosomes, gynandromorphic fruit flies are easily spotted. So, if the genes for a white eye are carried by an X chromosome and that chromosome is retained while the chromosome for a red eye, otherwise dominant, is lost, that side of the body will be male and have a white eye. Mosaicism is frequent as well: smaller portions of an individual fly may be a different sex than the rest of it. This has allowed for elegant experiments that demonstrate the traits carried by these chromosomes. For example, if the head of a gynandromorphic fruit flies is genetically male, it will demonstrate male mating behavior. If it isn’t it will demonstrate female mating behavior.

While humans cannot be gynandromorphs due to the hormonal mediation of our sex, our fascination with them is evident in the pantheons of world religion—the Hindu deity Ardhanarishvara, for example, is male on one side and female on the other. And our examination of the phenomenon has had direct implications on human genetic research: cancers may be inherited on one side of the body or the other. Thus, the existence of a few strange and beautiful half-siders may illuminate the obscure genetic mechanisms that drive us all.