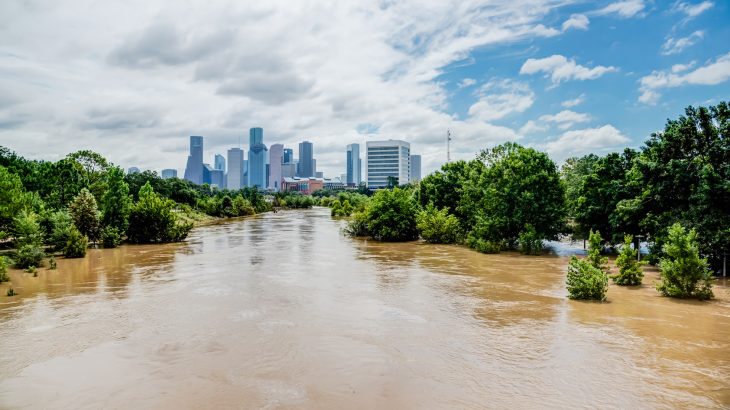 Houston’s urban buildup directly contributed to the massive damage caused by category 4 Hurricane Harvey in August 2017, according to new research from Princeton and University of Iowa. New data shows that Houston’s risk for extreme flooding, which caused $125 billion in damage and killed 68 citizens, was 21 times greater due to the city’s urbanization.

By way of computer models, researchers found that Hurricane Harvey was able to drop more rainfall (between 40 and 60 inches over four days) and cause massive flooding at a faster pace thanks to Houston’s urban buildup, thus showing that humans can have a direct impact in weather severity on top of climate change.

Furthermore, the study shows that future urban and suburban development planning must consider hurricane risk and recovery. Co-author of the study and Princeton professor of geosciences and the Princeton Environmental Institute (PEI), Gabriel Vecchi, said, “Our focus on the role of urbanization was aimed at providing a fuller perspective of human activities on Harvey’s rainfall and flooding. Humans have influenced both climate, through greenhouse gas emissions, and the local environment around Houston through urbanization in ways that we thought could have affected rainfall and flooding from Harvey.”

As Houston expanded and more streets and sidewalks were built, there was less groundspace for rain to be absorbed.

Lead author Wei Zhang, an assistant research scientist at Iowa’s IIHR — Hydroscience and Engineering research center, stated, “Given that hurricane winds and rainfall are projected to intensify in the future, and that urbanization along our coasts is also expected to continue to increase, our work highlights the need to understand the risks and to implement appropriate flood-mitigation strategies.”

Through their computer modelling, researchers also found that non-urban areas receive less rainfall during hurricanes than urban areas. They attribute this to “surface roughness,” the effect that happens when winds strike tall buildings, creating friction. This friction creates warm surface air, which rises up into the atmosphere, thus causing more clouds and precipitation.

The study aims to educate city planners and government about the potential weather and climate risks associated with urbanization. If they don’t take these factors into consideration, coastal cities and cities without proper drainage could suffer severe consequences.