How can pythons eat prey as large as a deer? • Earth.com 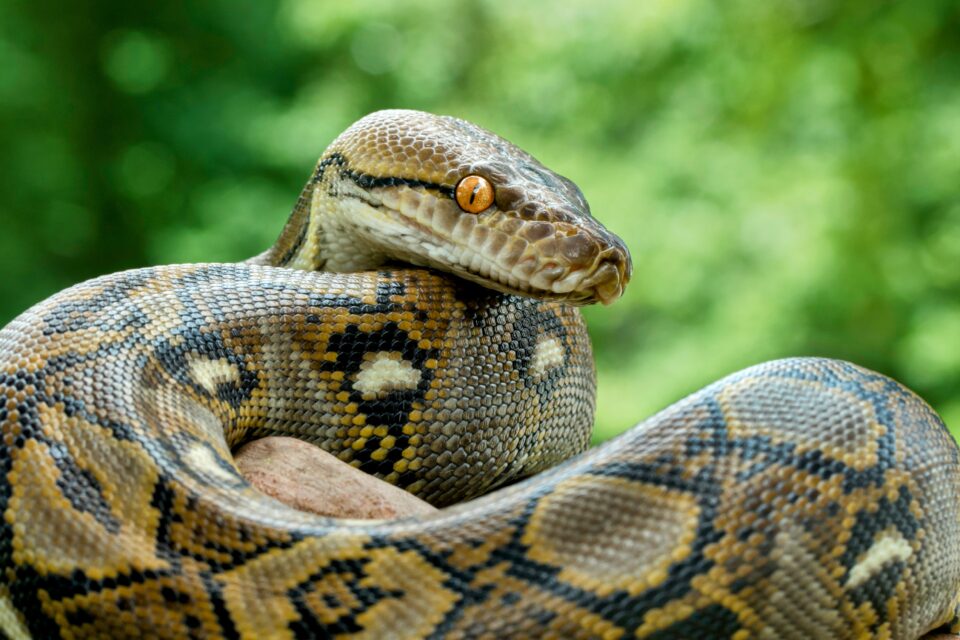 How can pythons eat prey as large as a deer?

Burmese pythons are not only huge snakes – reaching over 18 feet in length and 200 pounds in weight – but also voracious eaters, often feeding on prey as large as a deer. Now, a team of biologists from the University of Cincinnati (UC) has found that it’s not only the size of the head and the body that make pythons able to consume such large animals; they also evolved highly stretchy skin between their lower jaws which allows them to feed on prey up to six times larger than similar-sized snakes.

Since most snakes swallow they prey whole, they must have extremely wide mouths to accommodate such meals. Unlike humans’ lower jawbones, those of snakes are not connected, allowing them to open wide.

“The stretchy skin between left and right lower jaws is radically different in pythons. Just over 40 percent of their total gape area on average is from stretchy skin,” said study lead author Bruce Jayne, a professor of Biology at UC. “Even after you correct for their large heads, their gape is enormous.”

Pythons are constrictors, meaning that they bite their prey and wrap their powerful coils around it, cutting off its vital blood flow before consuming it whole – and the larger the prey, the more energy snakes derive from a single meal. Due to this, pythons do not need to hunt that often, which can carry high risks in a world replete with other dangerous predators and busy roads.

Since small snakes derive greater benefits in relative mass prey from just a modest increase in gape size, python babies have an early advantage from being able to consume a broader range of prey compared to other snakes of similar size.

Moreover, being big also helps snakes avoid being eaten themselves by predators ranging from wading birds, minks, and raccoons to alligators and other snakes. “Once those pythons get to a reasonable size, it’s pretty much just alligators that can eat them,” Professor Jayne said. “And pythons eat alligators.”

Currently, Burmese pythons are wreaking havoc on the ecology of Everglades National Park where they were introduced due to the release of captive animals from the exotic pet trade in the 1980s.

“The Everglades ecosystem is changing in real time based on one species, the Burmese python,” said study co-author Ian Bartoszek, an environmental science project manager for the Conservancy of Southwest Florida.

Fortunately, they rarely attack people. According to Bartoszek, the only defensive encounters he has had with wild pythons were with females guarding their nests. “It’s way more dangerous to drive there than to work with the snakes,” he concluded.

The study is published in the journal Integrative Organismal Biology.