How do lianas impact forests around the world? • Earth.com 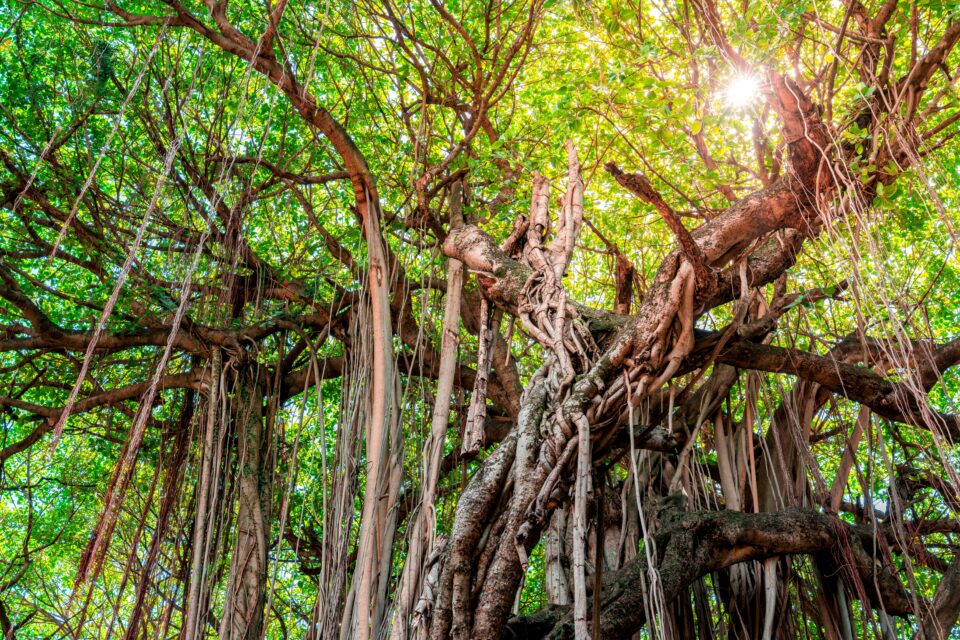 How do lianas impact forests around the world?

Lianas are long-stemmed, woody vines that have their roots in the ground but use the trunks and branches of trees to climb their way up towards the canopy in order to reach sunlight. The term “liana” applies more to this type of lifestyle than to any specific family of plants, as lianas come from a variety of different taxonomic groups. They are found in tropical forests all over the world.

Research on lianas, mostly in Neotropical forests (South and Central America, Caribbean), shows that they are increasing in abundance, diversity and biomass. This is not good news for the forest trees, as the vines compete with trees for nutrients, water and sunlight. Forest trees infested with lianas tend to produce less fruit, to grow more slowly and ultimately to remain smaller. Lianas can even increase the mortality rate of forest trees. This means that their presence has a negative impact on a forest’s ability to take up carbon from the atmosphere and store it in living biomass.

New research, led by scientists from the University of Nottingham, U.K., is the first to investigate the distribution and abundance of lianas in a Paleotropical forest canopy in Southeast Asia. These forests support a high density of large trees with a significantly greater above-ground biomass than in Neotropical forests such as the Amazon. This makes Paleotropical forests very important in terms of carbon storage, and the role of lianas in restricting this ecosystem service could prove critical as we attempt to limit the level of carbon emissions globally.

In this research, published in the Journal of Ecology, scientists assessed the distribution of lianas in 50 hectares of Paleotropical forest canopy in Danum Valley, Sabah, Malaysia. They used a drone to capture high-resolution imagery of the canopy and were able, thereby, to produce accurate data on tree-level liana load rather than being restricted to surveying the numbers and diameters of liana stems at ground level.

Data on other variables was also collected using the drone, and a laser scanner that created 3D models of the area, as well as ground-based surveys. This data included the topography of the land, soil characteristics, tree height and crown area, and the distance to the nearest canopy gap and nearest neighboring tree containing lianas. With this data the researchers hoped to understand where lianas like to grow in the forest, and why.

Dr. Catherine Waite led the study while at the University of Nottingham, before moving to the University of the Sunshine Coast, Australia. “Tropical forests are an incredibly important – and natural – system for carbon capture and storage, helping to mitigate climate change. Lianas clearly threaten forests’ abilities to do this and so it’s key that we understand the spread and characteristics of lianas to determine what may drive their increase in the future,” said Dr. Waite.

The results showed that, of the 2,428 tree crowns (≥25 m2 in area) found across the 50-ha plot, 1,243 trees (51.2 percent) were infested by lianas. The infested trees were not randomly distributed, but tended to be aggregated together. Furthermore, tree height was by far the strongest predictor of liana load, with taller trees being less likely to contain lianas, and also less likely to contain a large load of lianas. This finding was contrary to what has been identified in Neotropical forests, where lianas tend to favor the largest trees.

The analysis also showed that trees growing near to gaps in the canopy, or to other trees with lianas, were also more likely to be infested with lianas. Canopy gaps indicate sites of previous disturbance to the forest, such as tree falls, where sunlight penetration is enhanced. The researchers suggest that lianas growing near canopy gaps may even hinder the growth of trees in the area, thus keeping the gap open and allowing better access to sunlight for the lianas.

“In this study, we found taller trees were less often and less heavily infested by lianas than shorter trees, which is opposite to well-established Neotropical findings,” said Dr. Waite. “This suggests a fundamental difference between Neotropical and Southeast Asian forests. Considering that most liana studies have focused on the Neotropics, this highlights the need for additional studies in other Paleotropical regions to clarify potential differences and enable us to better understand liana impacts on tropical forest ecology, carbon capture and storage, and ultimately, on climate change.”

“Neotropical studies have shown that presence of lianas in tropical forests has broad and important ramifications for the global carbon cycle and therefore for the ability of tropical forests to mitigate climate change,” said study co-author Dr. Geertje van der Heijden. “Knowing more about which trees they infest therefore helps making better predictions on their impact on tropical forests globally.”

An understanding of what drives liana growth and distribution in tropical forests may prove particularly pertinent as lianas may continue to proliferate with future climate change. Due to their negative impact on carbon absorption and above-ground carbon stocks, lianas may alter tropical forest functioning in future, with serious implications for tropical forest carbon storage.