How will salmon survive under climate change? • Earth.com 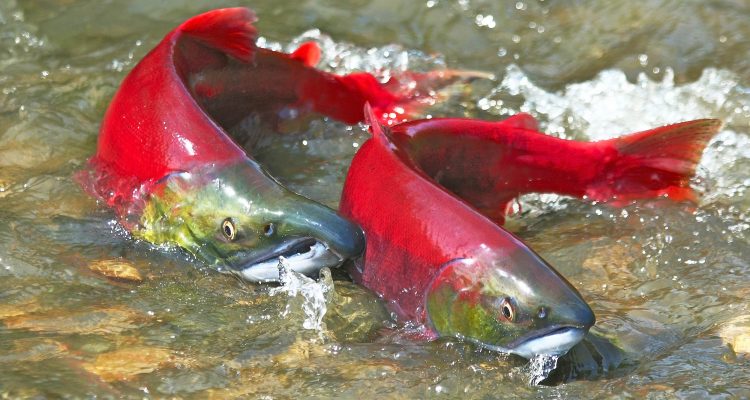 How will salmon survive under climate change?

As torrential rain descends on the Pacific Northwest, new research published online in the journal Global Change Biology provides a glimpse of how salmon rivers might fare in a future with larger floods.

The study, led by Wild Salmon Center science director Dr. Matthew Sloat, in collaboration with US Forest Service researchers, examines new climate patterns in southeast Alaska and the effects on flooding and habitat in salmon watersheds. Climate projections for southeast Alaska suggest that the region, home to the largest remaining temperate rain forest in the world, will be even warmer and wetter in the future.

Salmon are absolutely central to the culture, economy, and ecosystems of southeast Alaska. Salmon fishing in the region generates about $1 billion annually. Salmon populations and their habitat are generally in good condition throughout the region, but local communities are concerned about the potential effect of a changing climate on these populations.

Sloat and colleagues looked at the impact future floods could have on salmon spawning. Salmon spawn in streams in the fall and eggs develop through the winter, so increased winter flooding could potentially scour their eggs from the streambed and impact the next generation of fish.

The researchers combined field measurements and model simulations to estimate the potential influence of future flood disturbance on the quality and extent of coho, chum, and pink salmon spawning habitat in over 800 southeast Alaska watersheds.

They found that as much as 16% of the spawning habitat for coho salmon could be lost by the 2080s. But losses were predicted to occur primarily in narrower, steeper streams that provide moderate-quality habitat and, to a lesser extent, in high quality low gradient floodplain habitats. Estimated effects were lower for pink and chum salmon, which spawn almost exclusively in low gradient floodplain streams.

Somewhat surprisingly, the study shows that the overall risk of flood impacts to salmon reproduction in southeast Alaska is probably much lower than was previously thought.

According to Sloat, one key factor in this finding is the relatively pristine condition of the area’s rivers and floodplains. Intact floodplains can minimize future impacts to salmon populations because floodplains allow large floods to spread out over valley bottoms. Previous assessments had not accounted for valley and stream channel morphology when considering potential effects of floods.

“Flood plains essentially act as pressure release valves that can dissipate the energy of large floods,” says Sloat. “In fact, most salmon prefer to spawn in stretches of river with intact floodplains, which is probably no coincidence because these features of the landscape help protect salmon eggs from flood events.”

Sloat says that a clear message from this research project is that maintaining or reconnecting rivers and their floodplains may be critical for increasing the resilience of salmon in the face of a changing climate.

“Our results identify key parts of watersheds that, if protected, will continue to buffer salmon populations from flood disturbance in the future,” he says.

The relationships between floodplains, climate change, and salmon habitat are applicable in other regions as well.

“We have been addressing this issue in southeast Alaska but the same tools can be used in the lower 48 and elsewhere,” he says. “The real take-home message from this work is that protecting intact rivers, especially areas with functioning floodplains, is one of the key elements for sustaining salmon in the future.”