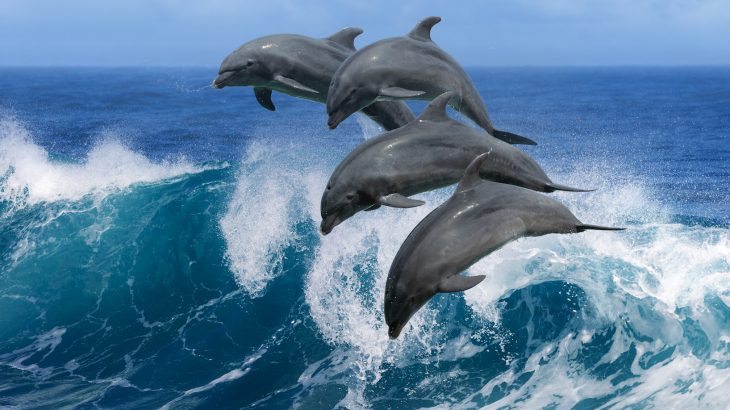 The plastics and chemicals that we use on land often find their way into the ocean, most notably in the Pacific garbage patch, which is an island of garbage the size of Texas floating in the middle of the Pacific Ocean. This plastic garbage can get tangled up with and ingested by marine life, causing harm to the species that get entrapped by our trash. Additionally, chemicals that are commonly used by humans can be harmful to animals as well.

Now, scientists have found that the chemical compounds used in a variety of household products – from cleaning supplies to cosmetics – have been discovered in the bodies of wild marine mammals.

Scientists report that they have found the presence of phthalates in dolphins’ urine for the first time, which indicates that these chemicals are staying in the body long enough to be metabolized. Phthalates are known to be endocrine disruptors, which have been linked to hormonal and reproductive issues in humans. Known side effects include low sperm count and abnormal development of reproductive organs. But as of right now, it isn’t known how the presence of phthalates will affect dolphins.

The study that helped researchers determine all of this involved collecting urine samples from dolphins in Sarasota Bay, Florida between 2016 and 2017. Past research had shown the presence of phthalate metabolites in dolphins’ blubber and skin – but these new findings are more concerning.

Analysis of urine samples from 17 wild dolphins revealed phthalate metabolites in 17 percent of the dolphins assessed, with researchers testing for nine specific phthalates.

“We focused on urine in dolphins because, in previous studies of humans, that has been the most reliable matrix to indicate short-term exposure,” says Leslie Hart, a professor of public health at the College of Charleston.

Despite this discovery, it’s still not known what the source of these phthalate levels could be. However, the researchers do point to plastic waste as the likely cause, since high concentrations of a specific compound commonly added to plastics for durability and lubrication was found in the dolphins’ urine.

“These chemicals can enter marine waters from urban runoff and agricultural or industrial emissions, but we also know that there is a lot of plastic pollution in the environment,” Hart explains.

Unfortunately for the other marine life that lives in Sarasota Bay, these chemicals being found in dolphins likely means that other species have been exposed as well. It’s clear that what we do on land has impacts that are hard to see once they reach the ocean, but they’re present, and they likely have significant consequences.