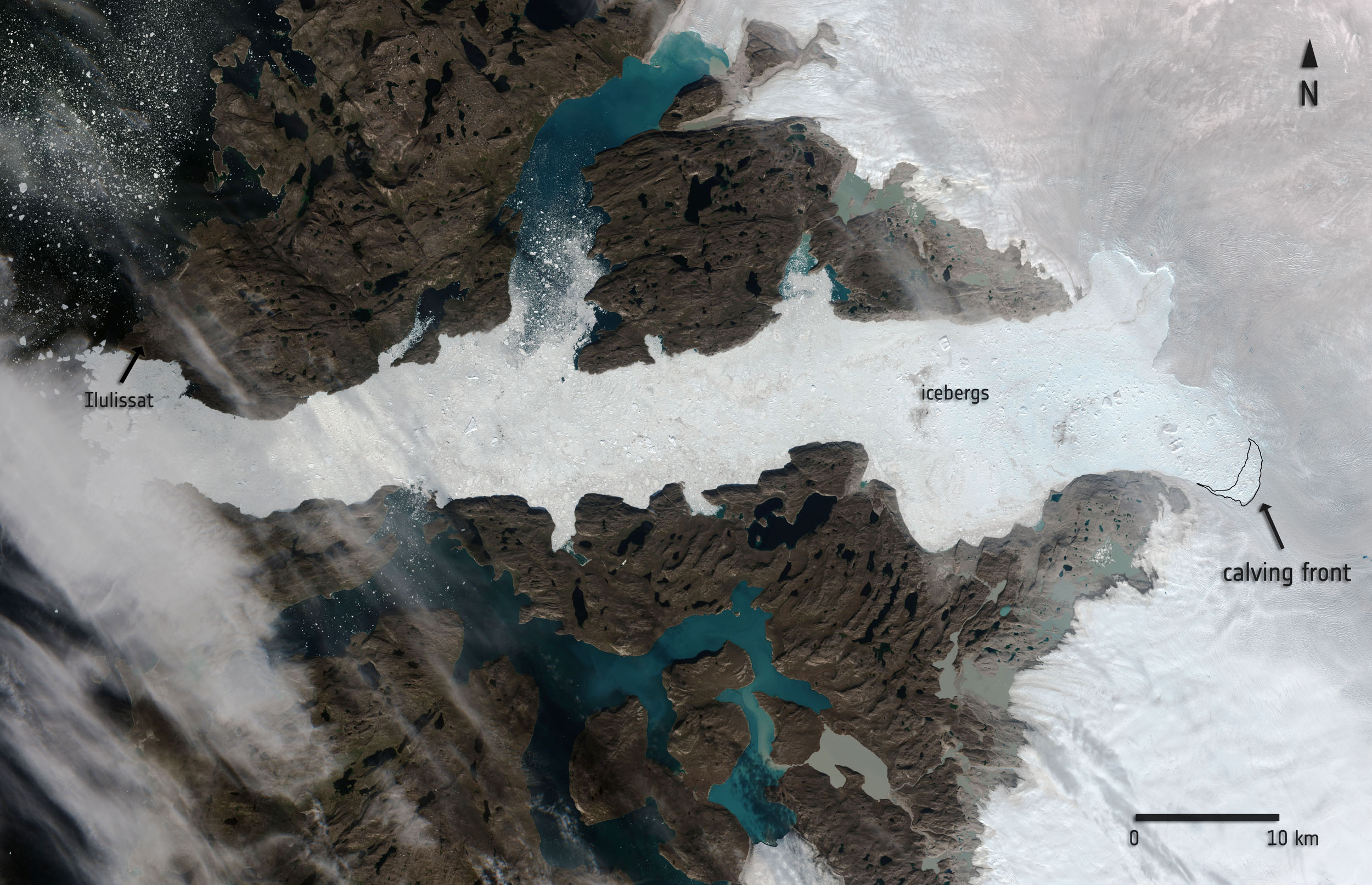 Satellite images show that the fastest moving glacier in the world shed a chunk of ice measuring around 12.5 sq km this week – one of the most significant calving events on record.

Radar images from Sentinel-1A captured the Jakobshavn glacier in western Greenland before and after the event, which took place between 14 and 16 August.

Comparing images taken on 27 July, and 13 and 19 August, the new face of the glacier has been pushed inland by several kilometres to what appears to be its furthest easterly location since monitoring began in the mid-1880s.

The image time series suggests that between 27 July and 13 August, the glacier advanced westward before the calving caused rapid retreat of the ice front to its position on 19 August.

It is estimated that the glacier lost a total area of 12.5 sq km. Assuming the ice is about 1400 m deep, this equates a volume of 17.5 cubic km – which could cover the whole of Manhattan Island by a layer of ice about 300 m thick.

The history of this last calving event is also revealed in images taken by Sentinel-2A on 6 and 16 August.

Jakobshavn glacier drains 6.5% of the Greenland ice sheet, producing around 10% its icebergs. This amounts to some 35 billion tonnes of ice that calve every year.

Other similar events have been documented where the glacier parted with 7 sq km of ice, both earlier this year and back in 2010.

Icebergs are often so large that they cannot float away easily. They remain, sometimes for years, stuck on the bottom in shallower areas of the fjord until they finally melt enough to disperse, break into pieces or are pushed out by icebergs coming up from behind.

Studied for over 250 years, the Jakobshavn glacier has helped to develop our understanding of the importance of ice streams and glaciers in climate change, icecap glaciology, and how they affect sea level.

Sentinel-1A and Sentinel-2A are the first two satellites in orbit for Europe’s Copernicus programme. While Sentinel-1A is an all-weather, day-and-night radar imaging mission, Sentinel-2A carries a multispectral imager.

Since radar can ‘see’ through clouds and in the dark, Sentinel-1A it is particularly useful for maritime surveillance, ship safety, sea-ice charting and ice-sheet monitoring. Sentinel-2A also demonstrates here that it is also valuable for ice and climate monitoring.

Together, these and future Sentinels, in particular the upcoming Sentinel-3 mission, will add further complementary measurements for operational applications and scientific purposes.