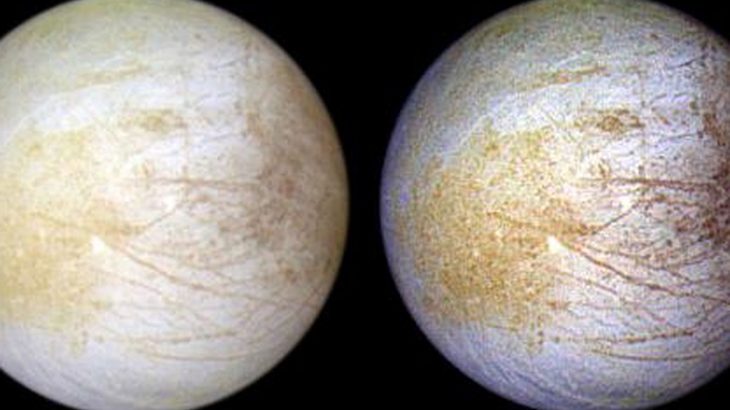 A new report from the NASA Jet Propulsion Laboratory (JPL) has revealed that the surface of Jupiter’s moon Europa contains visible amounts of sodium chloride, commonly known as table salt.

The results of a visible-light spectral analysis showed that the areas of the moon where the salt has accumulated appear yellow in color. The finding indicates that the ocean on Europa may be much more like our oceans than what was previously realized.

NASA’s Voyager and Galileo spacecrafts have provided scientists with evidence to suggest that Europa has a layer of water frozen at its crust with a liquid ocean under the ice. Galileo’s infrared spectrometer identified ice and a substance that was possibly magnesium sulfate salts. Scientists speculated that any salt on the icy surface originated from the ocean underneath.

Study co-author Mike Brown is a professor of Planetary Astronomy at Caltech. “People have traditionally assumed that all of the interesting spectroscopy is in the infrared on planetary surfaces, because that’s where most of the molecules that scientists are looking for have their fundamental features,” said Professor Brown.

“No one has taken visible-wavelength spectra of Europa before that had this sort of spatial and spectral resolution. The Galileo spacecraft didn’t have a visible spectrometer. It just had a near-infrared spectrometer, and in the near-infrared, chlorides are featureless,” added study lead author and Caltech graduate student Samantha Trumbo.

High-quality spectral resolution data from the W. M. Keck Observatory in Hawaii led the scientists to reevaluate what they were seeing on Europa. “We thought that we might be seeing sodium chlorides, but they are essentially featureless in an infrared spectrum,” said Professor Brown.

Kevin Hand, a scientist at NASA’s JPL, bombarded sample ocean salts with radiation to mimic the conditions on Europa. This lab experiment uncovered several distinct features which appeared in sodium chloride after irradiation. Sodium chloride turned a shade of yellow similar to what is visible in a geologically young area of Europa called Tara Regio.

“Sodium chloride is a bit like invisible ink on Europa’s surface. Before irradiation you can’t tell it’s there, but after irradiation the color jumps right out at you,” explained Hand.