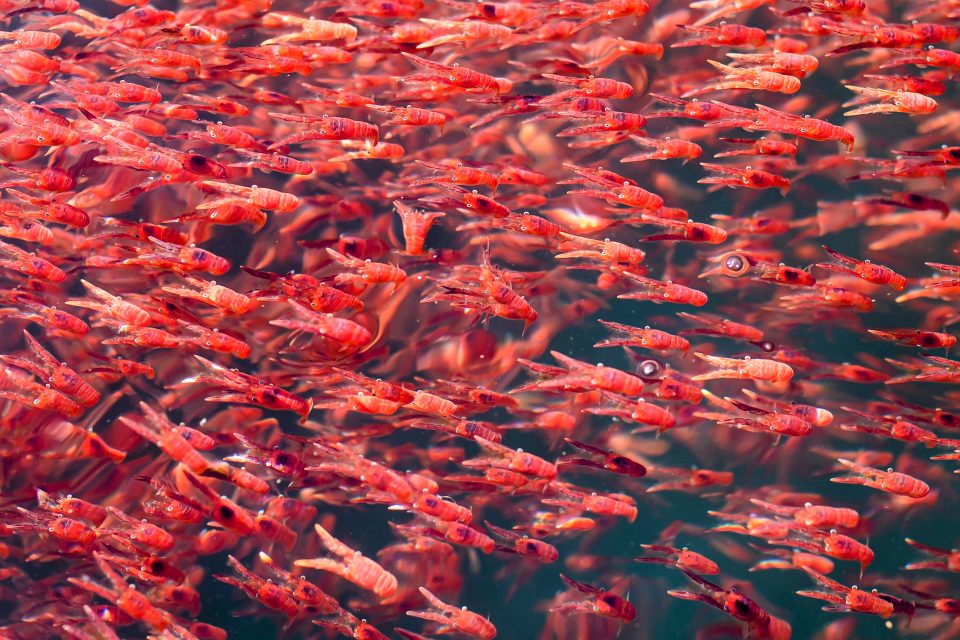 Krill populations in the Southern Ocean are projected to decline by about 30 percent this century, according to a new study from CU Boulder. While the projected krill losses are tied to anthropogenic global warming, this will not be obvious right away.

The experts report that the human-driven effects on Antarctic krill habitat will be indistinguishable from natural climate variability for decades to come.

The research has important implications for the local food web, and also for the largest commercial fishery in the Southern Ocean that supports a $2 billion fish oil industry.

Krill are small shrimplike crustaceans that play a huge role in the aquatic food chain. In the Southern Ocean, krill serve as the primary source of nutrients and energy for most of the marine predators, including penguins, seals, and whales.

“Krill are what links the ecosystem together,” said study lead author Zephyr Sylvester. “They’re really important to the Southern Ocean for pretty much every predator species.”

Human-induced climate change is not the only factor that is altering the Antarctic krill habitat. Natural variability is also driving major changes.

“Climate change is rapidly altering the habitat of Antarctic krill, a key species of the Southern Ocean food web. Krill are a critical element of Southern Ocean ecosystems as well as biogeochemical cycles, while also supporting an international commercial fishery,” wrote the study authors.

“In addition to trends forced by global-scale, human-driven warming, the Southern Ocean is highly dynamic, displaying large fluctuations in surface climate on interannual to decadal timescales.”

In order to predict population numbers and plan harvest limits, experts must separate the trends associated with human-driven warming from those arising naturally in krill habitat.

“The thing that we really have to understand is: Is there enough krill to feed everything that needs to eat it in the Southern Ocean, as well as humans?” said study co-author Professor Cassandra Brooks. “My hope is that we can take this as a first step to understanding how to manage krill better.”

Despite being one of the most abundant species on Earth, krill can only survive in a limited temperature range and are extremely sensitive to changes in their environment.

Fishing in the Southern Ocean is currently managed by the Convention on the Conservation of Antarctic Marine Living Resources (CCAMLR), an international body established as part of the Antarctic Treaty System.

Four decades after CCAMLR was founded, however, catch limits on krill are still based on a stock assessment that does not account for natural environmental variability or climate change impacts.

While there is widespread recognition of the importance of understanding the impacts of climate change on this marine ecosystem, knowing how the climate naturally varies is an important prerequisite, explained Sylvester.

To investigate, the researchers ran a larger group of models many times, known as a large ensemble Earth system model. It is the first time this approach has been used for the Southern Ocean or for krill.

“Then we were able to look at the different trends and quantify how much the natural variability was masking the signal for climate change,” said Sylvester.

The study is the first of its kind to use climate models to demonstrate that natural climate variability can obscure human-driven trends.

By being able to quantify how much change is likely to occur from natural variability, and separately from climate change, it allows everyone involved to plan better for the future and sustain krill for those who depend on it, said Professor Brooks.

“Even if we won’t see this really strong signal from climate change until later, what’s important for us to understand is that the Southern Ocean is a very dynamic system and we absolutely have to be managing for natural variability,” explained Professor Brooks. “And we should be ready to manage the broader impacts of climate change.”