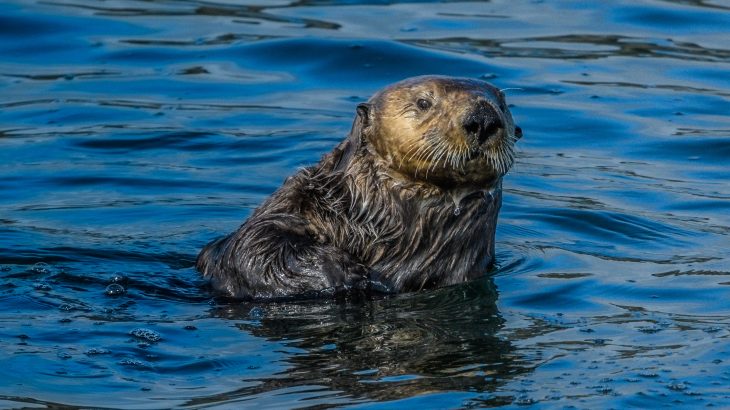 The absence of sea otters is accelerating the impacts of climate change on Alaskan reefs, according to a new study from the Bigelow Laboratory for Ocean Sciences. Explosive numbers of sea urchins are devastating Alaskan kelp forests along with the reefs that have supported them for centuries.

After the Aleutian sea otter became functionally extinct in the 1990’s, the local sea urchins have run rampant with no natural predators in this region of the North Pacific.

The researchers discovered that these sea urchins, who have already leveled dense kelp forests, are now busy grinding down coral-like reefs that are built by the red alga Clathromorphum nereostratum.

“We discovered that massive limestone reefs built by algae underpin the Aleutian Islands’ kelp forest ecosystem,” said study lead author Douglas Rasher. “However, these long-lived reefs are now disappearing before our eyes, and we’re looking at a collapse likely on the order of decades rather than centuries.”

Clathromorphum produces a limestone skeleton that gradually forms a complex reef over hundreds of years which supports many diverse marine species. Now that urchins have devoured the kelp forests, they are scraping through the reef and consuming the alga. Boring their way through the alga’s protective layer is much easier than it should be as a result of climate change.

“Ocean warming and acidification are making it difficult for calcifying organisms to produce their shells, or in this case, the alga’s protective skeleton,” said Rasher. “This critical species has now become highly vulnerable to urchin grazing – right as urchin abundance is peaking. It’s a devastating combination.”

Like tree rings, the calcified alga reef contains bands of annual growth. By examining these marks under a microscope, the researchers were able to track urchin grazing in the past. They found that this destructive activity had coincided with the past recovery and recent collapse of sea otter populations. The analysis also revealed that grazing rates have recently accelerated in correlation with rising ocean temperatures.

“It’s well documented that humans are changing Earth’s ecosystems by altering the climate and by removing large predators, but scientists rarely study those processes together,” said Rasher. “If we had only studied the effects of climate change on Clathromorphum in the laboratory, we would have arrived at very different conclusions about the vulnerability and future of this species. Our study shows that we must view climate change through an ecological lens, or we’re likely to face many surprises in the coming years.”

Despite the fact that the findings are grim, they offer important insights for addressing the growing issues associated with predator loss and climate change. For example, restoring sea otters could potentially control the urchins and allow the reef to recover.

“This is exciting because it suggests that resource managers have opportunities to manage large predators in ways that can help slow the rate with which climate change is deteriorating our natural ecosystems,” said Rasher. “In the case of Aleutian kelp forests, restoring sea otter populations would bring many ecological benefits, and would also buy us time to get our act together on curbing carbon emissions, before this foundational reef builder is lost.”