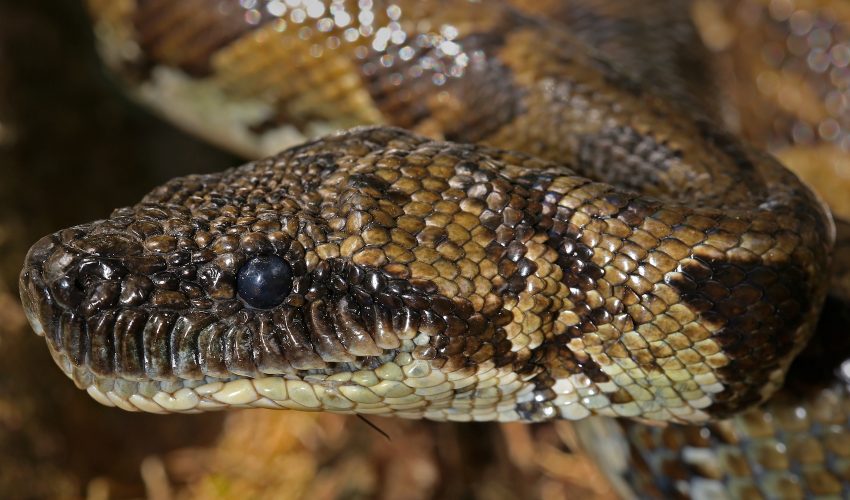 Walking along the dirt path leading up the hill to my tent site, I could hear the gentle sound of music drifting from the village below.  Then something moved in the grass and quietly crossed the path in front of me.  I moved quickly, shining my flashlight into the grass and there it was, moving stealthily away from me, for a moment I hesitated, then I reached out and grasped the strong, fluid animal.  It was a boa and I was in Madagascar.

Even in the dim light of moon and flashlight I could see the snake’s delicately beautiful pattern of browns, greys and subtle greens.  The bebelava (long animal as the Malagasy call it) writhed in my hands, turning back on me, wrapping around my arm but despite my trepidation; the boa showed no aggression at all.  There was no hissing, no biting; maybe a desire to escape but that was all.  I was filled with a mixture of instinctual fear, deep curiosity and a desire to share this wonderful animal with others.

I quickly walked down the hill, through the rows of trees in a reforestation nursery to the open aired thatch roof kitchen of the research station I was staying at.  Malagasy people have an unusual, almost superstitious fear of snakes for an island where almost no dangerous snakes live.  My reception from the locals in the kitchen was less than happy.  The cook and her assistant recoiled and everyone took a few steps away from me, only a PhD student in Botany was brave enough to handle the elegant animal and after a short time, I took her back to the hill and released her where I found her.

In Madagascar there are actually three species of boa in two genera.  First there is the Sanzinia madagascariensis or tree boa of Madagascar.  This is a mostly nocturnal snake living in the forests of Madagascar, preying on birds and mammals including perhaps the smaller or poorly prepared representatives of those cuddly lemurs.  The other two boas are in the same genus, Acrantophis dumerili and Acrantophis madagascariensis the Dumeril’s boa and the Madagascar ground boa respectively.  It is the former, The Malagasy Tree Boa that I encountered that night in Madagascar.  All of the snakes are fairly ordinary in their natural history, fairly representative of the family Boidae.  All of the snakes are large; they constrict their prey rather than using venom.  None of the snakes are dangerous in the slightest to something the size of a human.  All of Madagascar’s boas are ovoviparous and give live birth.  What is different about them is not so obvious.  What’s strange about the boas in Madagascar is their presence in Madagascar at all.

Both genera of boas found on Madagascar are in the Boinae subfamily.  There are no other snakes in this subfamily in continental Africa, none found in India or the rest of Asia.  There are no Boine boas in Europe.  The closest snakes in this subfamily are found in the rainforests of Central and South America as well as a smattering of new world islands.  Is it possible that this distribution represents a very old, and widely distributed lineage with disrupted distribution due to extinctions on the mainland of Africa?  Since the time Africa and South America split from each other have these snakes found refuge only in Madagascar and in the new world?  Did in fact South America connect to Madagascar at a time when it did not connect with Africa to create this odd distribution?  Or perhaps, is it possible that there is a mistake in taxonomy, that in fact the boas of Madagascar have a closer relative in Africa or Asia rather than South America?

The strange thing about this story is that although boas are the poster child of this odd distribution pattern, they’re not alone in it.  In the family Iguanidae, known for the ubiquitous giant lizard pet there are several subfamilies.  Virtually all iguana subfamilies are in the Americas, with the glaring exception of the Opluridae subfamily, the Malagasy Iguanas.  Then there is the third reptile with this puzzling distribution, the Podocnemididae family of turtles.  There are three genera in the family, the South American Big Headed Turtle, the South American Side-Necked Turtles and finally The Madagascar Big Headed turtles.  The questions we asked about the distribution of the boas must also be asked of the iguanas and Oplurid turtles; how did they get to Madagascar?

Imagine far back in time the nearly mythical land of Gondwana, when continents were joined in a massive land, before Madagascar became an island or South America even a continent.  Imagine those masses of wild animals fighting tooth and claw for the survival of their genes.  Imagine a lizard a turtle and most importantly for our story a snake.  South America and Africa are joined West Africa to Eastern South America at some point, that much we know.  How well the coasts of these two continents fit together was one of the first big clues for continental drift.  Madagascar seems to have been attached to India and Eastern Africa.  How did these reptiles make it from South America to Madagascar but not Africa then?  I talked to Dr. Miguel Vences, a biologist who’s worked on taxonomy and phylogeny of most amphibian and reptile groups in Madagascar to clear up the issue.

“The fact that boas exist on Madagascar has been seen as indication of an ancient link between Madagascar and South America at the time that the southern continents together formed the Gondwana supercontinent, back in the Jurassic period…”

This is where our story takes a turn though, where these different groupings of reptiles seem to show different histories, as Dr. Vinces goes on, the Boa seems more mistake than mystery.

“…However new studies indicate that the situation is more complex. It seems that Sanzinia and Acrantophis are not really boines but more closely related to Calabaria which occurs in Africa, and also seem to be younger than the ancient Gondwana land connections. So, most likely their ancestors colonized Madagascar rafting over the Ocean from Madagascar.”

I had to wonder if the same mistake was made three times with three distinct groups of reptiles, so asked Dr. Vinces about the turtles and iguanas as well.

“True, the iguanas and podocnemine turtles show this relationship, and in these cases it seems to hold true (at least for the iguanas) that it is a very ancient group that dates back to the Gondwana land connections. it is likely that other groups will show this pattern, but probably not among vertebrates. But I suspect that in some invertebrate groups we will discover similar patterns in the future.”

So it seems that our Malagasy Boas aren’t in fact boines at all and so aren’t mysteriously distributed in Madagascar and the new world while bypassing Africa.  The story turns from one of a land bridge between South America and Madagascar for boas to one of snakes migrating perhaps on driftwood, washing away from Africa and with incredible luck landing on Madagascar.  There remains the strangeness of the Iguana distribution, and maybe that of the turtles and the beauty of the snakes themselves.  There are still mysteries to be solved for the Malagasy boas.  In the genus Sanzinia where there is currently one species, scientists are wondering whether there should be two species or whether there are just two subspecies in the eastern and western parts of the country.  One of the strangest things about this story is that although these are rare, beautiful and endemic genera of snakes, little work has been done on them and much still to research. Which Dr. Vences explains,

“…it is still surprising how little is known about these emblematic animals. Besides our own studies on their distribution and genetic differentiation, almost no other studies and especially, no targeted field work have been done on these animals…  We still need basic taxonomy work, but then we also need someone to work on the ecology, natural history and life history of these snakes. Almost nothing is known on their activity, home range, or reproductive cycle in the wild.”

Two genera of snakes may not seem very important to ecology but one must consider that in Madagascar, these are the biggest snakes; where there are few predators to animals like lemurs and tenrecs besides humans.  Snakes such as these boas could be vitally necessary to ecosystems in Madagascar and still so little is known.  Right now Sanzinia madagascariensis is listed by IUCN (International Union for conservation of nature) as a species of least concern, meaning it faces little to no threat of extinction. The splitting of the species into two could at least make each species a little more vulnerable, each having a much smaller population. Both species in the Acrantophis genus are also listed as species of least concern but with little knowledge of them, how will we know when they fall into grave danger or when we inadvertently threaten their survival?  Madagascar is a nation quickly being deforested, largely out of desperation to feed a growing population.  Forests are being turned into stepped rice fields at dizzying speeds and it seems important to understand every bit of its wildlife and ecology before it’s too late, not only for Madagascar but also for what it can tell us about the whole of life on an increasingly threatened planet.  Dr. Vences continues,

“Madagascar is simply a country with an amazing biodiversity, especially because of the very high endemism – most animals and plants occurring in Madagascar occur nowhere else on Earth. And much of these unique species are threatened due to fast rates of habitat loss, which makes it urgent to define conservation priorities in this country. Certainly for me and others, this is one argument to continue working there. As for the two boa genera, there certainly still is much to learn…”

Madagascar is an island and a nation of paradoxes and the unexpected. The strange, nocturnal Aye Aye is seen by some groups as a harbinger of evil by others as the embodiment of ancestor spirits.  Snakes were to missionaries who spread their beliefs in Madagascar symbols of Satan and man kinds fall.  Malagasy is a language most related to Asian languages on an island much closer to Africa than to Asia.

The boas of Madagascar from any perspective must be seen as beautiful, mysterious and like all reptiles comfortingly un-human.  We can take comfort in our busy daily lives of knowing that somewhere on a strange tropical island off of Africa snakes still prowl through jungle and rice fields, bask in the sun and creeps through the night searching for prey.  In the end shouldn’t there be some mystery left in herpetology?  Shouldn’t we be comfortable acknowledging that this snake is not completely knowable?