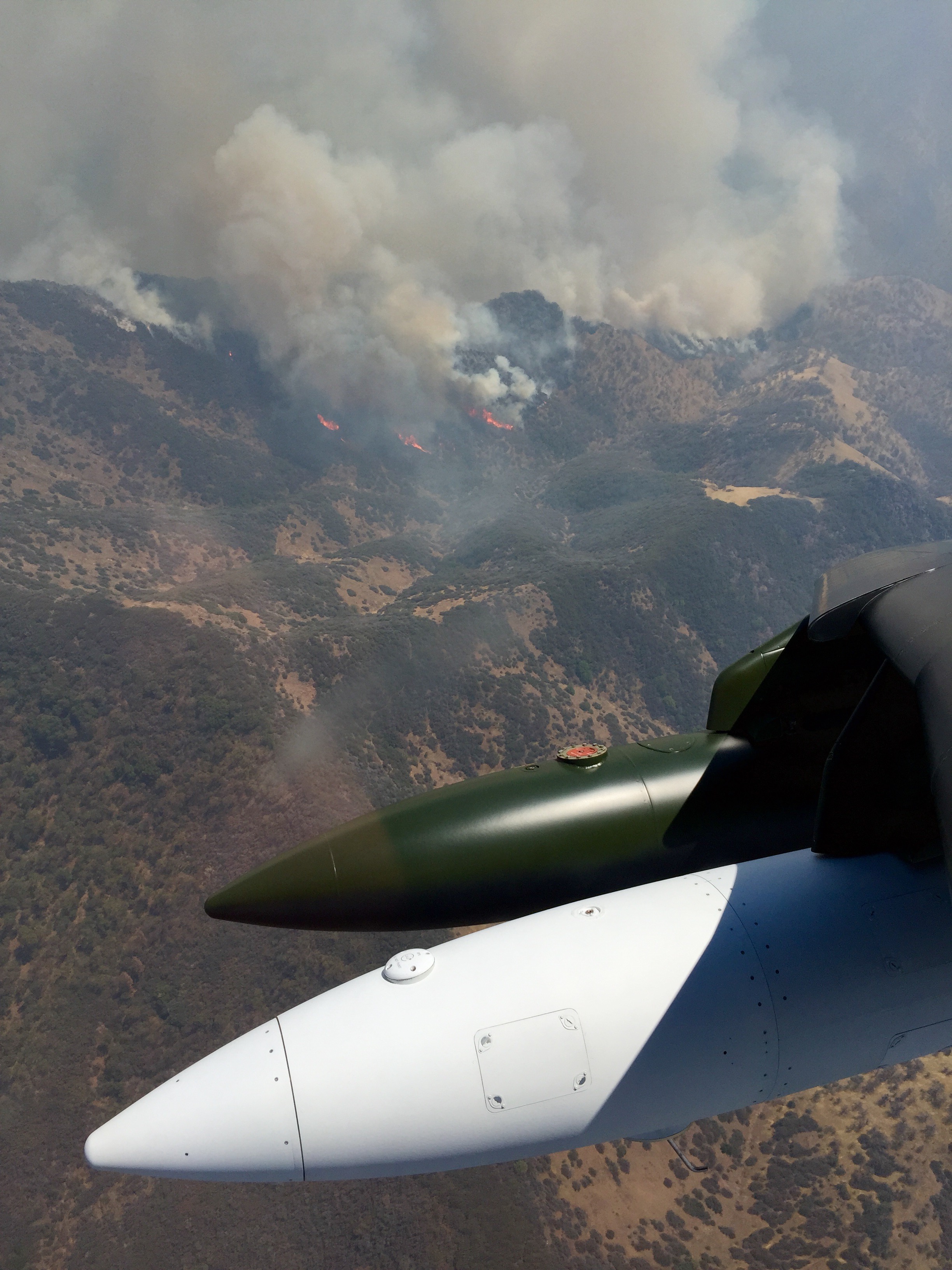 On Aug. 19, 2015, a team of scientists from NASA’s Ames Research Center organized the flight of an Alpha Jet to collect environmental data from two recent wildfires in California’s Southern Sierra Nevada mountain range.

As part of the ongoing Alpha Jet Atmospheric eXperiment (AJAX) project, pilots of H211, LLC, a NASA partner, flew through plumes of smoke from the “Cabin Fire” and “Rough Fire” in Sequoia National Forest, California, measuring ozone and greenhouse gases from the fires to understand their effects on air quality.

“It gives us a more complete picture of wildfires,” said Warren Gore, chief of the Atmospheric Science Branch at Ames, based in Moffett Field, California. “It gives information on what is burned and what pollution is produced. Ozone can cause respiratory distress when people breathe it in, whether they have respiratory problems or not. It could affect their health, and it could have a long term effect.”

The California Department of Forestry and Fire Protection (CAL Fire) believes lightning ignited the “Cabin Fire,” which has consumed approximately 7,000 acres in the Golden Trout Wilderness, north of Glendora, since July 19. The “Rough Fire,” which started on July 31, also a result of lightning, has burned more than 100,000 acres in Kings Canyon, near Hume Lake. Twenty-five hundred people from the Hume Lake Christian Camp and surrounding area were evacuated.

“Smoke from wildfires can be lifted high into the atmosphere and transported long distances. It affects not only local air quality but can also have regional and even global impacts”, said Laura Iraci, AJAX Principal Investigator and research scientist at Ames. “For example, the smoke from these fires is impacting large areas of California and Nevada.”

“We’ve seen more methane for every molecule of carbon dioxide emitted from these particular fires than we’ve seen with previous fires,” said Emma Yates, a research scientist at NASA Ames. “We don’t know what’s causing this. Interactions between urban pollution and forest fires is a big challenge, the difficulty being how to identify how much each source contributes to measured concentrations within a mixed wildfire-urban plume. Some researchers speculate that could be playing a role.”

This flight was the 167th AJAX mission in the past five years, using onboard equipment to make measurements of the atmosphere. Results gathered from the 2013 Rim Fire in Stanislaus National Forest are being prepared for publication. Similarly data from this year’s fires will be analyzed and shared with the science community and other stakeholders, like the California Air Resources Board and the San Joaquin Valley Air Pollution Control District. Information provided by AJAX can supplement the decision process of these regulatory agencies.

NASA enables studies that unravel the complexities of our planet from the highest reaches of Earth’s atmosphere to its core. NASA’s expertise in space and scientific exploration contributes to essential services provided to the American people by other federal agencies, such as weather forecasting and natural resource management. Scientists worldwide use NASA data to tackle some of the biggest questions about how our planet is changing. Earth science research at Ames features basic and applied research in atmospheric and biospheric sciences, and conducts airborne science campaigns.