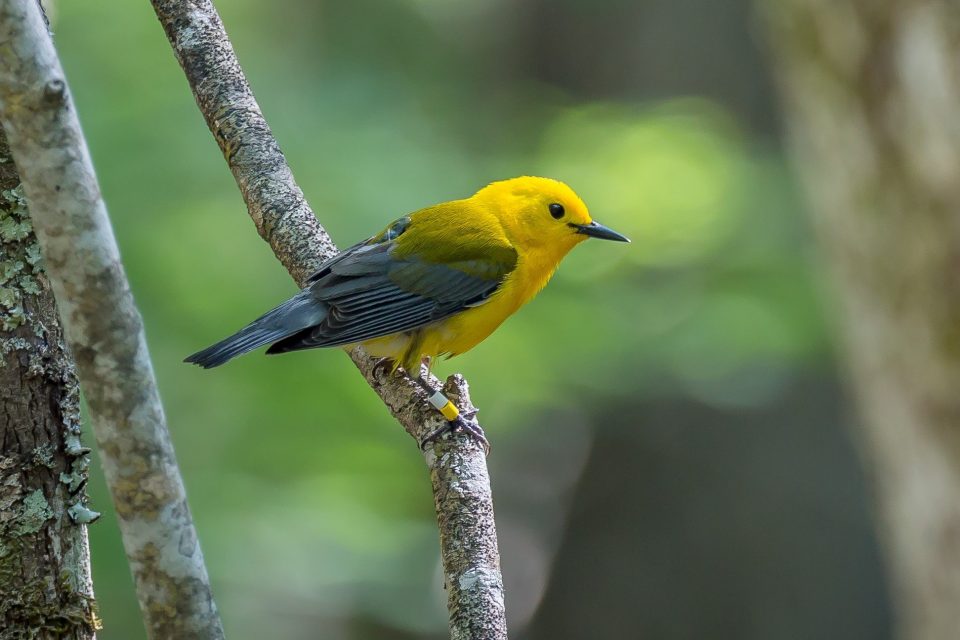 To protect these songbirds, researchers need to know where the birds go during their annual migrations, as these overwintering locations could hold the key to the birds’ rapidly declining populations.

To accomplish this, researchers at Ohio State University used 149 geolocators, which are small tracking devices that pinpoint a bird’s location in order to trace the migration patterns of Prothonotary Warblers.

The researchers captured birds at their eastern US nesting sites and attached the locators before the birds left for Latin America.Tracking migration patterns could help with songbird conservation

When the birds returned, the researchers recovered 34 locators. The data revealed that the majority of warblers congregated to a small area of northern Colombia and used the same two major stopover sites in Central America along the way to their winter destination.

Many of the birds wintered in inland areas, which was a surprise considering past research has shown that the birds prefer coastal mangrove habitats.

Deforestation and sociopolitical changes currently threaten the bird’s Colombia habitat. Knowing where the birds migrate to can help focus conservation efforts to specific areas most at risk of habitat declines.

“The most surprising thing about the results was the overwhelming importance of Colombia to this species,” said Christopher Tonra, the leader of the study. “We weren’t sure what to expect in terms of migratory connectivity, but we never expected that nearly every bird would use the same wintering region. This provided a clear conservation message and shows the power of geolocators in addressing gaps in our knowledge of migratory songbirds.”

The researchers published their findings in The Condor: Ornithological Applications journal.