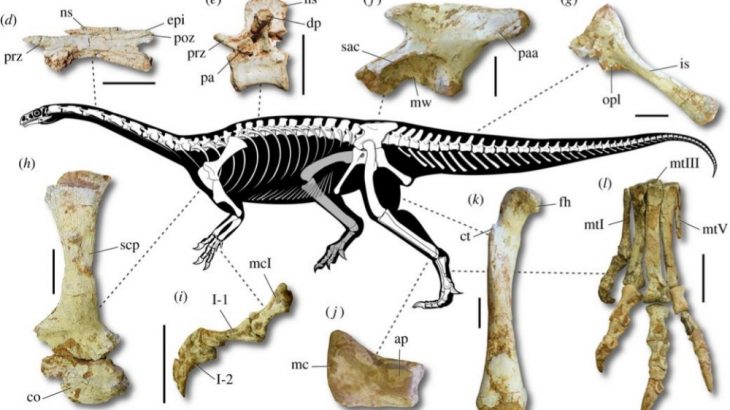 A mother’s phone call seems to be have been the key to the discovery of a new dinosaur: Macrocollum itaquii.

The fossilized bones represent what may be the oldest known long-necked sauropodomorph ever discovered. And they were discovered after Estefânia Temp Müller gave her paleontologist son a call in 2012, to tell him his uncle had found some fossils on his property in southern Brazil.

His mother’s call led to the discovery of the new species, Dr. Rodrigo Temp Müller told the website LiveScience. He and his colleagues found the remains of three long-necked dinosaurs at the property in Agudo, with two skulls perfectly preserved.

Macrocollum itaquii lived about 225 million years ago, during the Triassic. The dino was about 11 feet long and 5 feet tall, and weighed in at 220 pounds. Unlike its relative the brontosaurus, M. itaquii walked on two legs, not four.

Its long neck probably gave it an advantage when foraging for food and allowed it to reach vegetation high in trees – an important trait for the likely herbivorous species.

“There are three articulated skeletons in five tons of rock,” Müller, from the Federal University of Santa Maria in Brazil, told The Independent. “This is unique. It suggests these animals probably died together, as they share the same degree of disarticulation.”

If the dinosaurs truly did die together, it suggests they lived in groups rather than separately, he added.

“It had a small head and a long neck,” Müller told LiveScience. “In its hand, there was a large and sharp claw on its ‘thumb.'”

In addition to its distant connection to brontosaurus, Macrocollum itaquii appears to be related to several species discovered in India. Brazil and South Asia were both once part of a supercontinent known as Gondwana, before it broke up into South America, Africa, the Indian subcontinent, Australia and Antarctica.

The study has been published in the journal Biology Letters.