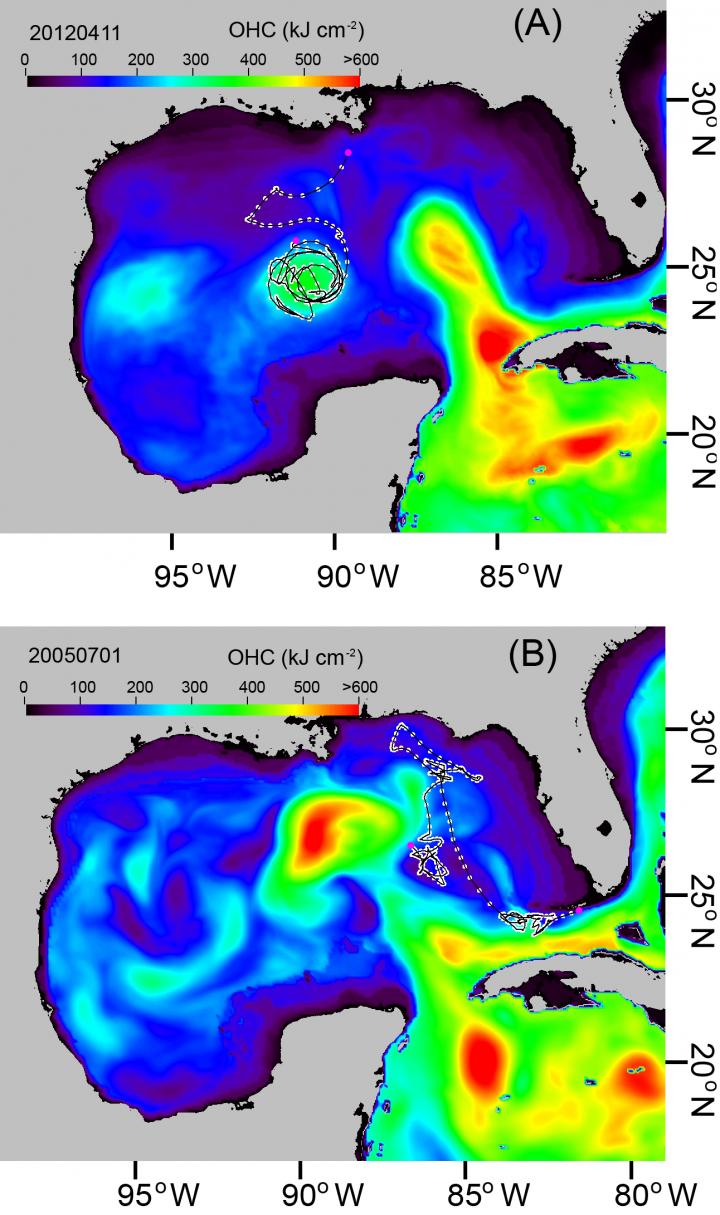 Researchers at the University of Miami (UM) Rosenstiel School of Marine and Atmospheric Science developed a new method to estimate fish movements using ocean heat content images, a dataset commonly used in hurricane intensity forecasting. With Atlantic tarpon as the messenger, this is the first study to quantitatively show that large migratory fishes, such as yellowfin and bluefin tunas, blue and white marlin, and sailfish have affinities for ocean fronts and eddies.

Ocean heat content (OHC) relative to the 26°C isotherm, a measure of heat stored in the upper surface layers of the ocean, has been used for more than four decades by scientists to help predict hurricane intensity. Over the past two decades, OHC has been monitored daily using satellite fields and in-situ data that provide basin-scale variability for both weather and climate studies. In addition to providing the OHC for forecasting, these previous studies showed OHC images reveal dynamic ocean features, such as fronts and eddies, in the ocean better than just using standard techniques (e.g., sea surface temperature), especially during the summer months.

The researchers compared data on fish movements obtained from pop-up satellite tags affixed to the highly migratory fish alongside maps of the heat stored in the upper ocean. “Using an advanced optimization algorithm and OHC maps, we developed a method to greatly improve geolocation accuracy and refine fish movement tracks derived from satellite tags,” said Jiangang Luo, lead author and UM scientist at the Tarpon and Bonefish Research Center. The analysis revealed that fish commonly swim along the boundaries of water features in the ocean, such as fronts, like the Florida and Loop Current and their complex eddy fields.

“Using the OHC approach in a new way offers an unprecedented view of how these animals move with currents and eddies in the ocean,” said Nick Shay, UM Rosenstiel School professor of ocean sciences. “Our study provides a more detailed picture of the ocean ecosystem as an entity.”

In one 109-day analysis, the researchers documented a yellowfin tuna move along a weak front off the Mississippi River before reaching an eddy centered in the Gulf of Mexico. In separate analysis, a yellowfin tuna swam around the periphery of the same eddy many times over a 20-day period, rarely passing over it.

Eddies are swirling masses of water that have been shed from strong ocean current fronts, and pump nutrient-rich water to the surface. Fronts are a type of current created at a boundary between two distinct water masses with differing physical properties, such as different temperatures, salinities. In the Gulf of Mexico, warm eddies are often shed from the Loop Current in the summer months causing a rapid intensification of hurricanes (e.g., Katrina) as they pass over it.