New Zealand works to save the world’s largest parrot • Earth.com 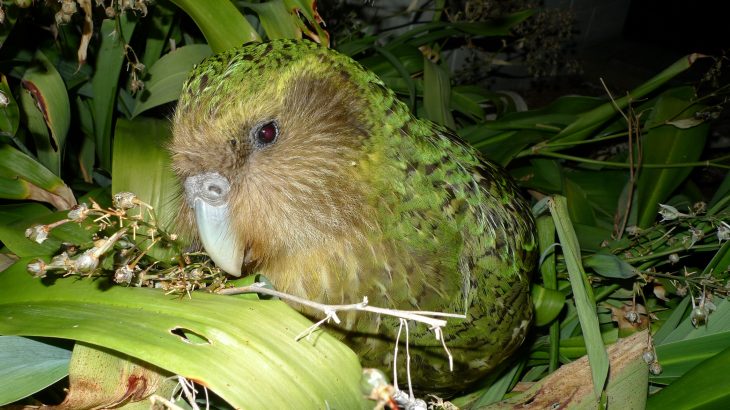 New Zealand works to save the world’s largest parrot

Dubbed the “strangest parrot on Earth,” New Zealand’s kakapo (caw-caw-poe) were on the brink of endangerment less than 50 years ago. But now, having found an entirely new population of kakapo, New Zealand conservationists are working hard to keep the population safe and grow their numbers.

The nocturnal kakapos have owl-like facial features. Standing at about two feet tall and boasting plump, green feathers, they are only able to waddle and climb rather than fly. Further, the kakapo can live between 60 and 90 years.

“As the largest parrot on Earth, (they are) quite the sight in person,” Wes Sechrest of Global Wildlife Conservation told the Washington Post. “They have a teddy-bear quality to them with their soft feathers, wide eyes and owl-like expressions.”

In 1977, after humans depleted the kakapos’ resources and predators helped wipe out the majority of the population, only 18 live kakapos — all male — were recorded. That is, however, until scientists discovered an entirely new population of kakapos. Conservationists blended the two groups on three small predator-free islands. Today, there are about 147 adult birds in New Zealand — about triple the population in 1995.

Because kakapos only breed when fruit-bearing trees bloom, this means that the years the trees don’t bloom, there is no kakapo breeding. So, scientists sometimes partake in assisted breeding. Females then lay up to four eggs, which hatch within 30 days, and are heavily monitored by conservationists via nest cameras, infrared beams, microchips, and radio transmitters fitted under the birds’ wings. If chicks need help hatching, then eggs are placed into incubators while the mothers watch over “smart eggs” that wiggle and crack like real eggs to prepare the mother for caretaking.

You can follow kakapo news get involved in the conservation process and recovery efforts here.

“Kakapo are amazing birds, unlike anything else on Earth,” scientist Andrew Digby told the Washington Post. “But there are lots of other endangered species, including some near where you live. Once these species are gone, we’ll never get them back. If you’re interested, get involved in conservation. The best way to start is to volunteer at a reserve or sanctuary near where you live” and to join or learn about conservation groups.”