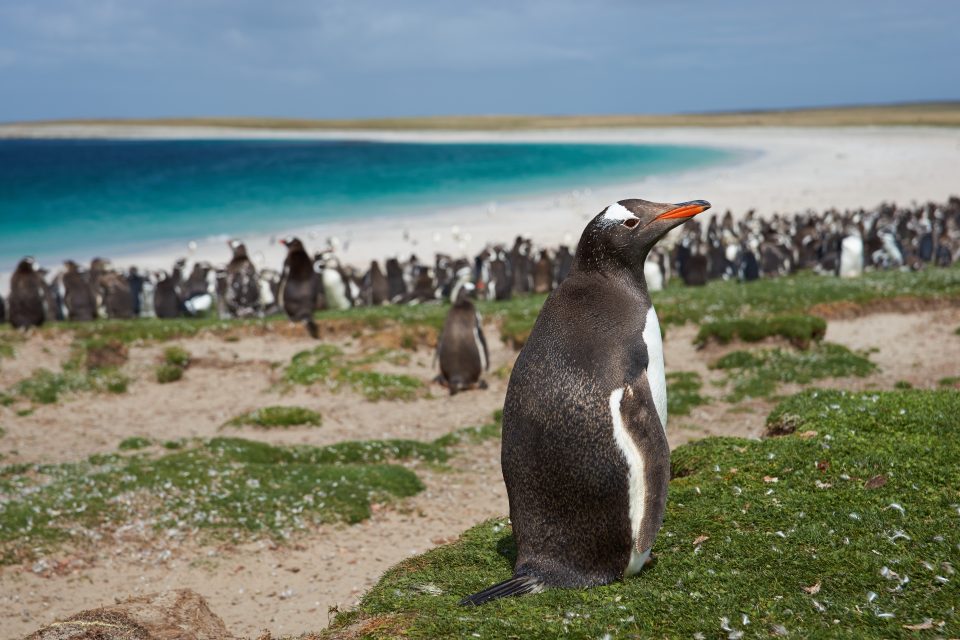 The ecosystems of the Falkland Islands were transformed by seabirds thousands of years ago. Researchers at the University of Maine explain that high concentrations of seabird poop, or guano, increased nutrient availability that nourished the land and soil.

Today, the Falkland Islands remain a sanctuary for many important seabirds, including five species of penguins. However, the coastal breeding grounds have come under increasing pressure from sheep grazing and erosion in recent years. In addition, there are no long-term observations available to understand how the ground nesting seabirds will respond to climate change.

By reconstructing the paleoecological history of the islands, the researchers determined that the birds initially colonized the region 5,000 years ago during a period of cooling climate conditions. The fact that seabirds were absent in the islands before this time suggests that they may be sensitive to warmer sea surface temperatures, which can impact their food supply, explained the study authors. As the South Atlantic warms today, it is possible that the Falkland Islands may not remain a hotspot for breeding seabirds.

“Our work suggests that as the Southern Ocean continues to warm in the coming decades, the Falkland Islands seabird communities may undergo abrupt turnover or collapse, which could happen on the order of decades,” wrote the researchers. They noted that the Falkland Islands are at the boundary of a number of potential climate drivers.

There are no native mammals or trees in the Falklands, and sheep were brought to the islands by settlers in the 17th century. The locals currently make a living from sheep farming, fishing, and tourism.

The 14,000-year record developed by the researchers showed that for 9,000 years before the arrival of seabirds, the East Falklands were dominated by low levels of grasses, a heathland of ferns, and dwarf Ericaceous shrubs. But then, around 5,000 years ago, the region was transformed by elements such as phosphorus, zinc, and grass pollen that were deposited by the seabirds. The analysis of the record indicates that within 200 years of seabird colonization, tussac grasslands became established.

Study lead author Dulcinea Groff conducted the research during expeditions in 2014 and 2016 that were led by Jacquelyn Gill, an associate professor of Paleoecology and Plant Ecology in the UMaine Climate Change Institute.

“Our work emphasizes just how important the nutrients in seabird poop are for the ongoing efforts to restore and conserve their grassland habitats. It also raises the question about where seabirds will go as the climate continues to warm,” said Groff.

“Our 14,000-year record shows that seabirds established at Surf Bay during cooler climates. Seabird conservation efforts in the South Atlantic should be prepared for these species to move to new breeding grounds in a warmer world, and those locations may not be protected.”

According to the researchers, it is clear that the addition of seabird populations bringing nutrients from the marine environment to the island drove changes in the terrestrial plant community structure, composition, and function, as well as in fire activity and nutrient cycling. What remains unclear is what drove the abrupt ecosystem shift, said Professor Gill.

“We know seabirds arrived at Surf Bay during a time when the climate was becoming cooler in the South Atlantic, though we still don’t know for sure what it was they were tracking. We also don’t know where these birds took refuge when climates were warmer, and that’s concerning as the South Atlantic gets hotter into the future,” explained Professor Gill.

“Our study is also a powerful reminder of why we need to understand how different ecosystems are connected as the world warms. We know that many seabirds in the South Atlantic rely on these unique coastal grasslands, but it turns out that the grasses also depend on the nutrients seabirds provide. Because they rely on ecosystems in the ocean and on land for their survival, seabirds are really good sentinels of global change.”

“We just don’t have good long-term monitoring data for most of these species, so we don’t know enough about how sensitive they are to climate change. The fossil record can help us fill in the gaps.”

The study is published in the journal Science Advances