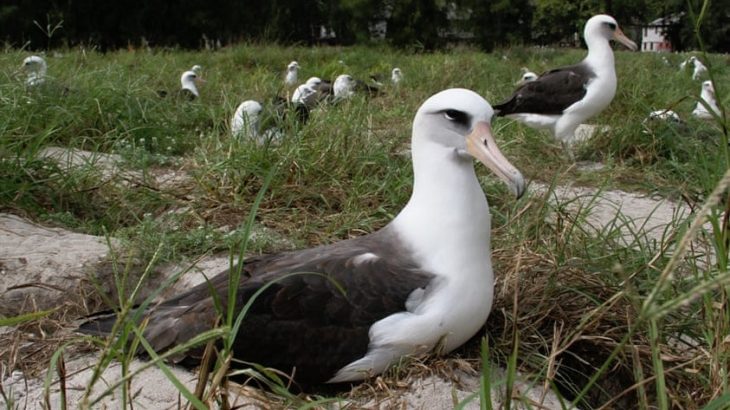 The laysan albatross is an impressive bird.  It looks much like a giant seagull, colored white with dark gray wings and back and large webbed feet and a wing-span of six feet.  The albatross eats mainly squid but also fish and crustaceans it can scoop from the surface of the ocean. Mainly, the albatross is known as a seafaring wanderer, and drinks sea water and expels much of the salt through nasal glands just above the eyes.  The salt oozing from the glands of albatross and other sea birds often makes them look as if they were crying, or just struck with an illness.

Most of the bird’s life is spent far out at sea, 30 miles or more from land.  Because the bird only comes to land to breed and raise chicks each year, there is still much about the albatross’ life scientists don’t understand.  Most of the research of the laysan albatross as well as other sea birds focuses on the time they spend on or near land while nesting. Besides research, explorers to remote islands and the polar regions have sometimes eaten albatross chicks and their eggs, for necessity or for a nice change from ship rations.  Although eating albatross never gained widespread popularity, casual consumption like this helped lead to the extinction of the dodo and also prompted protection for all albatross species in the South Atlantic and other areas.

Midway Atoll itself is somewhat unique. Today the island is a national wildlife refuge managed by the US Fish & Wildlife Service, but historically it’s a remote island at the edge of the Hawaiian archipelago.  Midway is one of the world’s oldest atoll formations, meaning it was created by the top of a mostly underwater volcano where reefs systems and soils have aggregated to create a small island.  Part of Papahānaumokuākea Marine National Monument, the atoll is perhaps best known for Midway Battle in World War II.  Along with the laysan albatross, Midway Atoll is breeding habitat for 20 seabird species.  Together these birds make a nesting population of 3 million individual birds on Midway’s three islands.

It’s not surprising that the birds would pick a place like Midway, the remote location of the island acts as a protective barrier between the birds and traditional predators that might attack birds, their eggs or their chicks, including humans.  The albatross actually colonized the remote islands in the Hawaiian archipelago after millions of birds were killed for feathers and lost breeding ground to military development, according to the Cornell Lab of Ornithology.  The oceans around Midway are also host to a thriving marine habitat, which supplies abundant food to the seabirds.  There are over 250 reef fish and invertebrate species found around midway.

The Guardian reports that in 1956, biologist Chandler Robbins first captured a female albatross and put an identification band around her ankle.  This is standard biological protocol, and according to the USGS Bird Banding Laboratory, an average of 1.2 million birds bandings are reported annually over the last decade.  There are over 8 million recorded bandings of seabirds, including the albatross from 1960 to February 18, 2019.  These numbers are only the birds banded by the US federal government, state agencies and even non-profit organizations can also band birds as well as, of course, foreign governments.

Banding can be dangerous for birds; occasionally one gets injured being captured or banded.  It can also be stressful for biologists who don’t want to kill a bird or get a beak slash in their face but it’s the easiest way to verify the identity of individual birds.  All of this is pretty normal. What is out of ordinary is that the bird, a female laysan albatross now named Wisdom, is still alive. Wisdom outlived Chandler Robbins who died in 2017 at 98 years old.  The USGS estimates that Wisdom has flown some 6 million miles over her life.  For birds that range as far north as Alaska and as far south as Central America, this is a pretty normal distance to cover over time.  Even more impressive than her travels, Wisdom is still laying eggs.

When Wisdom was captured for banding, Chandler Robbins estimated her to be roughly 5 years old, and if that estimate is correct, it would mean Wisdom is now about 68 years old.  This makes Wisdom the oldest known wild bird in the world. Wisdom, like all laysan albatrosses, didn’t start breeding until she was relatively old by bird standards – 8 or 9 years.  Since the first time Wisdom bred, she’s raised approximately 36 chicks to fledging over her years on Midway. With her long time mate, Akeakamai, she’s watching over a new egg that could lead to another successfully fledged chick and another laysan albatross to grace the world.

Laysan albatrosses are slow to reach maturity though.  From the time an egg is laid, it takes as long as 66 days before the egg hatches.  It takes about 100 days after hatching for the young albatross to be ready to leave the nest and take to the sky and sea.  Because laysan albatrosses lay only one egg per breeding season, it’s an all or nothing proposition for the future of one more young albatross.