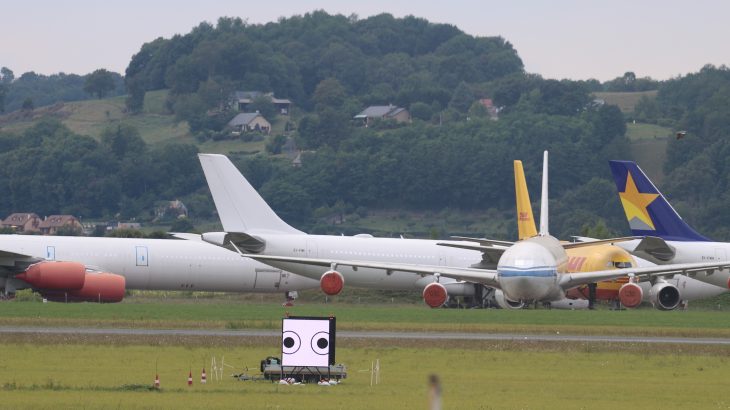 Collisions with human activity cause some of the highest numbers of bird deaths every year.

According to one study, 365 to 988 million birds are killed annually in the United States through collisions with buildings. In France, over 800 bird collisions with planes are reported every year.

Wind turbines, airplane traffic, urban expansion, and infrastructure are all major drivers of bird decline, and so findings effective ways to repel birds away from high-risk collision areas is critical.

Researchers from the Centre National de la Recherche Scientifique (CNRS) and the Université de Rennes 1 in France and the aeronautics company Airbus collaborated together to create a safe and effective visual display that keeps birds away.

The result was the development of a new visual pattern that specifically works to repel raptors, and the research was published in the journal PLOS ONE.

The study not only helps with keeping birds protected and away from high-risk areas, but also could also aid in future research into raptor visual cognition.

Raptors are not able to detect glazed surfaces and often don’t see a moving object until it’s too late.

To remedy this, the researchers took what they already knew about raptor vision and experimented with a series of visual stimuli, testing how captive raptors responded.

It took over 300 different attempts to find a pattern that tricked the birds into staying away by serving as a kind of optical illusion.

Two black circles displayed on a white background made the birds think that a collision was imminent.

The researchers tested this pattern at the Lourdes-Tarbes-Pyrénées Airport, an area where buzzards (a kind of raptor) has been known to forage. The black circles were displayed on two LED screens continuously throughout the day.

8,800 observations were made while the LED screens were displayed near the planes. The researchers noticed a drop in collisions and that the birds stayed clear of the areas near the screens.

The results of the study are promising and show that it’s possible to create efficient and sustainable solutions for repelling birds away from high-risk collision areas.