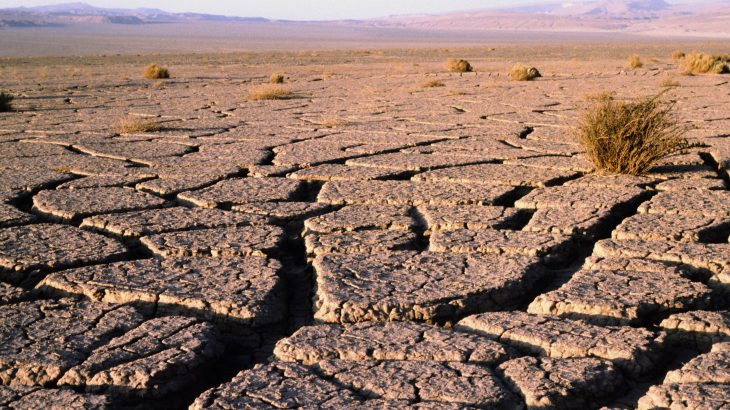 Cyanobacteria extract water from rocks to survive extreme desert conditions, according to a new study led by UC Irvine. The findings demonstrate how life can thrive in places that appear to be lacking in water, such as Mars.

“The Army Research Office funded this project because they want to understand how organisms can survive in extreme environments,” explained study lead author Professor David Kisailus.

“They also wanted us to help translate that to enabling humans to cope with the harshest of conditions, whether it be out in the middle of the desert or while exploring other planets.”

The study was focused on interactions of Chroococcidiopsis, a desiccation-resistant cyanobacteria, and the rocks they colonize in the Atacama Desert, which is one of the driest places on the planet.

The microorganisms dwell beneath a thin layer of rock that helps to shield them from harsh desert conditions such as excess sunlight, extreme dryness, and brutal wind. The water-containing rock, called gypsum, is made up of calcium sulfate-based minerals.

Study co-author Jocelyne DiRuggiero is an associate professor in the Department of Biology at Johns Hopkins University.

Professor DiRuggiero collected gypsum samples in the Atacama Desert and brought them back to her lab in the United States. She cut small pieces of rock that contained cyanobacteria and sent them to Professor Kisailus for analysis.

The researchers were surprised to discover that cyanobacteria change the nature of the rocks they occupy in dry, desert conditions. Through water extraction, the microorganisms transform gypsum to anhydrite, a dehydrated mineral.

Wei Huang is a UCI postdoctoral scholar in Materials Science & Engineering. Huang noticed an overlap in concentrations of anhydrite and cyanobacteria in the gypsum samples collected in the Atacama, which spawned an investigation.

“Our analysis of the regions of rock where microbes were colonized revealed a dehydrated phase of calcium sulfate, suggesting that they extract water from the rock to survive,” said Professor Kisailus. “We wanted to do some more controlled experiments to validate that hypothesis.”

The experiment was conducted under two different conditions. The first involved the presence of water to mimic a high-humidity environment, while the second was  completely dry to mimic desert conditions.

The experiment revealed that when moisture was present, the gypsum did not transform to the anhydrite phase. According to Professor Kisailus, this was because the cyanobacteria didn’t need water from the rock when they got it from their surroundings.

“But when they were put under stressed conditions, the microbes had no alternative but to extract water from the gypsum, inducing this phase transformation in the material,” explained Professor Kisailus.

Using a combination of advanced microscopy and spectroscopy to examine the specific interactions that take place, the team found that the cyanobacteria bore into the rock like tiny miners by excreting a biofilm containing organic acids.

“Researchers have suspected for a long time that microorganisms might be able to extract water from minerals, but this is the first demonstration of it,” said Professor  DiRuggiero. “This is an amazing survival strategy for microorganisms living at the dry limit for life, and it will guide our search for life elsewhere.”

The findings also have implications for how people living in arid regions may someday derive hydration from available minerals.

Dr. Robert Kokoska is the Program Manager at the Army Research Office.

“The Army has a strong interest in how microorganisms well-adapted to extreme environments can be exploited for novel applications such as materials synthesis and power generation within these harsh environments,” said Dr. Kokoska.

“This study provides valuable clues for uncovering the evolved design strategies used by these native, desert-dwelling microbes to maintain their viability in the face of multiple environmental challenges.”