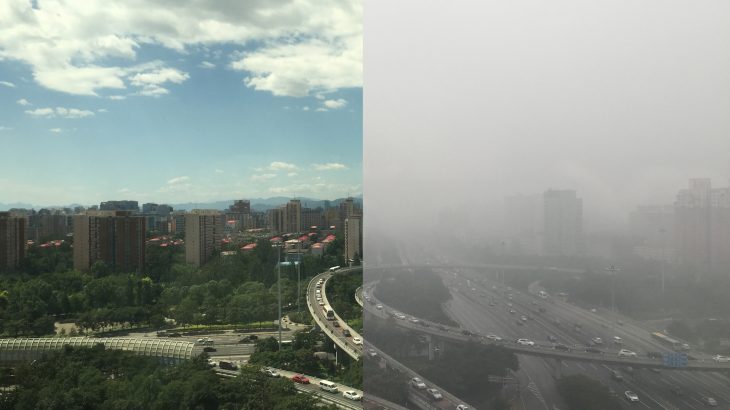 The nation of China isn’t exactly known for being environmentally friendly, and its capital of Beijing has routinely been one of the most polluted cities in the world. But in the last 15 years or so, the Chinese government has invested billions of dollars to clean up the air pollution that is estimated to result in more than a million deaths per year.

Specifically, leaders are focusing on reducing sulfur dioxide (SO2) emissions from coal-burning power plants – one of the major sources of the particulate air pollution that claims so many lives. While their efforts have been successful in reducing these emission, there are still extreme pollution events that mainly occur in the winter. A new study from Harvard University, published in Geophysical Research Letters, may have found the reason why.

The study ultimately found that the key to reducing extreme wintertime air pollution is likely in reducing formaldehyde emissions – not just sulfur dioxide.

“We show that policies aimed at reducing formaldehyde emissions may be much more effective at reducing extreme wintertime haze than policies aimed at reducing only sulfur dioxide,” says Jonathan M. Moch, a graduate student at the Harvard John A. Paulson School of Engineering and Applied Sciences (SEAS) and first author of the paper. “Our research points towards ways that can more quickly clean up air pollution. It could help save millions of lives and guide billions of dollars of investment in air pollution reductions.”

It was determined that instruments used to analyze haze particles can easily misinterpret sulfur compounds as sulfate when it’s actually a molecule called hydroxymethane sulfonate (HMS). HMS is formed by the reaction of sulfur dioxide with formaldehyde in clouds or fog droplets.

“By including this overlooked chemistry in air quality models, we can explain why the number of wintertime extremely polluted days in Beijing did not improve between 2013 and January 2017 despite major success in reducing sulfur dioxide,” says Moch. “The sulfur-formaldehyde mechanism can also explain why polices seemed to suddenly reduce extreme pollution last winter. During that winter, significant restrictions on SO2 emissions brought concentrations below levels of formaldehyde for the first time, and made SO2 the limiting factor for HMS production.”

Formaldehyde emissions primarily come from vehicles and the major industrial facilities – such as chemical and oil refineries – in eastern China. It comes as no surprise that the researchers are recommending policymakers direct their efforts towards reducing emissions from these sources in order to improve the public health of their nation.