Ozone pollution threatens the health of plants and pollinators • Earth.com 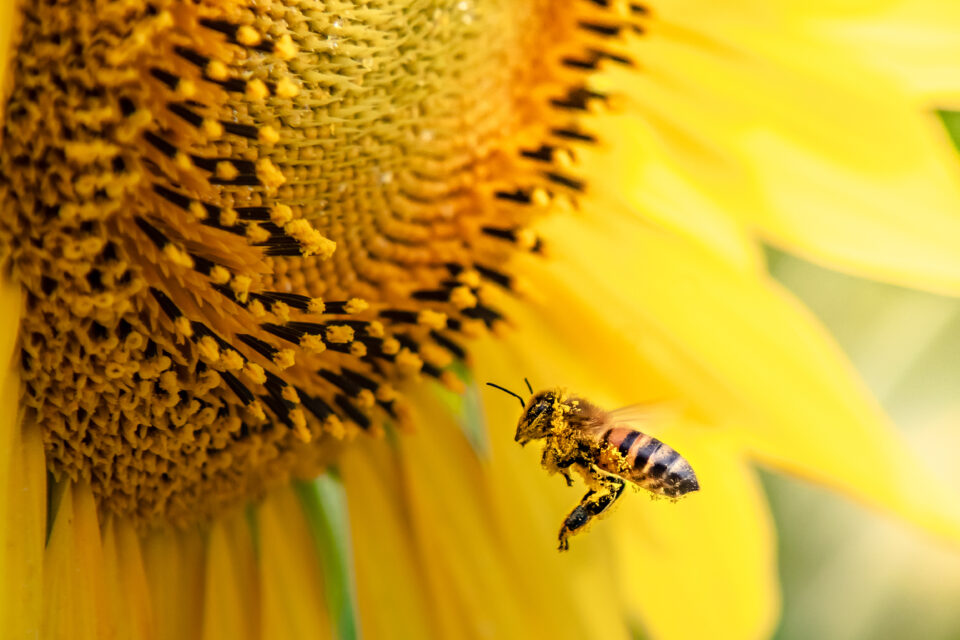 In recent decades, ozone levels in the lower troposphere have increased. Ozone (O3) is a secondary pollutant formed during the reaction of volatile organic compounds (VOCs) with nitrogen oxides (NOx) in the presence of sunlight. It damages the leaves of plants and inhibits photosynthesis, accelerates and extends flowering season, and alters the number of flowers open at any one time. In addition, ozone changes the chemical structure of pollen, inhibits pollen tube growth and alters the amount of pollen and nectar formed, as well as their chemical composition.

A new study by scientists from China and Spain has now proposed that ozone may also be affecting the health of insect pollinators in ways that impair their ability to pollinate flowers successfully. The study takes the form of a literature review that highlights the ways in which ozone impacts insect pollinators.

“There is much noise about the direct effects of agrochemicals on pollinators, a subject of profound societal attention, but it now emerges that ozone is a silent threat to pollinators and thus pollination,” said lead author Evgenios Agathokleous, an ecologist at Nanjing University of Information Science & Technology. “These impacts of ozone have long been missed.”

Ozone changes the chemical composition of leaves and the amount and blend of plant-emitted VOCs. This means that leaves and flowers may develop unusual colors which can confuse pollinators searching for suitable blooms. In addition, the VOCs provide important chemical signals that attract pollinators and, if these change in composition, the plant-insect interactions may be altered as a result. Ozone also produces new volatiles that may be unfamiliar to the pollinating insects looking for cues about which flowers to visit.

This colorless gas is an important ally when it occurs in the stratosphere, 12 km above sea level. Here it forms naturally and helps protect the Earth from the Sun’s harmful rays. However, when it occurs in the troposphere, the region of atmosphere closer to Earth’s surface, ozone is a damaging pollutant. Tropospheric-level ozone gas is created by a photochemical reaction between VOCs – emitted by vegetation and commonly found in substances such as paint and aerosols – and oxides of nitrogen, which are released when fossil fuels burn. Tropospheric ozone levels have been rising because a warming climate is creating optimal conditions for its formation.

The research, published in the journal Trends in Ecology & Evolution, also indicates that ozone affects pollinators directly by altering their olfactory learning ability, decreasing their recall of learned scents, and enhancing their response to new scents. Ozone may further decrease the proportion of active pollinators at any one time, a distress behavior that implies fewer potential foragers will be around to pollinate flowers.

“Changes in the composition of the volatile blends could also have severe implications to pollinators because they might not recognize host plants and their qualities in the same way they did in the past,” said Agathokleous. “Within plant tissues, ozone pollution could decrease the amount of nutrients that are essential to insects, increase the abundance of chemicals that are harmful to insects ingesting them, and degrade the overall quality of plant tissues.”

The study authors conclude that there may be some significant ecological consequences of ozone pollution for the world’s pollinating insects. Ozone concentrations are usually lower during the night but, since night-time ozone levels are increasing, ozone pollution may affect nocturnal pollinators more than previously thought. They state that a new generation of interdisciplinary research programs is needed to evaluate the resilience of plant–pollinator interactions in areas exposed to ozone pollution.