People who are connected with nature have better coping skills • Earth.com 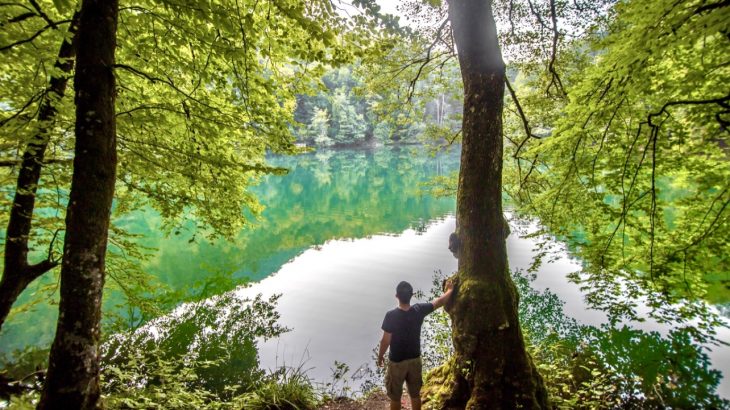 People who are connected with nature have better coping skills

Nature has a powerful influence on our psychological health and coping skills, even during the pandemic, according to a new study from the University of Connecticut.

Previous studies have confirmed a link between nature and a greater sense of well-being. The results of the current study also suggest that feeling connected with nature can protect against the detrimental mental health effects of traumatic events like the COVID-19 pandemic.

“Thinking about the natural world in an interconnected and harmonious way corresponds to improved psychological health, no matter where you are,” said study lead author Professor Brian W. Haas.

The researchers conducted surveys in America and Japan to measure how much the pandemic impacted the participants’ lives. The surveys were also designed to gauge the current psychological health and coping skills of the respondents, as well as how they viewed nature.

More specifically, the experts set out to analyze whether the individuals were in tune or connected with the natural world or if they had a worldview of “mastery over nature” – the belief that people have the ability to control the natural world.

The participants also reported on their stress levels and if the pandemic had affected them personally, including their employment or finances.

The analysis revealed that individuals who felt harmonious and connected with nature were coping better with the pandemic in both Japan and the United States.

“Clearly there’s great need for study as relates to the pandemic, not just now during COVID, but also of previous pandemics and for possible future pandemics,” said study co-author Professor Fumiko Hoeft.

“I feel like this is a really great lesson, and a moment for us to really appreciate that things like our relationship with nature do matter and make an impact on more tangible things, like our mental health, which we often forget.”

When looking at individuals with a mastery-over-nature worldview, the researchers noticed cultural differences in coping skills.

“We found that the Americans who believed that humans are, and should be, the masters of the natural world did not tend to cope well during the pandemic, while this was not the case in Japan,” said Professor Haas.

The experts propose the difference may be rooted in the concept of naïve dialecticism – the acceptance or tolerance of contradiction.

The study authors said that, in an increasingly virtual and technology driven world, taking a moment to appreciate nature has clear benefits regardless of where you live.

“In Japanese, there’s this word called ‘forest-bathing,'” said Professor Hoeft. “It’s basically when you go out into nature, and enjoy being surrounded by trees. It’s usually for forests, but you go walking and it’s supposed to refresh you.”

“People often talk about how they went out ‘forest bathing.’ I love thinking about these kinds of old phrases – do they have some real impact or real scientific background in the end? And I think this is one of them where this really does have a connection. There is some scientific truth behind this.”

“Think about taking a step away from Zoom for a moment and taking a walk and listening to the birds chirp,” said Professor Haas. “I mean, just the benefit of that, and understanding that we have a role in this natural world, and we’re part of it. I think that’s really intuitive and it’s obvious, but I think it’s also really, really important.

We’re showing very convincingly with empirical data that, during a very difficult time like we are in now, that it’s important to do these things to maintain your psychological health.”

While the research was focused on just two cultures, Professor Haas believes other cultures would also demonstrate a similar association between nature and good mental health. He predicts that it’s likely a universal phenomenon.

The study is published in the journal Personality and Individual Differences.