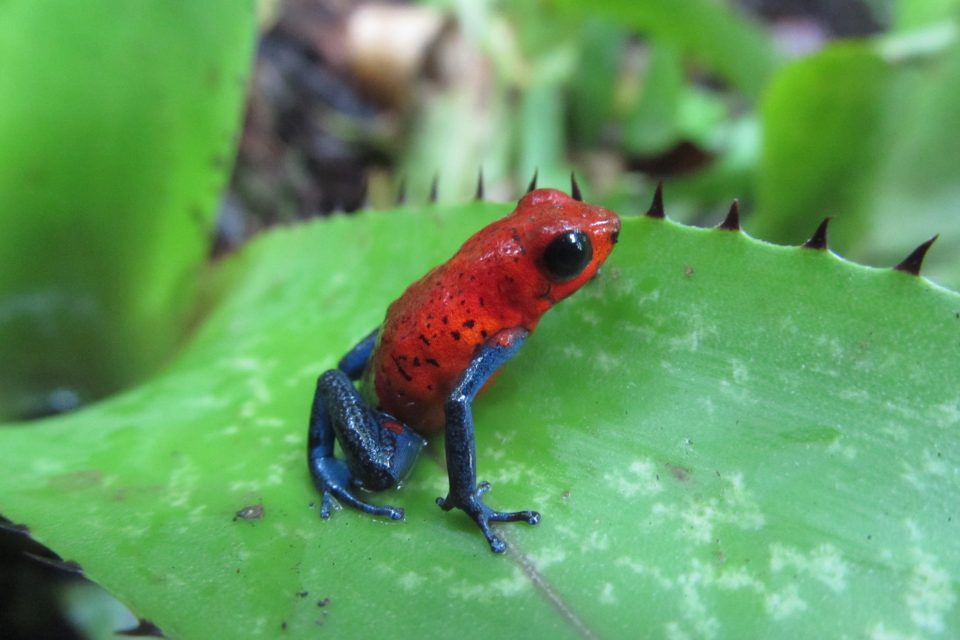 Poisonous frogs can adapt to warmer temperatures… but there’s a limit. Many species worldwide are being forced to adapt to new environments due to climate change and human activities.

In Costa Rica, poisonous frogs called strawberry frogs that once thrived in shady forest habitats now live sunny fields and pastures due to clearing for farmland.

Two undergraduate students recently led a study to determine how strawberry frogs are fairing in these hotter and drier areas and if habitat changes have led to new thresholds for heat tolerance.

The project was no small feat and required some innovative, out-of-the-box thinking on the part of the researchers Juana Rivera-Ordonez and Adrian Manansala.

“We’re trying to understand what happens to species when we transform forests for human land uses,” said Justin Nowakowski, who served as a mentor for the project. “For this study, we were trying to understand how strawberry poison frogs that live in these converted pastures handle warmer temperatures in these land uses compared to individuals that live in the forest.”

The researchers recorded the temperatures of 111 frogs in the wild and caught 32 strawberry frogs. The frogs were then placed in a temperature-controlled enclosure.

On one side of the enclosure, the temperatures were cooler to mimic the shadier forest habitat of some of the frogs. The other side was warmer, similar to temperatures found in the sunny and warm fields where the other frogs were collected.

The researches placed frogs on either side of the enclosure for two and a half hours and monitored how long the frog stayed on one side of the habitat and if it moved to seek out warmer or cooler temperatures.

After making a note of the frog’s preferred habitat temperature, the researchers next tested heat tolerance.

“We found that if there’s an increase in temperature, there may be some ability to acclimate or adapt, but in situations where temperatures change drastically, it may be bad news for them,” said Michelle Thompson, a fellow mentor on the project.

The team placed the frogs in water baths and raised the temperatures until the frogs were under stress.

It didn’t matter where the frogs were collected from, as their maximum tolerance for heat stayed the same. Even though certain frogs can adapt and live in sunny areas, these adaptations may not help with long-term climate change.

“It appears that for the time being, this species can eke out a living in these converted habitats using different behaviors to avoid extreme temperatures. But this is all subject to change,” said Nowakowski. “On top of habitat change, temperatures are rising due to climate change.”

Because strawberry frogs thrive in the shade and make do in shady patches in cleared pastures, the researchers say that the study could help inform conservation policies to ensure that species have a better chance of adapting to climate change.

“In the current biodiversity crisis that we’re a part of, we have to think of ways to make changes for positive impact,” said Thompson. “This is something we can act on. Where habitat conversion cannot be avoided, leaving small pockets of vegetation will let small populations of frogs persist. It shows that people can make a change.”

The study was published in the journal Biotropica.