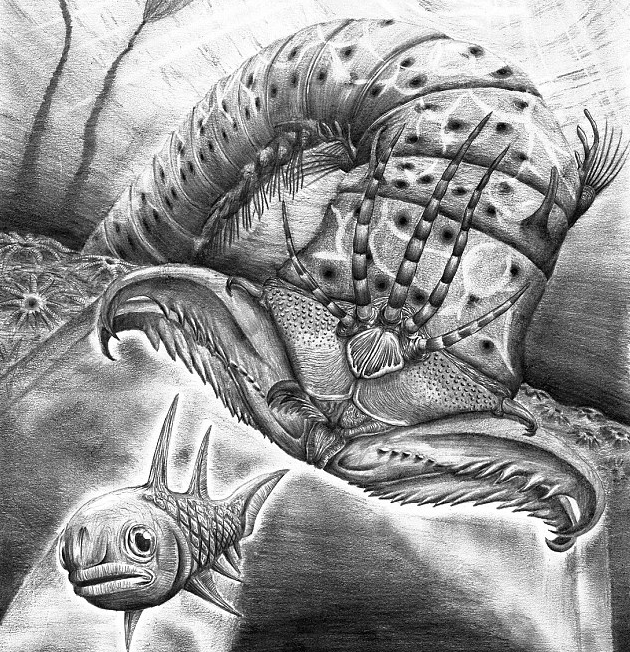 Life certainly was more interesting 400 million years ago. For instance, if you’d been around and decided on a cooling swim in the deep sea, you might have had to share the space with a six-foot-long carnivorous bristle worm. Yep, a slithery meat eater with what’s described as the most powerful set of jaws ever found on a creature of its kind. It’s also the first example of “gigantism,” the Darwinian supersizing of animals, found among marine worm fossil.

The “new” critter is called the bristle worm for its sensory bristles. That and its very impressive set of jaws – nearly an inch long – helped it hunt down and consume the fishy meals of its long-gone day.

The fossil was actually found in the mid-1990s and held ever since at the Royal Ontario Museum. The museum’s David Rudkin said, “This is an excellent example of the importance of looking in remote and unexplored areas for finding new exciting things, but also the importance of scrutinizing museum collections for overlooked gems.”

Unfortunately, the bristle worm does have a living relative, and it’s even more scarifying: the bobbit worm can grow to ten feet long. This still-living creature skulks at the bottom of the sea and uses its bristly sensors to target passing fish, squid and octopi. Researchers relied on what we know of the bobbit worm, as well as the fossil set of massive jaws, to calculate the description and size of the extinct bristle worm.

They settled on the scientific name Websteroprion armstrong for the bristle worm, in honor of bassist Alex Webster of the death metal rock band Cannibal Corpse, a favorite of one of the researchers.