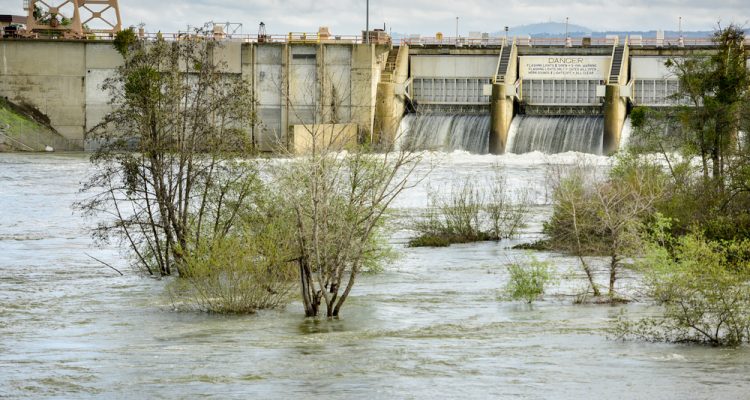 Relentless rain and snow has already done what experts said could take years in much of Northern California: ended more than five years of drought, or at least come very close. But the rain didn’t stop there.

Now, thousands of people across the northern part of California and in northeastern Nevada slowly flooding. Parts of Idaho, Oregon, and Utah have also seen extreme weather this week.

But California and Nevada have borne the brunt of the relentless rain that has streamed into the U.S. from the Pacific since the beginning of January.

Sacramento has received just over 15 inches of rain since January 1, according to the private monitoring website Weather Underground. That’s three times higher than the average rainfall from January 1 to February 10.

San Francisco has gotten 12.71 inches, more than twice its year to date average. Eureka has received more than 15 inches, not quite double its average.

The story is the same all over California, but it’s the precipitation in the mountains that is causing the most problems.

Storms since November of last year have dropped dozens of feel of snow in the high Sierra. The same storms saturated the ground at lower elevations until it could no longer absorb any more moisture, and filled the rivers.

Rain and snowfall have been anywhere from 150 to 300 percent of normal for much of Northern California, according to private forecasting firm AccuWeather. In that time, reservoirs across the state have gone from near empty to overflowing.

The storm that brought even more rain to Northern California last week also brought warm temperatures. In the lower elevations, at least, all that snow is melting – and it has nowhere to go.

A look at the damage

It’s causing chaos throughout the state. On Friday, Gov. Jerry Brown expanded his state of emergency from 49 counties – already swamped by storms in January – to 52, and formally requested a Presidential Major Disaster Declaration.

Mudslides closed two major routes into the Sierra on Friday, Interstate 80 and Highway 50. I-80 was reopened Saturday, but Highway 50 would be closed until at least Sunday night, the California Department of Transportation announced.

Flooding also restricted traffic on some major roadways, including Highway 99 through the Central Valley and Highway 37 in Sonoma and Marin counties.

The ground in many places simply cannot handle any more moisture.

A mudslide slammed into a house in Orinda, in Contra Costa County. Mudslides in Marin County forced a woman and her 4-year-old son to escape through a bathroom window as their house was destroyed. They were two of a handful of homes destroyed as ground gave way after weeks of relentless rain.

And a freight train carrying food derailed on Friday, sending 22 cars into the swollen Cosumnes River in Sacramento County. Flooding was a likely factor, Union Pacific told the Sacramento Bee on Saturday. The derailment caused no injuries.

“With all that water that was there, it’s not typical,” Union Pacific spokesman Justin Jacobs told the newspaper. “That whole area around (the tracks) is near a river that was overflowing.”

Levees throughout the San Joaquin Valley have broken, along the Cosumnes River south of Sacramento, Paso Creek near Bakersfield, Pacheco Creek near Hollister, and beyond, swamping homes and farmland. A dam break in Nevada’s Elko County led to flash flood warnings.

But the disaster waiting to happen that has the state transfixed is the massive hole in the Oroville Dam’s spillway. The hole, estimated at about 250 feet long and 45 feet deep, opened up on Tuesday.

Could more relentless rain be on the horizon?

The rainy weather is taking a short break in Northern California, for the early part of this week.

But the dry weather is not expected to last, according to private forecasting firm AccuWeather. Rain is likely to move back in by Thursday – another Pacific storm bringing heavy snow and relentless rain.

There should be some warm, dry weather in the days before the rain picks back up, AccuWeather said. That could allow homeowners and public employees to begin cleaning up from recent flooding and landslides.

Or it could cause new problems.

“The rise in temperatures will continue to cause localized flooding due to melting snow and ice jams in the Intermountain West,” AccuWeather Senior Meteorologist Kristina Pydynowski said. “Low-lying and poor drainage areas, as well as locations along streams and rivers are most at risk for the flooding.”

In California, that could mean more mudslides and more flooding as snow in the Sierra melts.

It’s too early to tell with any certainty what the weather might do beyond next week’s storms, but the rest of February could be wet, too, AccuWeather said.

People are already drawing comparisons to the New Year’s flood of 1997, but it’s another flood that has some people nervous.

The conditions – relentless rain and snow, plus unseasonably warm temperatures – could potentially lead to flooding like the state hasn’t seen in more than 150 years.

During the Great Flood of 1862, atmospheric rivers from the Pacific Ocean brought more than 40 days of unceasing rain and snow. They also brought intermittent warm spells that melted much of that snow.

Hyper-saturated ground unable to absorb water and snowmelt pouring out of the Sierra Nevada mountains turned the Central Valley into a massive inland lake.

That series of storms also brought relentless rain and floods to Oregon, Idaho, Nevada, Utah, and throughout the western U.S. and northwestern Mexico.

In 2011, the U.S. Geological Survey released a report, ARkStorm, that found similar flooding events happen about every 100 to 200 years on the West Coast. Studies released by the Massachusetts Institute of Technology and the University of California, Davis in the fall warned that a major flood could be coming.

Hopefully, the West will dry out a bit this week before the wet weather returns, and we’ll avoid a 100-year flood.

In the meantime, keep an eye on the National Weather Service for extreme weather alerts.