Rocks hold a record of the first day of extinction for the dinosaurs • Earth.com 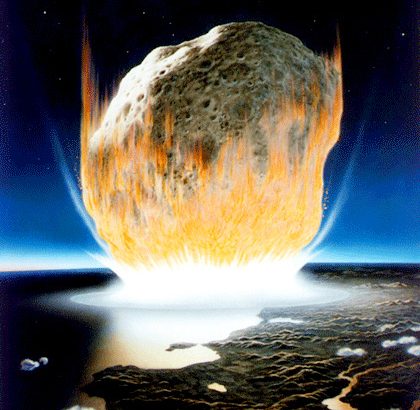 Rocks found at the impact site of the asteroid that triggered the Cretaceous-Tertiary Mass Extinction, the mass extinction event that wiped out all the dinosaurs, hold a record of the first days after the asteroid struck Earth.

It was believed that when the asteroid hit, clouds of sulfur blocked out the sun, wildfires swept through forested areas, and a tsunami traveled as far inland as Illinois.

In a new study, an international team of researchers led by the University of Texas at Austin has found evidence of the first 24 hours post-asteroid impact which confirms these Cretaceous-Tertiary Mass Extinction scenarios.

Charcoal and rocks unearthed and analyzed from the impact site are a part of a detailed rock record that tells the story of the end of the Age of Dinosaurs.

“It’s an expanded record of events that we were able to recover from within ground zero,” said Sean Gulick, “It tells us about impact processes from an eyewitness location.”

Gulick was a co-leader of a drilling expedition in 2016, and the rocks were collected from the impact site near the Yucatan Peninsula.

After the asteroid hit, the impact crater was quickly filled with rocks and debris carried in by seawater from the Gulf of Mexico. In one day, 425 feet of debris were deposited in the crater, a record-breaking rate of accumulation.

The rocks in the crater hold clues as to what happened immediately after the asteroid hit and the environmental conditions post-impact that helped kill off 75% of all life on Earth.

Researchers discovered charcoal inside the crater, which suggests that after the asteroid hit charred vegetation and debris were swept into the crater.

While a lot can be deciphered from what is in the rock samples, the absence of sulfur-rich rocks from core samples taken from the crater also relays valuable information about the extinction event.

Even though the area around the crater is abundant with sulfur-rich rocks, there is no sulfur in the crater, which helps support the theory that minerals carrying sulfur were vaporized when the asteroid made contact.

The global cooling that occurred after the asteroid hit is thought to be the most significant contributor to the extinction of life on Earth during that time.

“The real killer has got to be atmospheric,” Gulick said. “The only way you get a global mass extinction like this is an atmospheric effect.”

The study findings were published in the journal Proceedings of the National Academy of Sciences.