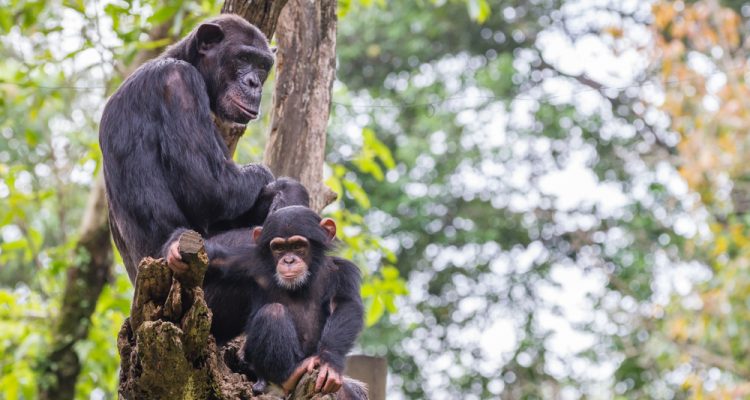 Could satellite images help save chimpanzees?

Satellite images offer an often-shocking view of how the Earth has changed over time. These images taken from space reveal deforestation, urbanization, as well as catastrophic changes caused by floods, fires, and other natural disasters. NASA images don’t just provide data; they’ve also sparked action amongst conservationists who argue that such images could help save chimpanzees.

According to Lilian Pintea of the Jane Goodall Institute, chimpanzees are experiencing a real habitat crisis due to deforestation. Images taken in 1972 and 1999 show a stunning contrast of the area around Gombe National Park in Tanzania. The region – a prime chimpanzee habitat – experienced severe deforestation during that time. The images reveal bare ground in large areas that were once covered with lush forests.

This is due, in part, to a population explosion in nearby villages. Residents have cleared land for logging, charcoal production, and agricultural use. Conservationists like Jane Goodall hope that these images will help convince locals of the importance of protecting chimpanzees and their habitat.

“It was really exciting to see the impact of these images on the villagers,” Goodall said. The photos were especially interesting to villagers because they could identify important sacred sites and landmarks on the images, providing them with a realistic view of their home and the power they have to change it. “It was like a piece of reality dropped magically from the sky,” she explained.

Lilian hopes that science can help play a part in these conservation efforts and help save chimpanzees. The satellite images help paint a picture of the chimpanzee’s habitat combined with the real-world impact of human activity.

“We are informing these planning and management efforts with science and data, including satellite imagery from NASA,” Lilian said. “But at the end of the day, it’s the villagers’ land use plan and we are there just to facilitate the process.”