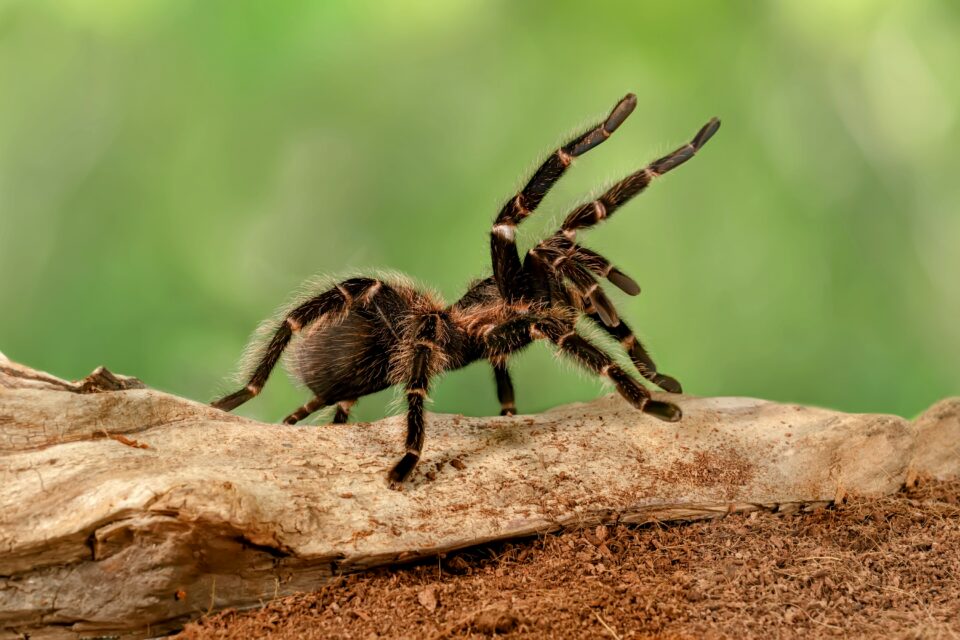 When a breeder of tarantulas noticed, in 2018, that several of his spiders were becoming sick and dying, he approached parasitologist Adler Dillman from the University of California, Riverside. The ailing tarantulas were characterized by what appeared to be a white discharge in and around the oral cavity. On closer inspection, however, it became clear that the white mass was a large infestation of nematode worms intertwined together inside and around the spider’s mouth.

Dillman and his colleagues examined the worms and, based on a combination of morphological and morphometrical data, and unique DNA sequences, they identified a new species of nematodes. There are more than 25,000 different species of nematode worms and they are among the most abundant animals on Earth. They parasitize a wide range of living organisms, but this is only the second time that a species has been found to infect tarantulas.

The scientists named the new species Tarantobelus jeffdanielsi, after Jeff Daniels, the American actor, musician and producer. They named it in Daniels’ honor because his character in the 1990 film ‘Arachnophobia’ saves a town from a deadly infestation of spiders.

“His character in the film is a spider killer, which is exactly what these nematodes are,” said Dillman, who led the team that discovered the nematode.

“When I first heard a new species of nematode had been named after me, I thought, ‘Why? Is there a resemblance?’” joked Daniels. “Honestly, I was honored by their homage to me and ‘Arachnophobia.’ Made me smile. And of course, in Hollywood, you haven’t really made it until you’ve been recognized by those in the field of parasitology.”

The scientists investigated the lifecycle of the worms, and where exactly they resided in the infected spiders. They found that infestations of worms occurred in the mouth area and on the pedipalps, special appendages near the mouth that the spiders use to sense and manipulate food. No worms were found in the stomachs of infected spiders.

Once infected, spiders lost the ability to use their jaws and feed themselves, and began to show strange behavior, such as walking on the very tips of their legs. The infection would ultimately prove fatal for a tarantula, as it would starve to death.

“It may take months because tarantulas don’t have to eat particularly often. However, if they get this infection, they will die of starvation,” Dillman said.

When culturing the nematode worms in the laboratory, the researchers noted that they ate bacteria such as E. coli and did not appear to feed off the parasitized spiders themselves. This led the researchers to conclude that the worms may be feeding on the bacteria found around the oral cavity of the spider.

However, there is not yet an understanding of how the worms change tarantula behavior or render the pedipalps and jaws non-functional. Dillman is planning additional studies to investigate this, as well as how breeders can treat or even prevent infections in their captive-bred tarantulas.

The researchers found that the average lifespan of jeffdanielsi nematodes in the laboratory was 11 days. These worms are mostly hermaphrodites – each individual produces sperm as well as eggs. Furthermore, they fertilize themselves and each produces approximately 160 offspring within its 11-day lifespan.

Although this is only the second time that nematode parasites have been found infecting tarantulas, Dillman feels this reflects the fact that little research is done on these spiders. Nematode worms are very common parasites and it would be unusual if there were no species that parasitized tarantulas.

“Nematodes have been around for hundreds of millions of years. They’ve evolved to infect every kind of host on the planet including humans,” he said. “Any animal you know of on planet Earth, there’s a nematode that can infect it.”

The team’s work describing jeffdanielsi has recently been published in the Journal of Parasitology.