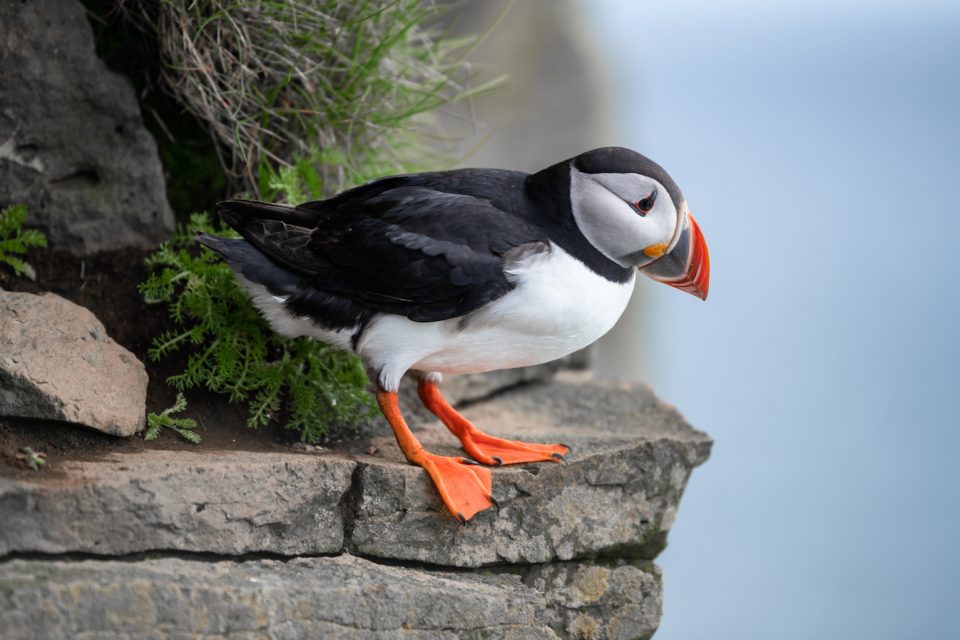 Puffins are a mystery to humans. There are three species of puffins worldwide and rhinoceros auklets are also anatomically puffins, according to Audubon Project Puffin. All of them spend the vast majority of their lives at sea.

A life at sea is one that’s difficult for land based Homo sapiens to study. When puffins are on land, it’s to create burrows as deep as five feet in the sea cliffs. The burrows are the center of a puffin’s domestic life After mating, puffins lay eggs and raise their young to fledging age in the moist earth of their burrows. After but a season, returning to land daily with fish for chicks or to keep an egg warm, the puffin returns to a life of sea and sky.

According to IUCN Red List, all species of puffins are declining in number but only Atlantic Puffins are listed as ‘vulnerable’ while the other puffins are listed as ‘least concern’. But a lot of the puffin’s conservation status is speculation based on relatively old science. As Earth.com reported recently, Atlantic Puffin populations on Farnes Island, the host of England’s largest puffin colony, are on the rise. The last global population estimate for the Tufted Puffin (Fratercula cirrhata) was 3,500,000 adult individuals, but this was carried out in 1996, a long time ago by the standards of science.

Tufted Puffins range up the western coast of the United States from the middle of California north into and across the entire coast of Alaska. Much of the areas Tufted Puffins breed in are remote islands in Alaska, such as Middleton Island where I spent a summer collecting data on sea birds, including tufted Puffins. Many islands that puffins choose for nests are even smaller than Middleton, little spits of land taken over seasonally by flocks of birds, squawking, flapping, fighting for the best pieces of land to nest. Some like Murres will lay delicate eggs directly on slender slices of cliff face. Even the areas where puffins and other sea birds nest on mainland in Alaska and elsewhere are remote, rugged, far from human habitation and hard to visit for extensive research or even for a census of the birds.

Earth.com also recently reported on a massive die-off of tufted puffins in St. Paul Island, Alaska. Researchers estimated that between 3,150 and 8,500 puffins died. The first alert of the die-off came from tribal and local peoples on St. Paul that collected 350 dead puffins and alerted scientists. The puffins were emancipated from starvation, which researchers suspect was caused by warming oceans. Puffins and other sea birds are important indicators of the health of the oceans they live in. The data I spent a summer collecting was important for understanding sea birds but equally important for understanding Alaska’s fisheries.

Plankton is near the base of the food chain in Alaska’s marine ecosystem and it can be quite sensitive to changes in environment. Alaska Public Media reports that plankton in Alaska usually react to environmental changes unambiguously, either flourishing or taking a big hit. Plankton populations are also often directly tied to populations of pink salmon and other fish.

Alaska Ocean Observing System explains how plankton populations are tied to temperature. As we all know with gases and fluid, the warm rises to the top and the cold stays low, and the same is true with water in the ocean. During the Alaskan winter, the surface of the ocean cools and water from deep in the sea rises upwards, bringing nutrients with it. The nutrient rich water sustain the (photosynthetic) phytoplankton through the dark Alaskan winter until summer when Alaska gets increased sunlight. With enough sunlight, the plankton switch to photosynthesis for food and boom in populations.

With the boom in plankton, other microorganisms, such as copepods and zooplankton, start a feeding bonanza on the phytoplankton, and in turn grow in numbers. Of course, the burst in numbers of microorganisms has a ripple effect throughout the food chain. Fish eat and multiply, puffins, auklets, kittiwakes, cormorants and other sea birds eat the fish, using the food for their own egg laying and chick rearing.

But a warmer ocean in the winter is a problem. When the ocean surface is warmer in the summer, the warm layer of water blocks the now cooler waters from deep in the ocean from welling up. In the summer of course this isn’t a problem because phytoplankton can photosynthesize. The winters in Alaska though are very dark and photosynthesis isn’t an option. When it’s too warm for the nutrients from deeper in the ocean to rise to the surface, this leads to a lack of plankton come spring and summer in Alaska. Less plankton means less birds, including puffins as well as lower numbers of many other animals such as seals that all depend on the plankton.

Other sea birds have seen recent massive die-offs. Audubon reported in 2018 that many thick-billed and common murres failed to breed at all, leaving colonies usually filled with a cacophony of birds eerily empty of eggs. Some murres nested but a month late. Hundreds of birds from a few different species were found washed up on the shores of the Bering Sea, all dead from starvation. Since the start of monitoring in the 1970s, Murres had never failed to breed until four years ago and it’s an indication of bigger problems.

Sea bird die-offs are becoming more common. National Geographic reports that other marine animals in Alaska are being found dead in increasing numbers as well. On average years in the western Gulf of Alaska, eight dead whales are found, but in 2015, twelve where found in June by itself. Large numbers of sea lions have starved recently on the west coast. 79 otters were found dead in a single month in Homer Alaska. All this death coincides with record heat temperatures in the ocean even though the temperatures are being pushed up just a fraction of a degree so far. The ocean can absorb a lot before changing temperature but it is unquestionably warming now and puffins are simply canaries in a coal mine no one wants to be in anymore.