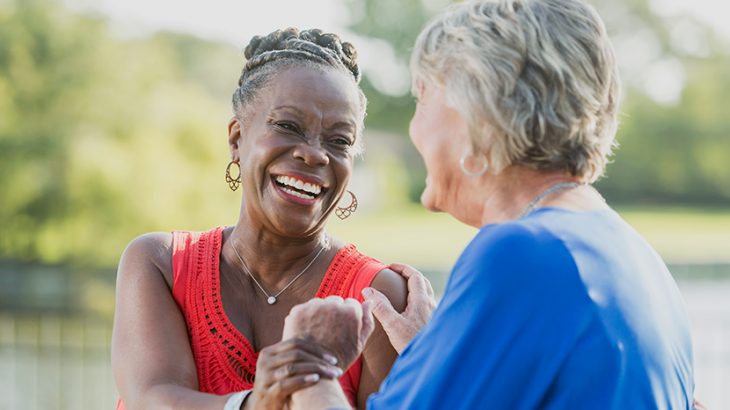 Social isolation and loneliness pose major health risks to older adults, and research has shown that social isolation is as bad for your health as smoking 15 cigarettes a day.

As further proof that social interaction plays a key role in health and well-being, a recent study found that having an active social life and interacting with a wide range of people increases physical activity and emotional well-being among older adults.

Researchers from the University of Texas at Austin conducted the study which was published in the Journals of Gerontology Series B: Psychological Sciences and Social Sciences.

Interacting with family, friends, acquaintances and even strangers was linked to being more physically active, having a better mood, and positive outlook, and spending less time sitting around the house.

“Adults often grow less physically active and more sedentary as they age, and these behaviors pose a risk factor for disease and death,” said Karen Fingerman, a member of the research team. “It is difficult to convince people to go to the gym or commit to work out on a regular basis. But they may be willing to reach out to acquaintances, attend an organized group event, or talk to the barista who serves them at their favorite coffee shop.”

More than 300 adults over 65 years old from the Austin, Texas metro area took part in the study.

Every three hours over a week, the researchers asked the participants about their social encounters and activities.

When the participants reported that they had interacted with a variety of people, the researchers noticed that participants spent more time out of the house and walking around.

This study is the first of its kind to show how social engagement gets people out and about, and the research also shows the benefits of interacting with a wide and varied social circle.

While family and friends are a crucial source of support, the researchers found that acquaintances and strangers were more likely to motivate someone to be more active.

“Prior research on aging has focused almost entirely on the benefits of social connection with close social ties such as a spouse or an adult child,” said Debra Umberson, a co-author of the study. “This new research relies on truly novel data that capture both the amount and quality of contact with all types of people that the elderly encounter throughout the day — and the results show us that these routine encounters have important benefits for activity levels and psychological well-being.”