Some fish thrive in chaos, and it gives them the upper hand • Earth.com 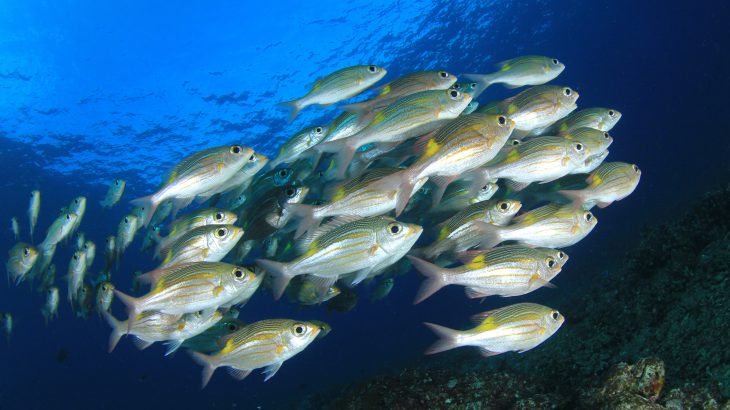 A study from the University of Bristol is providing new insight into why fish shoals are constantly shifting from order to disarray. The experts discovered that some individuals thrive in disorderly conditions are quicker to find food.

About one quarter of fish cluster together in groups part of the time, while half of fish use this strategy all the time.

Shoaling fish swim loosely together, but can coordinate their movements at anytime to transform into a synchronized school of fish.

Remarkably, fish can transition from schooling back to shoaling – or back again – in a matter of seconds.

In the Bristol study, the researchers found that certain fish perform better when there is less structure in the group. These individuals are more observant and faster at foraging when the group is in a state of disarray.

In addition, the more conformative fish benefit from following along with the chaos and exploiting the work of disorderly fish.

“We know how animals behave in collective formations, but the benefits of this are less well understood,” said study lead author Dr. Hannah MacGregor.

“The findings of our study are intriguing because they reveal why swarm-like fish shoals are in a constant state of flux, as each fish vies for order or disorder to hold sway depending on the state in which they individually perform best.”

“It was surprising that the unruly, more disruptive fish can have a competitive edge when it comes to foraging, since they are more alert and able to seek out new food sources which might escape the attention of others.”

The study was focused on 12 groups of three-spined sticklebacks. Over the course of a month, the researchers conducted experiments to investigate how quickly fish could locate a food source that appeared suddenly and sporadically.

The same groups were tested multiple times so that the experts could measure the performance of individual fish under both orderly and disorderly conditions.

“The disorderly ‘first responders’ to the food were quickest and in the minority. It was fascinating to see not only how individual styles varied, but also that the fish generally swam in their shoals in the way that was most advantageous for themselves,” said Dr. MacGregor.

“Those that thrived in disorder tended to swim less aligned to their neighbors, suggesting they may try to disrupt the shoal in case more food appears.”

When fish strike out in a structured group, they have the advantage of sharing information about the location of food. Fish that rely more on this strategy benefit from a highly organized formation that effectively transmits information.

However, the study revealed that some fish are gifted with the ability to detect food on their own with no input from their shoal mates.

These individuals perform better without the constraints of an organized group that moves in the same direction while forgaing.

“Highly organized shoals offer better access to social information and protection from predators. But our research indicated that orderly group behavior may not always be a good thing when foraging if you are a fish that is very good at obtaining your own ‘private’ information about new food resources,” said Dr. MacGregor.

“Conflict between individuals over the preferred organization of the group could explain why shoals of fish spontaneously transition between orderly and disorderly collective behavior, as they swim to their different strengths.”