Spring rainfall is an unexpected source of pollen • Earth.com 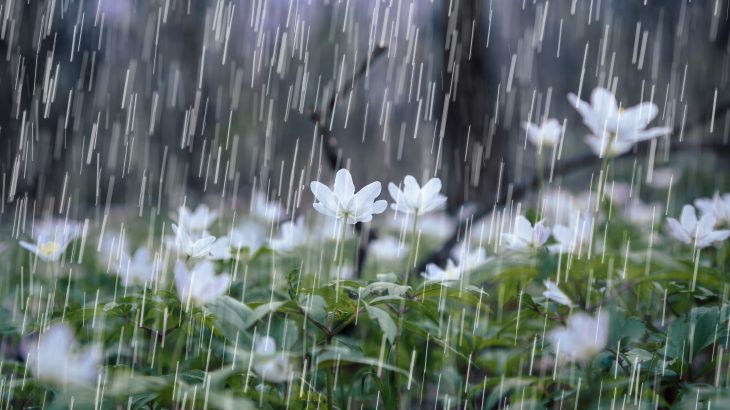 Spring rainfall is an unexpected source of pollen

Researchers at the University of Iowa have revealed that spring rainfall stirs up microscopic particles of pollen that linger in the air for hours after rainfall subsides.

This is an unexpected discovery, and disappointing news for allergy sufferers, because spring rains are expected to offer some relief from high pollen counts.

The experts found that tree pollen fragments remain airborne for up to 11 hours after heavy rains. The microscopic granules can enter deep into the lungs, potentially triggering an allergic reaction or respiratory effects.

The findings are based on direct measurements of pollen fragment concentrations during and after spring rains in 2019.

“People who are sensitive to pollen in season should avoid going outdoors during rain events, especially thunderstorms, and for several hours afterward.”

Pollen grains tend to rupture when exposed to humidity. The grains are pulled up to the cloud base in the storm’s updraft, and then propelled back to the ground in the downdraft and falling rain.

Pollen fragments, however, are much smaller than pollen grains and do not settle as easily. While pollen grains are 20 to 100 microns in size, tiny pollen particles are less than 2.5 microns.

During the peak tree pollen season in April and May of 2019, the researchers set out to obtain direct measurements during and after various rainfall events in Iowa City, Iowa.

The team documented pollen concentrations for a variety of weather conditions, ranging from light rains to a severe thunderstorm that produced a tornado.

“Our study shows clearly that rain decreases intact pollen concentrations. But it can also increase pollen fragments,” said Professor Stone. “The interesting thing about the pollen fragments is the really high concentrations only last for a short period of time, primarily when it’s raining and during the peak of the storm.”

The researchers determined that pollen fragment concentrations remained suspended in the air for anywhere from 2.5 to 11 hours after spring rainfall. The heavier the rains, they found, the longer the particles will linger.

“People who are susceptible or have allergies to pollen in season should consider rain events and especially thunderstorms to be a potential source of allergenic particles that could have negative respiratory impacts on them,” said Professor Stone. “My advice would be to stay indoors during and in the hours following rains and thunderstorms in the pollen season that they’re allergic to.”

The study was published in the journal Environmental Science & Technology Letters.