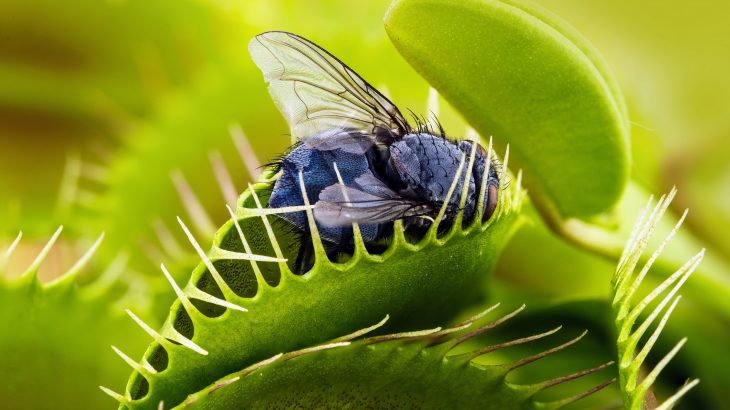 A study from the Salk Institute is providing brand new insight into how Venus flytraps and other plants sense touch. The experts have identified a key protein that helps carnivorous plants sense and respond to a touch from their prey.

The slight brush of an insect is all it takes to trigger a Venus flytrap to snap shut. Even though this fascinating ability has been widely studied, the underlying molecular mechanisms remain a mystery.

“Because they’re so unusual, people have been interested in these plants for hundreds of years, so there’s quite a bit known about them at the gross, macroscopic level, but the molecular details have been hard to tease out,” said study co-author Carl Procko.

The new findings could help scientists better understand how plants of all kinds sense and respond to mechanical stimulation, and may ultimately be useful for medical applications.

“We know that plants sense touch. The Venus flytrap, which has a very fast response to touch, provides an opportunity to study a sensory modality that historically has been poorly understood,” explained study co-author Joanne Chory.

For their investigation, the researchers cloned Venus flytraps to get plants that were genetically identical. Next, they carefully cut thousands of microscopic, touch-sensitive trigger hairs from the plants and used sequencing technology to identify which proteins were most abundant in the hairs.

Based on previous research, the team speculated that the proteins involved in sensing touch were likely to have the capability of moving an electrical current across the cell. As expected, this type of protein was the second most common type found in the hairs.

To test the protein, which is now referred to as FLYCATCHER1, experts at Scripps Research introduced it to mammalian cells. The experiment revealed that the mammalian cells responded by producing an electrical current when they were touched. This confirms that the protein is sensitive to mechanical stimuli.

The researchers discovered the same protein in the tentacles of the sundew, a close relative of the Venus flytrap.

“These findings are further evidence that the FLYCATCHER1 protein plays a critical role in the trigger hairs of the Venus flytrap and the mechanisms of the plant that sense and respond to touch,” said Chory.

Next, the experts will conduct a “knockout” test with genetically modified flytraps that are  missing the protein. If the modified flytraps lack their sense of touch, it will prove that FLYCATCHER1 is responsible.